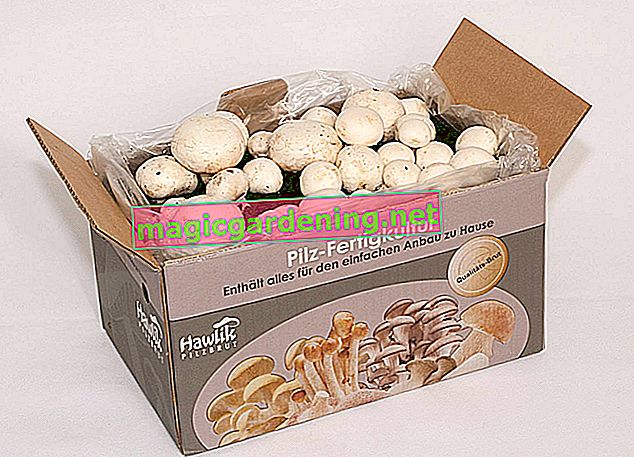 Climatic conditions as a basic requirement for cultivation

Mushrooms are ideally grown under uniform climatic conditions in order to achieve a high yield. Therefore, the following growing areas are particularly suitable for cultivating mushrooms:

Since regular watering creates a certain level of air humidity with a larger extension, the selected room should not be structurally sensitive in terms of moisture. Temperatures of around 15 to 20 degrees Celsius are ideal for white and brown mushrooms to thrive. Although mushrooms grow in light, they also thrive in complete darkness and can thus grow free from any weeds.

Usually, already prepared boxes made of Styrofoam or cardboard are offered with instructions in the trade, the substrate of which has already been inoculated with a mushroom mycelium. Some of these can also be set up directly in the apartment, as they usually have a lid to regulate the humidity. If you want to propagate mushrooms on a larger scale, boxes with a spore-free coconut substrate or straw bales are ideal for growing mushrooms.

Divide the straw bales to a minimum height of about 15 to 20 centimeters and moisten them with water before placing them on shelves or racks in the planned grow room. Then inoculate the pads with the mushroom spores to induce the growth of the mycelium. This grows through a straw bale in mushrooms within about two to three weeks. Then, depending on the conditions, the fruiting bodies can protrude from the bale within a few days for harvest.

Cultivation without a starter culture

If you would like to experiment with the cultivation of edible mushrooms on a smaller scale, you can start a corresponding experiment without a starter set from the trade. Since spores sometimes adhere to commercially available mushrooms, you can apply leftover mushrooms to a bale of straw or some other moist substrate. With this technique, too, the desired success of mushroom growth is sometimes achieved.

The beginnings of the cultivation of mushrooms go back to the court of the French Sun King Louis XIV. He valued the edible mushroom so much that his court gardeners made the first attempts at growing forest and meadow mushrooms in cellars. Later, the branched catacombs under the metropolis of Paris were partly used for the commercial cultivation of mushrooms, as the conditions in terms of temperature and humidity were ideal for cultivation.