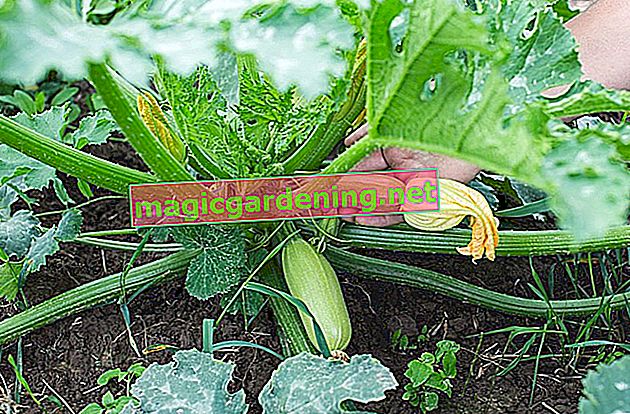 The experts argue about this. Some believe that directly sown plants are stronger, healthier and more resilient than those that have been grown earlier, while others believe that previously grown plants bear fruit faster. It is not easy to answer who is actually right - you have to try it out for yourself. Because which method is more successful depends above all on the nature of the soil and the local climatic conditions. In northern German regions, for example, it usually makes more sense to prefer plants, while direct sowing shows better results in southern Germany.

In order to sow Hokkaido seeds directly outdoors, the first thing to do is to dig up, loosen and fertilize the soil well. It is best to put plenty of manure into the soil in autumn before the planned sowing - this then has plenty of time to rot until spring and thus enrich the soil with nitrogen. Two to three seed kernels are placed in a small hollow about one centimeter deep and loosely covered with substrate. Always keep the bed moist, but not wet. You will see the first delicate tips after about one to two weeks, provided it is warm enough. If several seed kernels have emerged per seed hole, you have to remove the surplus plants as quickly as possible.

Hokkaido can be brought forward on the window sill at home from around mid to late March. To do this, put one or two seeds per plant pot in appropriate potting soil, whereby the seeds should be about one to two centimeters deep and loosely covered with soil. Spray the soil with room warm, stale water and cover the pot with cling film. The pot should be in a warm, sunny place. The plants will germinate within one to two weeks and grow very quickly. From mid-May, the strong pumpkin plants can finally go into the field.

You need this for growing your pumpkin plants

Pumpkin goes well with spring onions, vegetable onions, lettuce, corn and runner beans. On the other hand, it makes less sense to socialize with other types of pumpkin, especially with ornamental pumpkins. Pumpkins are cross-pollinated and Hokkaido pumpkins fertilized with inedible decorative pumpkins are also inedible.