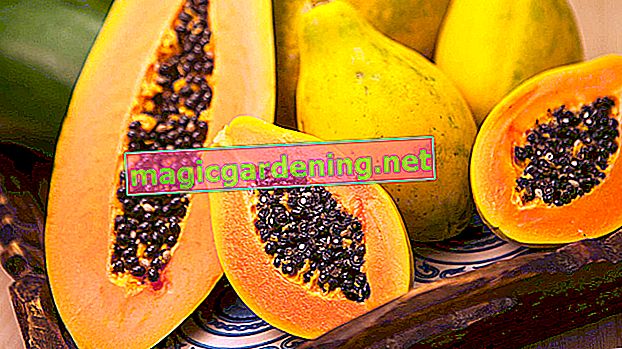 In fact, there are also negative effects of certain plant and fruit components on human health related to the cultivation and harvesting of papayas. This primarily concerns:

The milky sap that escapes when the papaya is removed from the tree is poisonous and irritates the skin. In allergy sufferers and sensitive people, the pollen of a papaya flower can sometimes lead to violent reactions. Papaya seeds that were eaten immature are said to have led to temporary sterility in men in the growing areas.

If the seeds of papaya are obtained from fully ripe fruits, consumption is generally known to have only positive effects on the human body and the immune system. The enzyme papain contained in the seeds is considered to be detoxifying and beneficial for the metabolism due to its splitting effects on proteins and fats. Also, according to studies, they are said to be extremely effective at fighting intestinal parasites. In addition, the papaya seeds are also interesting in terms of taste when they are used in dried form as a hot spice like pepper.

Dry and store the papaya seeds

Before drying, the seeds must first be cleaned of any pulp. The easiest way to do this is to gently rub the seeds between sheets of paper towel. You can then dry the seeds on a baking sheet in the oven at around 50 degrees Celsius for two to three hours before placing them in an airtight container for storage.

You can put the dried papaya seeds in a pepper mill like pepper and grind them with it. For the intestinal cleansing effect, around four to five seeds should be chewed several times a day.