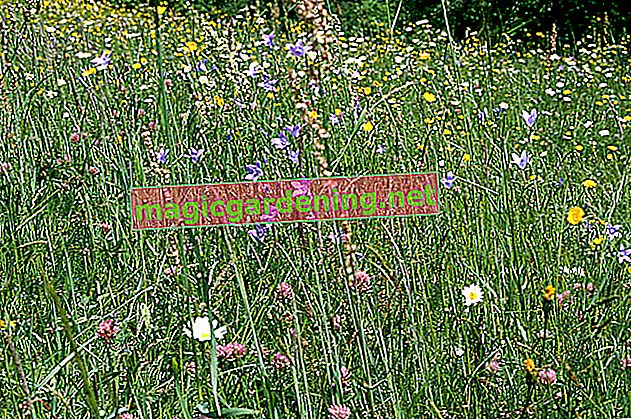 Wanted poster for the meadow or red clover

Reasons for use as green manure

The meadow clover and other types of clover can be used as green manure in the garden or in agriculture, as they ensure an enrichment of nitrogen in the soil via the nodule bacteria attached to the roots. In addition, the impressive root length of the red clover also ensures that compacted soils are loosened deeply and thus prepared for the subsequent cultivation of useful plants. When using red clover as a green manure in the garden, however, it should not be exaggerated, otherwise it can sometimes lead to an infestation with the clover shrew. It is a beetle whose larvae eat holes in the shamrocks and also feed on the flowers.

Use the meadow clover as a natural remedy

The meadow clover is edible like other types of clover, but due to the oxalic acid it contains, consumption should not exceed a certain level. The flowers of the red clover are commonly used as a decorative and tasty ingredient in the following dishes:

You can sow the red clover in pots for use in the kitchen or germinate it in a special sprouting device for sprouts. Then the seedlings can be used like cress after about 5 to 8 days. The red clover is said to have health-promoting effects in the following clinical pictures:

The flowers of the meadow clover can be dried and used for the preparation of teas. For this, 2 heaped teaspoons of meadow clover flowers are scalded with a cup of hot water. After about 10 minutes you can strain the flowers and, if necessary, sweeten the tea with a little honey. Do not drink more than 3 cups of red clover tea per day and do not follow the red clover regimen for more than 5 weeks.