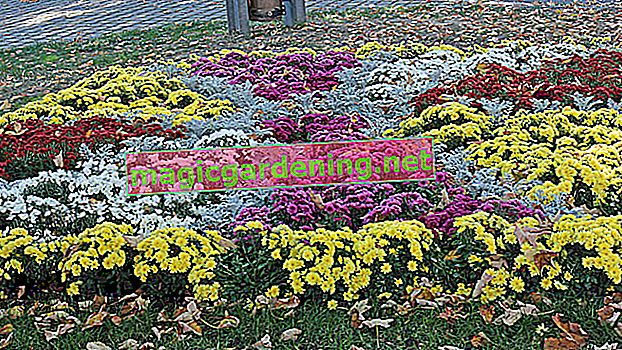 What are the advantages and disadvantages of mulching with bark mulch?

In fact, mulching with bark mulch has both advantages and disadvantages that should not be left unmentioned. The material keeps the moisture in the soil and prevents premature drying out during dry periods. Furthermore, bark mulch reduces the occurrence of weeds on the bed, which in turn saves you a lot of work. However, this effect should not be overestimated, because as a weed protection layer you would have to apply the bark mulch much thicker than just three to four centimeters. In addition, bark mulch is an organic material and as such rots very quickly - but it removes valuable nutrients, especially nitrogen, from the soil. These, in turn, are missing from the often heavily consuming flowering bushes. The previously bound nutrients are only released again after they have rotted completely.

What should you watch out for when applying bark mulch?

However, this disadvantage can be compensated for by applying a suitable slow release fertilizer before mulching and thus ensuring that the plants are adequately supplied. A thick layer of compost under the mulch material also fulfills this purpose, so that you do not necessarily have to resort to mineral fertilizers. Also, be careful not to apply the bark mulch layer too thick: three to four centimeters is sufficient. So that weeds still don't stand a chance, you should thoroughly weed the bed beforehand and, above all, remove root weeds thoroughly. By the way, you can also cover with bark mulch for onion flowers (which include many typical spring bloomers); this layer - if not too thick - can easily be pierced in spring.

However, you don't necessarily have to cover the flowerbed with bark mulch. Lawn and chopped hedge cuttings as well as straw are particularly suitable for the supply of nutrients. If, on the other hand, the bed is to be designed to be easy to care for, the creation of a gravel or stone bed is recommended.

In winter, bark mulch is an effective means of covering the bed and protecting the roots of the plants in it from frost.