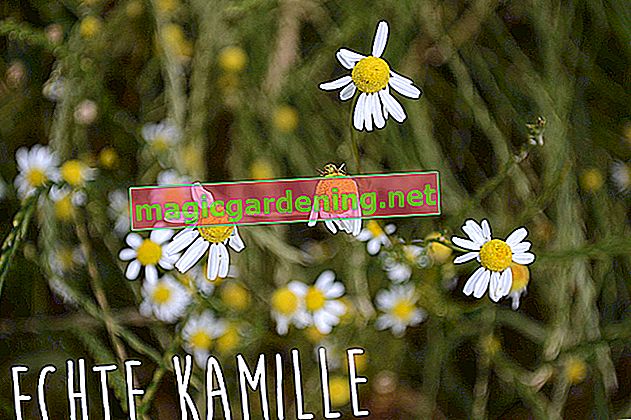 The chamomile is widespread all over Europe and grows both in mountainous heights of up to approx. 1,600 meters and in the northern German flatlands. You will find the herb, which grows rapidly, in sunny and warm locations on the edge of fields, roadsides, on meadows and fields, on walls, wasteland and rubble sites. However, it is important not to collect wild chamomiles carelessly, as many fields and meadows are treated with pesticides and other harmful chemicals. Chamomile treated in this way cannot be used as a medicinal plant, nor are plants growing close to busy roads.

The chamomile blooms from around May to September, and you should collect the flower heads as early as June / July - the content of the valuable essential oils is highest when the flowers have already had some time to ripen. but are not overripe either. You can recognize the optimal time when around two thirds of a chamomile population is already in bloom, but a few buds are still closed.

You can distinguish real chamomile from other types of chamomile by the following typical characteristics:

The most important distinction is as follows: Use a sharp knife to cut a flower base from top to bottom. it should be more or less hollow inside. Both the false chamomile and the dog chamomile have rather flat, filled flower bases.

To prevent mix-ups and to avoid contamination with pesticides and the like, grow real chamomile in your own garden. You can also simply collect ripe flower heads in nature and simply drop them in the garden - they will practically seed itself.