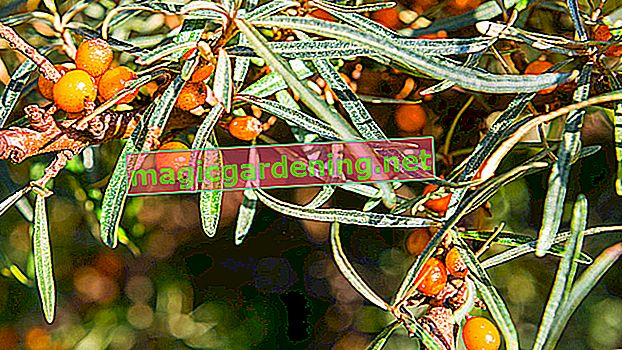 When is the best time?

The sea buckthorn berries are usually ripe and ready for harvest between September and October. Some varieties such as Sirola and Hergo ripen as early as August.

In principle, the harvest is possible until December or, with luck, until spring. But waiting brings with it the risk that the fruit will begin to ferment, taste rancid or be eaten by wild animals.

The berries are ripe when they have acquired their bright orange to orange-yellow color. As soon as the color of the fruits fades or fades, they lose quality and their taste suffers.

It depends on the technology

Harvesting the sea buckthorn berries is not one of the easiest actions in the garden. Due to the numerous thorns on the branches, injuries quickly occur when picking. For this reason, you should wear gloves such as sturdy rose gloves when harvesting. There is also a risk that the berries will burst and the juice will ruin your clothes.

And this is how the professionals do it: The fruit-bearing branches are cut off with secateurs and frozen at home. The next day or later, they are taken out of the freezer and the berries are shaken off. An alternative is to cut off the branches and scrape the berries with a fork.

In addition, you can spread a tarpaulin under the load-bearing sea buckthorn bush. Then gently shake the bush, which will cause the ripe berries to fall. Then they just need to be picked up.

And after the harvest?

If you cut off all the branches, you don't have to cut back the bush later. Many kitchen creations can be made with the berries. They can be eaten raw, but then usually do not suit most people's taste.

They are suitable among others:

If the bright orange berries are not picked, native birds and small mammals like to attack them. They are therefore a valuable source of food for wintering in our regions.