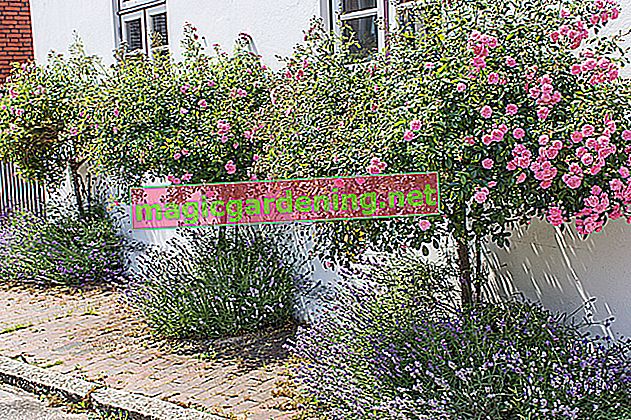 How to cut standard roses correctly?

Tree roses are by no means a separate class of roses that somehow need a special cut, but simply bed or shrub roses grafted onto a trunk. For this reason, you cut rose stems exactly as you would cut the refined variety in the form of a low rose bush.

Most of the standard roses are severely pruned to one or two eyes between the end of March and the beginning of April, as is the case with the bed roses, only soft shoot varieties are only thinned out. When cutting, make sure that the shape of the crown becomes round and compact. To do this, cut the side shoots a little shorter than the middle shoots. In addition, remove the weaker part of intersecting shoots and severely shorten weak and thin branches or cut them back to the base.

Cascade roses should not be pruned at all for the first three to four years (except, of course, to remove diseased or frozen shoots in spring). After that, the pruning is less hard in order to preserve the trail-like growth character of the crown. To do this, leave the strong shoots that form the basic structure and only shorten the side shoots to one or two eyes. Note that varieties that flower more often are cut differently than those that flower once! You cut more often blooming roses like climbing roses, once blooming roses are only thinned out after blooming.

Thorough hygiene measures can curb the spread of diseases such as rose rust and black soot. Cutting waste should not be composted or shredded; it is also better not to leave the leftovers on the beds. only use clean and sharp cutting tools and disinfect the rose scissors with alcohol in between.

In the case of rose stems grafted with more frequently blooming rose varieties, dead shoots should also be removed in summer in order to stimulate the development of more flowers. You can prevent a blooming break after the first pile in June with so-called pinching, in which up to a third of the shoots with flower buds are removed.