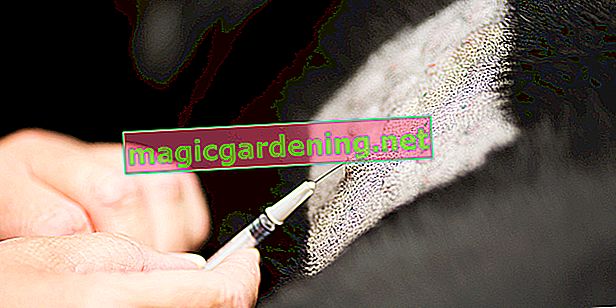 Typical diseases of the birch

Most birch trees are susceptible to fungal attack. Moss infestation and pests such as fringed wings and aphids are also causing problems for the picturesque trees. In most cases, however, you do not need to intervene as a garden owner. Only in rare and extremely pronounced cases is the use of a plant protection product advisable and necessary in the event of fungal or pest infestation.

The first symptoms are withering flowers and leaves. In the process, the trees can die. There are only limited options available for fighting on your own, mainly cutting out the affected shoots, the earlier and more generously, the better. Other diseases in the birch include rust and powdery mildew. However, they do little harm and require no intervention.

Appearances of death at the base of the birch

More and more often, native birch trees show a strange black discharge on the trunk, which later turns into a blackish crust. These noticeable visual signs usually result in a general decrease in the vitality of the tree. This is followed by signs of death in the crown. If you don't want to let the majestic birch die, you should act when black spots appear. In most cases it helps to check the site conditions. Overall, it is important to keep an eye on the course, especially if the dying tree can become a traffic or safety hazard.

If your birch tree shows symptoms of illness such as black spots, an optimization of the location suggests itself. Of course, you can't move the adult tree. However, unfavorable weather conditions usually play a decisive role. If the conditions are either too wet or too dry, follow-up problems such as rot can occur. If the light-hungry tree does not get enough sun, you may also be able to intervene.

In an emergency, initiate an expert investigation

If you want to be on the safe side with particularly large trees and inexplicable symptoms, you can have a tree examined by a specialist. The responsible green space office has the necessary addresses or carries out the analyzes itself.