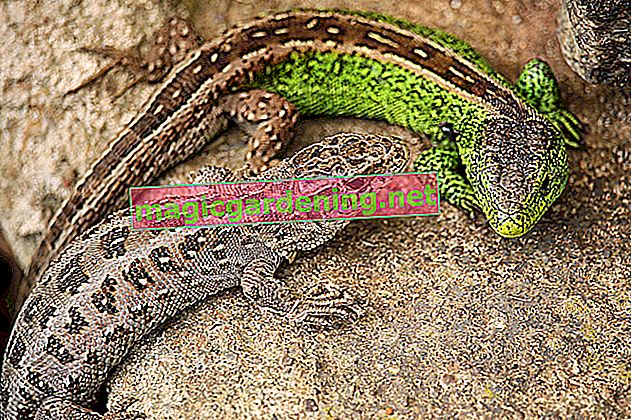 How to spot a scarab beetle in time

White grubs do not eat plant roots for years, but instead feed on humus. Only from the second year onwards do the larvae feast on the fine roots (and, depending on the species, also on other plant residues) in order to dig up to 60 centimeters deep into the ground and pupate. They remain in this state for another one to two years. While the adult beetles can be spotted quite quickly - and eggs are likely to lay - the grubs are often only discovered by chance.

The plants on the infested areas seem to die without any cause. If you can rule out other reasons, the grub infestation can be substantiated quite well with a test excavation on the affected area: The yellowish-white larvae are in the excavation. By the way, you don't have to dig particularly deep, because the animals are only a few centimeters below the surface of the earth. Prevention is better than fighting

You can prevent an infestation with scarab beetles and their larvae with a few specific measures. However, these methods are not 100% safe. The most important thing is not to leave any lights on in the garden during the main flight time of the various species: the animals, which are usually active at night or at dusk, are attracted to it and prefer to lay their eggs near the light sources. Other useful ways of prevention are:

To protect lawns from death caused by grubs, you should scarify the sward regularly. If that doesn't help either, you should remove the dead lawn, dig up the area deeply and sow again.

“Collect the cockchafer and tear off their legs and wings. Then toast them in hot butter until they are crispy. Then cook them in chicken soup. " (Centuries old recipe for cockchafer soup)

If the damage is already visible, the plants that have been eaten by grubs cannot be helped. Since the larvae eat the underground roots, the above-ground parts of the plant can no longer be supplied and dry up. In addition, cockchafer larvae occur in abundance - wherever you find a maggot, there are certainly many others in the ground. So it's no wonder that the previous numerous populations were collected and processed into a nutritious cockchafer soup - perhaps your grandparents still know this.

The following options are available in the garden for effective control.

In earlier times, one of the main occupations of children during the summer months was collecting cockchafer and their larvae. Even today, the method is effective for the hobby garden, even if it is laborious and time-consuming. The easiest way to collect the grubs is after a heavy downpour, because then the animals come to the surface and can be easily picked up. Such rain can be imitated artificially by vigorously watering the infested areas.

Alternatively, you can simply dig up the soil interspersed with white grubs and thereby bring the larvae to light. This method also has the advantage that the soil is loosened and weeds are removed.

Nematodes are available on the market especially against the larvae of May or June beetles, which reliably kill the pests. These are microscopic roundworms that are delivered in clay granules. Simply mix the granules with the irrigation water and water the affected areas in the garden extensively. The roundworms become active in the soil, penetrate the grubs and kill them. One of the best ways to get rid of pesky grubs is to make the garden inviting to hedgehogs, moles, bats, and birds. The fat maggots and the adult beetles like to eat them and thus keep the population low in a natural way. Mice, martens and large ground beetles also like to eat grubs. So that the beneficial insects feel good, install

If you are also the happy owner of a flock of chickens, you can let them run over fallow beds in spring and autumn and across meadows and lawns all year round. The animals specifically peck the grubs out of the ground.

Some pesticides are approved for the home and hobby garden as well as for the lawn, which reliably remove the grubs. These include, for example, products made from the seeds of the neem tree native to India, the toxic ingredients of which prevent the larvae from developing. However, you should not use insecticides if possible, as these - regardless of whether they are chemical or natural agents such as neem oil - always have serious effects on the entire ecosystem in the garden and thus also beneficial animals.

Just because a product bears the label “natural” does not mean that it is safe. After all, nature itself produces the most harmful poisons and is therefore anything but “gentle”.

What are scarab beetles?

The scarab beetles (lat. Scarabaeidae) are a very large and complex family within the order of the beetles (lat. Coleoptera). Around 27,000 different species in around 1,600 genera belong to the beetle family found worldwide, which look very different on the outside and can range from a tiny two millimeters to a strikingly large 16 centimeters in length. Not all species pose a problem in the hobby garden, some - such as the rhinoceros beetle, which is threatened with extinction and therefore under nature protection - are also considered beneficial insects.

Typical species of scarab beetles that are relevant for the garden are the following:

For many centuries, the cockchafer in particular was decried as a pest and every year, the immense feeding activity of its grubs could cause considerable damage - and thus also famine. Nowadays the cockchafer has become rather rare due to drastic measures, mainly in the 1950s and 1960s, but still causes great damage in warm years and in certain regions. The following video shows the newly emerged problem quite impressively:

Typical appearance of the scarab beetle

The scarab beetles mentioned above look very similar, so that mix-ups cannot be ruled out. However, an exact determination of the species that occurs in the garden is important, because otherwise the control measures could fail - not every small beetle reacts as desired to the eradication methods introduced. For this reason you will find some relevant clues for the exact identification of the species in the following table: Scarab beetles show very different ways of life and dietary preferences. In addition to the grubs that live on plant roots, there are species that live primarily on dead wood or collect dung. The latter group includes, for example, the various dung beetles or the species known as “pill-turning”. Some Scarabaeidae are extremely useful in the garden - such as the rose beetle or rhinoceros beetle - others cause considerable damage. Many scarab beetles are nocturnal or only wake up at dusk.

Development of the larvae

The life cycles and the development of the larvae also differ greatly between the individual species. The following table shows the main differences between the garden pests cockchafer and junior beetle:

Another characteristic of many scarab beetle species is the fact that the larvae sometimes remain in the ground for years. Only after two to five years do the grubs pupate, only to hatch as adult beetles in spring. The adult animals, known as imago, do not live too long, however: May and June beetles usually do not get older than four to six weeks and usually only lay eggs once. For this reason, an infestation often only occurs every year - cockchafer, for example, plague gardeners about every four years.

The larvae of the various scarab beetles look very similar to one another. However, you can distinguish them from one another based on the period of their occurrence, the location and the way they move. Turned on their backs, the grubs of the following varieties crawl away as follows:

The larvae of the rhinoceros beetle, on the other hand, are easy to recognize by their size.

What to do if scarab beetles get lost in the apartment?

If a May or June beetle gets lost in the apartment, you can simply catch it and release it outside through a window. The animals will very likely mistake you or your furniture for a tree and land on it quickly. Scarab beetles are neither dangerous nor poisonous to humans.

How long do scarab beetles live?

While the beetle larvae - depending on the species - remain in the ground for up to four years, adult scarab beetles are usually not granted a long life. May and June beetles, for example, fly for four to a maximum of six weeks and then die immediately after they lay eggs.

If you have a May or June beetle on your arm and annoy it, it can bite painfully. However, this only happens very rarely and is completely harmless.

Plant garlic, delphiniums and geraniums (ie the pelargoniums more commonly known as balcony flowers) between your beds and thus prevent white grubs. The animals don't like these plants and try to avoid them.