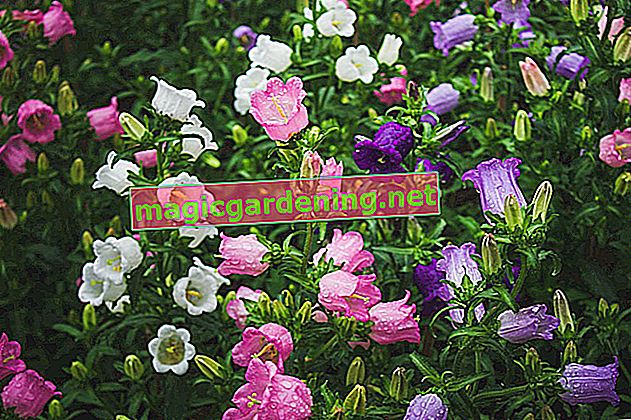 Bellflowers belong to the perennials, which, according to the general definition, are long-lived, herbaceous plants that hibernate with the help of their underground organs and whose leaves and flowers develop from them every year. This means that flower buds are set up again and again in the current season, so that the plant can be made to flower for months. To encourage such constant flowering, you should always prune back anything that has withered.

However, if the faded inflorescences remain on the plant and are pollinated, the plant forms seeds and essentially uses its energy for this. On the one hand, this is at the expense of further flower formation, on the other hand, you can harvest seeds in this way or leave the seed heads and wait for the bellflower to sow itself. If the seed formation is hindered by the continuous removal of the withered parts, the plant will produce new flowers over a longer period of time.

You should also clean the campanula, as the bellflower is also known in gardening, regularly. That means you carefully remove not only the withered flowers, but also

It doesn't hurt if you cut the bellflower back to just above the ground. It will simply sprout again and bloom all the more magnificently.

Cut only for perennial bluebells

But before you reach for the scissors, you better take a closer look at the label of the variety. Most bluebells are perennial shrubs that can be cut back a lot, but other species are only one to two years old and would not survive such a procedure well.

For a radical pruning, you can use scissors between March and around July / early August, as the bellflower often sprouts and blooms a second time in the same year. Otherwise, withered flowers can be cut off and cleaned out during the entire growing season.