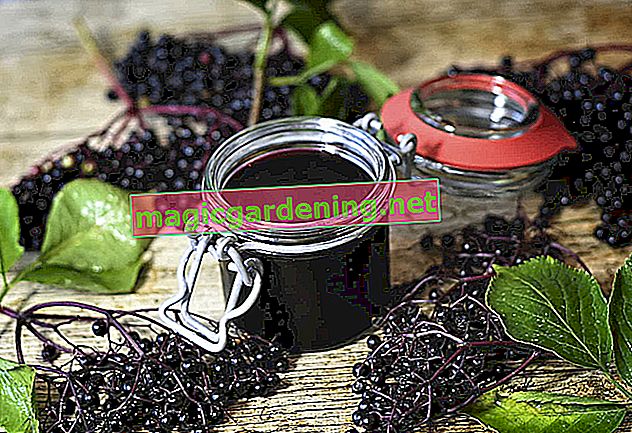 The glycoside sambunigrin is contained in all parts of the elderberry plant. Similar to the poison of the deadly nightshade, it releases hydrogen cyanide. Those who eat elderberries raw often suffer from stomach ache, nausea and vomiting.

It is a well-known fact that boiled elderberries make a delicious jam or refreshing syrup. On the way there, the toxicity is lost. As has been found in tests, Sambunigrin decomposes from a temperature of exactly 76.3 degrees Celsius. This is how you should treat the fruit to be on the safe side:

Freezing does not eliminate the toxicity of elderberries. There is nothing wrong with keeping the harvest in the freezer for some time. However, before consumption it should be heated according to the procedure described.

Raw red elderberries are poisonous as long as they still contain their pips. Even the longest cooking doesn't change that. If you would like to integrate the red fruits into your menu, you cannot avoid the laborious pitting.

As a relic from ancient times, the old German name 'Fliederbeere' for elderberries has been used to this day. Contrary to popular belief, from a botanical point of view an elderberry and a lilac have nothing in common.