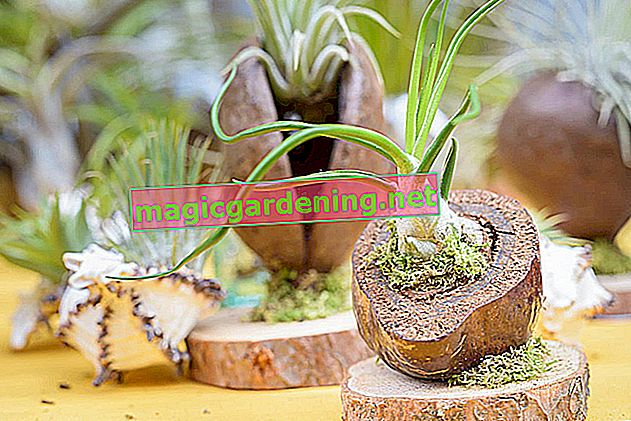 Tillandsia (Tillandsia) are a species-rich genus with around 500 different members in the family of the bromeliads (Bromeliaceae), which in turn belong to the pineapple family. The mostly epiphytic growing plants are native to the entire South American continent. They have adapted to the most varied of habitats in the tropics and subtropics and can be found in the rainforest as well as in the high steppes (even at heights above 4,000 meters!) Or even in the driest region on earth, the Atacama desert on the Chilean seashore Find.

With growing popularity, tillandsia are used as ornamental plants for the home or in terrariums. Here they are either kept alone, with other plants and / or together with animals. The advantage of a terrarium is that the living conditions here can be artificially perfectly adapted to the needs of the residents. It is otherwise difficult to regulate light, humidity and the like within an apartment. It is simply too dry for many Tillandsia species, especially in winter, as the warm air from the heating dries out the environment. Regular - and of course necessary! - Ventilation, on the other hand, brings coldness, which has killed many a tillandsia within a short time.

However, if you want to cultivate the unusual plants in your home, you should definitely use cultivated plants and carefully check their origin: Due to the increasing demand in recent years, countless specimens have been removed from the wild despite legal prohibitions in the countries of origin, so that many stocks are now endangered or have even disappeared.

Most Tillandsia species grow epiphytically, i.e. on trees and other plants (for example cacti) as well as inanimate surfaces such as rocks. They only form adherent, but not fine roots. For this reason, the absorption of water and nutrients takes place exclusively through precipitation and from the air, at least with the so-called gray or white tillandsia. These species have silvery suction scales on their leaves, with the help of which they filter moisture and food out of the air. Other species, on the other hand, reshape their leaves in such a way that these form collection funnels and catch incoming water. A few tillandsia - the so-called green tillandsia - have roots in the earth.

There are also big differences between the species in terms of size and growth habit. The offer ranges from tiny, lichen-like growing Tillandsia to large specimens with impressive leaf rosettes.

Depending on the species, tillandsias bloom between February and October, although it can take a few years for the first bloom. The plants only bloom when they have reached a certain age and size. Incidentally, the eye-catching, long-lasting blaze of color is only about the bracts. The actual, rather inconspicuous flower forms directly on these. Shapes and colors of the bracts vary greatly, mostly intense, bright colors such as red, violet, pink up to magenta or orange predominate. In contrast, the shape in many cases is reminiscent of a torch or flame, with the colored bracts protruding far beyond the actual leaves.

Incidentally, Tillandsias like Sempervivum (houseleeks) only bloom once in their life, after which the plant dies. Before that, however, they train Kindel, through which the different species multiply and develop real cushions over time. However, this does not apply to all tillandsia: Some hardly develop offshoots and instead reproduce almost exclusively via seeds.

The narrow leaves of the tillandsia form a rosette in many species, rarely they are branched and / or arranged in a spiral. The majority of these are herbaceous plants with mostly compressed stem axes. The few species without a compressed stem axis, however, develop longer stems with alternate leaves.

When fertilization has taken place, Tillandsia form capsule fruits which, like dandelions, are provided with “parachutes” for further spreading. However, in living room or terrarium culture, the plants rarely produce seeds because there are no pollinating insects.

Tillandsias are all considered non-toxic, which applies to both humans and animals. For this reason, they are often used in terrariums for bearded dragons and other exotic pets. Caution is advised with some species, however, because the leaves can be pointed and sharp, so that injuries cannot be ruled out if handled carelessly.

The plants are not edible.

In principle, tillandsias need a location that is as bright as possible, but in many cases not directly in full sun. The plants are often best kept right next to a window. However, the optimal space depends largely on the needs of the individual species.

Gray tillandsia are as bright and sunny as possible. As they are used to cooler nighttime temperatures from their natural environment, some species can spend the summer months outdoors. A partially shaded and airy place is ideal for this, for example in the canopy of the house tree, on a trellis or on a wall. Green Tillandsias, on the other hand, prefer bright, warm and very humid locations, although they do not have to stand directly at a window. But be careful: With these species, the temperature should never drop below 15 ° C, whereas gray tillandsia are kept at 10 to a maximum of 15 ° C in winter.

Epiphytically growing tillandsia are not cultivated in a substrate. Instead, attach them to an object attached to which the plants will root over time. These can be pieces of wood or bark, natural or artificial stones (low in lime!), Shells or just a simple wire.

Since the plants need some time to root, they are first glued or tied. For this you can use, for example, commercially available silicone glue from the hardware store or simple superglue. Make sure that the glue used is free of acetone. In this case, you should only leave the hot glue gun in the closet, because the resulting heat will damage the plant. Instead of sticking, Tillandsias can also be tied together with thin strips of normal, elastic nylon tights. Use skin-colored stockings for this, as these are almost invisible. As soon as the plant or the plant arrangement is firmly rooted, the tights can be removed.

Tillandsias with roots on the other hand are best planted in orchid soil or in a mixture of bark, peat moss and coarse sand that you have prepared yourself.

Since epiphytically growing tillandsia mainly absorbs the water through the leaves, you do not need to water these specimens, which are cultivated without substratum anyway. Instead, spray the plants several times a week with low-lime, ie soft, water. If possible, use rainwater or very well stale or boiled and cooled tap water. Mineral water with little carbon dioxide and a low lime content is also suitable. Alternatively, during the summer months, the plants can be immersed in a bath with lime-free water once a week, but you have to be careful: if the leaves of the gray tillandsia come into contact with water, they turn green.

Since green tillandsias need high humidity, you should spray these species daily. If, on the other hand, it is an earth culture - regardless of the type - the substrate must not dry out. Water the plant with room temperature and low-lime water as soon as the soil is noticeably dry.

Caution is advised with desert tillandsia such as Tillandsia capitata. These usually do not need that much water, but are content with about one or two doses per month. However, no general statements can be made here, since plants, like all living things, are very individual. If you observe your plants carefully, you can more easily estimate the actual water requirements.

In the epiphytic species, nutrients are also absorbed through the leaves. Use a special bromeliad fertilizer that you add to the spray or irrigation water and simply spray onto the plant. The whole plant should always be misted so that all plant parts are evenly supplied. Since tillandsia have only a low nutritional requirement, fertilization is sufficient between April and September about every two weeks and between October and March only every four to six weeks.

Tillandsia must (and shouldn't!) Be cut. Dead or withered parts of the plant can be easily plucked off after a while.

Propagation takes place quite simply via offshoots that the plant itself forms and which are called “Kindel”. If possible, do not cut these from the mother plant, but separate them by carefully plucking or breaking them. Then plant or fix them straight away on a new substrate or set them in a sandy substrate. After the Kindel are trained, the mother plant usually dies.

Only the species Tillandsia usneoides does not develop any kindles. To propagate these, cut off healthy shoots about four to six inches long with a sharp and clean knife. Then tie them on cork or wood and spray them with water every day.

Propagation by seeds, on the other hand, is much more difficult, especially since at least two specimens of the same species must flower at the same time for successful fertilization. Since tillandsias rarely bloom, you would likely have to wait many years to collect seeds yourself. Especially since the subsequent fruit ripening and germination each take several months.

If you keep the tillandsia in the apartment all year round, you basically do not have to take any special care measures during the winter months. Only the water requirement can increase, as the heating air greatly reduces the humidity. In addition, the fertilization intervals are extended to four to six weeks.

Tillandsia that have been covered in summer on the balcony are cleared in September at the latest - earlier if the weather is cooler - and wintered in a bright and well-ventilated place. However, temperatures should not drop below 15 ° C. In this case, there is no fertilization, only regular spraying makes sense.

Many Tillandsia species need a high level of humidity, but you shouldn't overdo it: moisture inevitably leads to rot and then the plant can no longer be saved.

Aphid infestation rarely occurs, but the animals can be easily removed by washing the leaves.

Tillandsias don't bloom, what can I do?

If your tillandsia is not in flower, it is likely that it simply has not yet reached “flowering maturity”. It can sometimes take many years for these interesting plants to develop their often bizarre flowers. In forums it is sometimes advised to stimulate the plants to flower with the help of an apple. Ripe apples give off ethylene, which is a gas that promotes ripening. However, this method only works if the tillandsia in question is ready for it.

Tillandsias held in glass balls look particularly pretty. This type of culture also offers the unbeatable advantage that it can be used to create optimal growth conditions.

In addition to the types listed here, there are numerous others in specialist shops, some of which are only recommended for specialists. Some bromeliad species require very special living conditions that can only be created with a lot of effort and precise knowledge of these plants. If you should stumble across the botanical name “Catopsis” while looking for suitable tillandsia, it is often a species with special needs. Like Tillandsia, Catopsis are bromeliads, but have significantly smaller flowers and other differences (for example in the structure of the sepals). However, the species are closely related and sometimes the two names are used synonymously in plant shops.