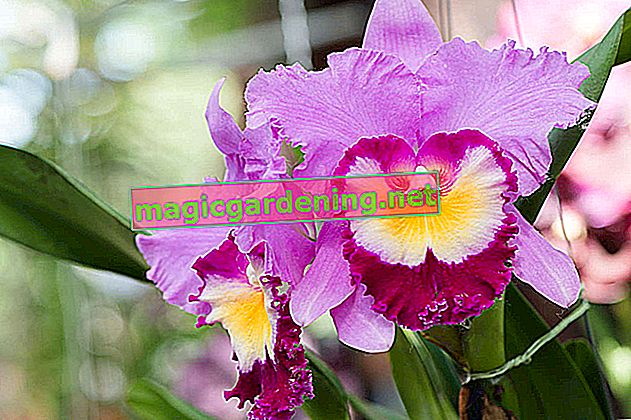 The Cattleya orchids have their home in the tropical rainforests of South America, where they grow either epiphytically (ie living on trees) or lithophytically (ie on rocks). The genus was the first of the large family of exotic orchids (Orchidaceae) that came to Europe in the 19th century. Here they soon enjoyed great popularity, so that in aristocratic circles it was considered chic to wear a Cattleya flower in your buttonhole. The genus is named after William Cattley, an English orchid collector. In 1818 he was the first to succeed in cultivating the beautiful exotic woman in Europe.

The growth form of the Cattleya orchids is characteristic of many orchid species that occur as epiphytes in nature and thus manage almost entirely without soil. The basis is a creeping rhizome, from which thickened shoots often develop during the growing season. This thickening, known as a pseudobulbus, serves the plant as a reservoir for water and nutrients. Also typical of the genus is the sympodial growth form, in which new shoots always arise at the base of the old, fully grown ones. Cattleya orchids reach an average height of around 25 centimeters.

The one or two fleshy, leathery leaves sit at the upper end of the thickened stem axis, the pseudobulb. How many leaves there are on the Cattleya depends on the species. Botanists differentiate between single-leaved (unifoliate) and two-leaved (bifoliate) Cattleya orchids. The leaves are typically broad, elliptical to lanceolate in shape.

The very large flowers of the Cattleya orchid usually appear either in spring or in autumn. They last several weeks to months before they bloom, but because of their size and therefore their weight, they have to be tied up. Otherwise the flower shoots could snap off or even break off. While the large-flowered species usually do not develop more than four flowers per stem, the small-flowered varieties and hybrids have up to 14 or, as with the Cattleya guatemalense, even up to 20. Cattleya orchids are primarily through their wide range of colors is popular, ranging from red and pink to brown, yellow and orange to white in different tones. Many varieties are also multicolored or spotted. In addition, some variants inspire with their intense, sweet-spicy fragrance,for example the popular Cattleya intermedia.

The Cattleya orchid is considered non-toxic, and there are no known indications of possible intolerances.

The exotic cattleya orchid is definitely not a houseplant for beginners. The sensitive flowers should be kept constant at 20 ° C and a high humidity of at least 50 percent, ideally 80 percent. Regarding the light intensity, all Cattleya species need a very bright location, which after a short period of acclimatization can even be in full sun. The flowering is particularly beautiful if the plant is allowed to stand in a south-facing window from September to May - only here does it get enough light in the dark season. If it is too dark for the Cattleya - which is true for the whole year - it only forms empty leaf sheaths, so that flowering does not occur.

In nature, as epiphytes, Cattleya orchids have little or no contact with soil. For this reason, commercially available, possibly pre-fertilized potting soil is completely unsuitable for the culture of the sensitive plants. Instead, the orchids feel most comfortable in coarse pine or pine bark, which you can use with a little sphagnum (if possible, only use the disinfected material from specialist retailers and not one collected in the forest itself!), Perlite (€ 32.90 at Amazon *) and a mix some horn shavings (€ 6.39 at Amazon *) / horn meal.

Alternatively, you can purchase a special orchid substrate (€ 7.98 at Amazon *) from the specialist garden center, with some orchid retailers offering Cattleya soil specially mixed for the needs of Cattleya orchids.

Transplant the Cattleya orchid into a larger pot about every two to three years, using a special, transparent orchid pot at best. Although these are quite expensive with a purchase price of at least ten euros, they perfectly accommodate the special needs of epiphytes. They ensure that the long roots get enough light and air, can stretch out to the sides and at the same time make waterlogging - the number 1 cause of death in orchids - impossible.

And this is how it is planted:

The Cattleya then needs to recover from this stress and may look a little "offended" for the next two weeks. If possible, leave them alone and just spray them with a little water from time to time.

The ideal date for repotting depends on the flowering time of the plant: autumn-flowering Cattleya receive fresh substrate and a new pot in spring, while spring-flowering plants are given in autumn.

During their flowering period, Cattleya orchids need a lot of water and also dry out quickly. Watering twice a week makes sense at this point, each time you should water so abundantly that the water flows out of the drain holes on the bottom of the pot. The substrate should feel almost dry between the individual waterings, but not dry out completely. Experienced orchid gardeners use the cradle method to determine the optimal watering time: The pot and the plant are watered immediately after watering, because it is then the heaviest. After about three to four days, it is weighed again, then the pot should weigh significantly less. If this is not the case, there is no need to pour. Incidentally, this also applies if the substrate feels quite dry to the touch.

Outside of the flowering period, however, the Cattleya needs much less water. Now she can survive two to three weeks without any watering. Some orchid owners even do not water their Cattleya at all over the winter months.

As epiphytes, Cattleya orchids are used to a nutrient-poor environment. Like all orchids, they are particularly sensitive to salt. On the other hand, the development of the large flowers costs the plant a lot of energy, which has to be added again through fertilization. If possible, use a liquid orchid fertilizer that you only use half as much as recommended by the manufacturer. You administer this every two weeks together with the irrigation water.

Apart from the complete removal of faded flower stems, no pruning measures are necessary for Cattleya orchids.

You can reproduce large specimens of the Cattleya orchids simply by dividing the rhizome. This is best done together with repotting the plant, which is due anyway. Use a sharp and disinfected knife or scissors to separate the rhizome into several pieces, each of which should have at least three bulbs. Then plant the pieces separately in new pots.

When the flowers of the Cattleya orchid wither, the leaves often begin to wither too. As a rule, this is not a sign of an illness, but a completely normal process: In this way, the flower indicates that it is now entering the resting phase. This does not necessarily take place during the winter months, but depends on the flowering time of the Cattleya. Remove fallen and wilted leaves and flowers so that no pathogens or pests nest there. Also, place the plant cooler than usual at around 15 ° C for a few weeks, water it less and stop fertilizing. As soon as the first new shoot appears, the Cattleya orchid ends its rest period on its own. Now care for them again as usual.

Incorrect care and unsuitable site conditions make Cattleya orchids susceptible to various diseases or pests. The beautiful houseplants die particularly often because they are literally watered to death. Therefore, be careful not to pour too much and not allow waterlogging to develop in the first place.

The so-called black rot, which primarily affects the young orchid shoots, is also problematic. Within a very short time, they turn black and rotten. Sometimes you can still save the plant by cutting away the diseased areas generously - right into the healthy tissue - and dusting the interfaces with charcoal powder.

If the Cattleya is in an unfavorable location, uninvited pests such as thrips, spider mites (“red spider”) or scale insects often appear.

During the summer months, place the Cattleya in a light, but not directly shaded, spot outside.

Cattleya orchids come in many shapes and colors, with various hybrids being sold in addition to the numerous species. We present some of the most beautiful varieties here: