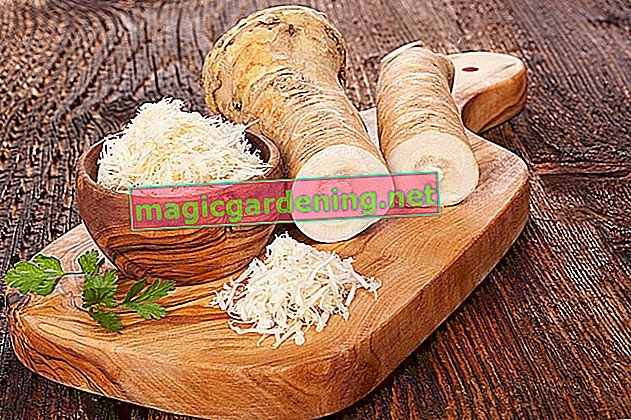 Use only mature seeds

In contrast to plants, you can grow lavender seeds on the windowsill or in the greenhouse from February / March. However, the seeds should only be spread outdoors when frosts are no longer to be expected. This applies in particular to the sensitive potted lavender, which shouldn't be grown outdoors anyway. In the shops you can usually only get seeds of the so-called “wild lavender”, which means real lavender. This seed-strong variety is easiest to propagate via seeds, but the method doesn't work so well with all others. Lavandin - the Provencal lavender - is even sterile and can only be propagated using cuttings. If, on the other hand, you want to use lavender seeds from your own garden, you should first let them mature properly.The seeds are formed immediately after the plant has flowered, which is why you simply leave the faded stems on the plant.

If possible, stratify seeds in the refrigerator

Lavender seeds germinate best if you first stratify them, that is, subject them to a prolonged cold spell. However, this measure is not absolutely necessary, as you can sow the fine grains this way. However, stratification increases the likelihood of success. And this is how you proceed:

Then fill the pots with potting soil and simply pack the sand with the seeds on top. Covering with cling film should not be done, as lavender does not tolerate high humidity particularly well.

Lavender is a light source

Gardeners generally differentiate between dark and light germs, with light germinating varieties best placed in a light location and, if possible, not covered with soil. Instead, it is sufficient to press the fine seeds lightly against the previously moistened soil, for example with a board. Keep the seeds evenly moist, which works great with a spray bottle. Light germs usually have very fine seeds that are quickly washed away when watering. Make sure that the lavender likes it drier as soon as it shows the first leaves.

Lavender plants grown from seeds are seldom pure, that is, they differ considerably in the color and shape of their leaves, in the shape and height of their growth and sometimes in the color of their flowers. If you want plants that look the same, it is better to resort to cuttings. Planting the seeds is done in this way:

You can prick out the seedlings and plant them at least five centimeters apart as soon as the first leaflets appear after the cotyledons. Shorten the roots a little with clean nail scissors, then they will branch better.