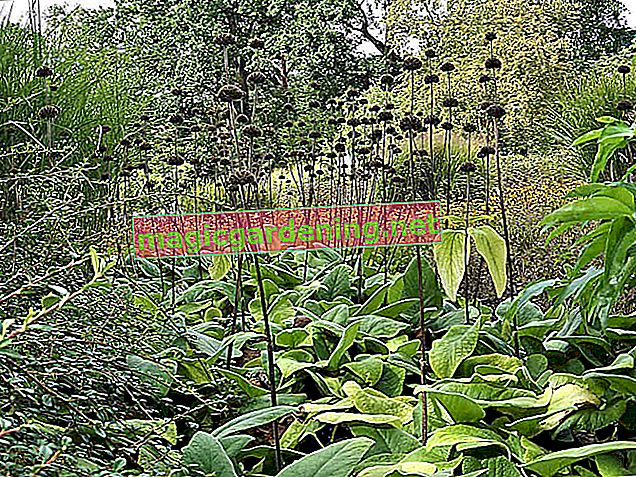 The Syrian fire herb (bot. Phlomis russeliana), which is popular in many gardens, also called gold whisk or named after its discoverer, the Scottish naturalist Dr. Alexander Russell, known as Russels fire herb, is one of at least 100 different species of fire herbs. The species-rich genus, which belongs to the mint family (Lamiaceae), includes both perennials and subshrubs. The homeland of most of the species stretches from southeast Europe across the entire Central Asian continent to China. The Syrian fire herb originally comes from the mountainous forest regions of northern Anatolia.

Here it can be found wild in both coniferous and deciduous forests as well as on bare areas, preferably in association with hazelnut bushes. The sun-loving perennial grows particularly well on the edges of trees, on open spaces and prefers dry or rocky surfaces.

Flaming herbs can be incorporated into many garden environments and cut a fine figure on the edges of trees, on embankments, in rock gardens as well as in prairie beds. A dry subsoil and root competition do not affect the robust plant, which is why it can be used in a variety of ways. Due to its distinctive growth and the height of between - depending on the selected species and variety - 90 and 150 centimeters, it is best to plant the sturdy perennials in the middle of the bed, where they go well with perennials such as the mullein (bot. Verbascum), the blue rute (Perovskia) , Cranesbill (Geranium), steppe sage (Salvia nemorosa), germander (Teucrium), lavender (Lavandula) or various ornamental grasses. The bright golden yellow blooming Syrian fire herb harmonizes particularly well with blue or purple blooming species.

The clumpy growing shrub is very vigorous and conquers larger garden areas within a short time, which is why it is well suited as a ground cover or gap filler, for example on embankments. Numerous runners grow from the underground rhizomes, which should be kept in check with root barriers or the like. The plant has dense foliage, especially in the lower area up to a height of about 30 centimeters, whereby the tomentose, hairy, heart-shaped leaves stick to the stem through winter and dry up until spring. The perennial sprouts from the rhizome anew every year and can therefore easily be overwintered.

The strong golden yellow flowers of the Syrian fire herb open between June and July, whereby the typical lip flowers stand together on several floors in decorative pseudo whorls and sometimes even branch out. The flower stalks can reach a height of up to 90 centimeters. Like all fire herbs, the Syrian fire herb is a popular bee pasture.

The triangular nuts that develop after blooming are egg-shaped, slightly hairy on the surface and contain numerous seeds. In order to prevent uncontrolled seeding of the plants, you should remove dead stems - the Syrian fire herb reproduces very successfully not only via root runners, but also very successfully via self-sowing.

The Syrian fire herb is neither poisonous for humans nor for animals.

It is best to plant the Syrian fire herb in full sun, as this is where it flowers most beautifully. However, the perennial also feels comfortable in a light, partially shaded place, as long as the soil is well-drained, rather dry and rich in nutrients. A loose subsoil is also the best guarantee that the extensive growing roots will find sufficient space.

In principle, phlomis can be planted during the entire vegetation period, provided that the weather allows it and there is a (more) threat of frost. However, we recommend planting in spring, if possible only from mid to late May, because the plants often need some time before they are finally grown. For this reason, flowering is often only expected after one to two years of standing, but the long-lived perennial shows its lush splendor all the more joyfully over the next few decades. You should expect about four to six plants per square meter, which are planted about 50 centimeters apart. Enrich the soil with ripe compost and water the perennials well after planting.

The species-typical growth can be limited with the help of root barriers. But also a natural limitation by competitive plant species such as ornamental grasses or cranesbills fulfills this purpose.

Additional watering is only necessary during the hot summer months, otherwise the pretty, felty leaves quickly become unsightly. Always water from below, never from above and, above all, not too abundantly - the Syrian fire herb, used to drought, is quite frugal and cannot cope with excessively moist soil and, above all, waterlogging. Occasional drying times can therefore be overcome without any problems.

When it comes to fertilization, the frugal flowering miracle doesn't do you much work either: if you provide it with some ripe compost in the spring after cutting, it will have sufficient nutrients for its lush growth.

Since the gray-green leaves stay on the stem well into autumn and often even into the winter months and thus form a decorative element in the autumn garden, you do not have to prune the plants until spring. Cap the above-ground, now dried-up plant parts just above the ground and then apply ripe compost. The perennial usually sprouts again very quickly afterwards.

You do not need to worry about the propagation of the fire herb: the very vigorous perennial does this so reliably itself that you should take more restrictive measures instead. If a carpet-like spread in the garden is desired, simply let the bees-pollinated inflorescences mature. The weed will then sow itself. Alternatively, simply collect the nut fruits and sow fine seeds directly in the desired new location. It is not necessary to pull it forward on the windowsill or the like.

The Syrian fire herb can also be multiplied very well by dividing it, whereby you should carry out this measure for the first time after about ten to 15 years. Freshly planted fire herbs take two to three years to establish in the new location, which is why you shouldn't move them again so quickly once they have been planted. Only if the perennial feels comfortable in the new location and therefore spreads too quickly, you can simply separate particularly cheeky root runners from the mother plant with a spade and plant them again in a new location. When dividing older plants, it is best to proceed as follows:

Since the Syrian fire herb can be overwintered in the garden without any problems, special measures for winter protection are not necessary. However, you should let the above-ground parts of the plant stand during the cold season and only prune back in spring, as this is used for winter protection. In very wet winters, you should also protect the rhizomes from moisture, as otherwise mold can spread. This can be done by spreading fir or spruce twigs on the ground - the twigs keep the soil dry, but should be removed in the spring in good time before budding.

Burning herbs are also pleasantly uncomplicated with regard to diseases and pests. The only problem is too much moisture, which promotes the colonization of fungi. That is why downy mildew often spreads in wet summers, which you can easily recognize by yellowish to brownish spots on the upper side of the leaves and a gray-white fungal lawn on the underside. Cut away infested leaves and spray the diseased plants with a field horsetail broth that you have prepared yourself. The leaves should then be able to dry off quickly, and the location must also be kept dry.

Typical garden pests such as the otherwise voracious snails, however, usually leave the smut herb alone.

The sturdy flower stalks of the fire herb are great for cutting as cut flowers for the vase. They are also easy to dry and are therefore often used for dry bouquets.

In addition to the Syrian fire herb, the following three species can be found in many gardens. All species bloom between June and July, with their distinctive whorls of flowers being yellow, pink or red. With regard to their needs in terms of location, soil and care, the individual species are very similar.

The pink-blooming bulbous cinderella needs a full sun, warm location and gets along very well with other sun-loving perennials such as purple sage (Salvia officinalis 'Purpurascens') or lavender (Lavandula). As the name suggests, the corrosive herb spreads through root systems that grow underground. However, it grows rather slowly and clumps. For example, the varieties 'Bronze Flamingo' or 'Amazone' are recommended.

The Samos fire herb, also known as Greek fire herb, has a pretty brownish to pinkish violet flower and forms dense rosettes of leaves, which is why this species is often used as a ground cover. The species becomes about 90 centimeters high like the Syrian fire herb.

This bright yellow blooming species from the Mediterranean region grows shrubby and reaches heights of up to 100 centimeters. Since the evergreen species is not frost hardy, it often freezes back a lot in cold winters. However, it drives reliably out of the rhizome again in spring, so that overwintering is usually unproblematic. Phlomis fructicosa is suitable for creating Mediterranean or steppe gardens.