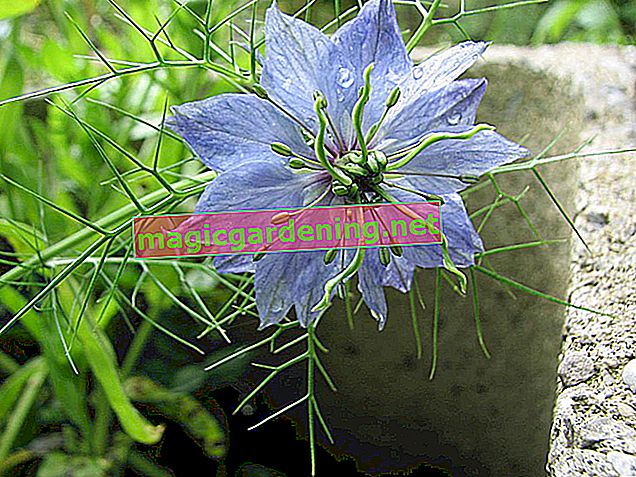 The ideal location for the maid in the country

The undemanding maiden in the country thrives on almost all garden soils, provided that it is as sunny as possible. The sunnier and drier the location, the more beautiful and lush the flowering will ultimately be. A humus, moderately nutrient-rich and rather dry soil is ideal, and the plant also prefers warm summers. In rather humid and cool early summer, it can happen that the buds wither and the maiden in the green does not bloom.

Sow maiden in the country directly in the open air

The sowing of the maiden in the country is basically very simple:

In addition, sowing is possible as early as September, with these specimens blooming particularly early. You can ensure a longer flowering period by re-sowing in spring. If self-sowing is not desired, the seed pods must be removed in good time.

Jungfer in the country doesn't need much maintenance

Otherwise, the maiden in the country does not need any further care, except for additional watering in the case of longer periods of drought. Fertilization or pruning is usually not necessary either. The first flowers appear eight to ten weeks after sowing.

The dried seed heads of the maiden in the green are wonderfully suitable for dry bouquets, for example in combination with wildflowers and grasses.