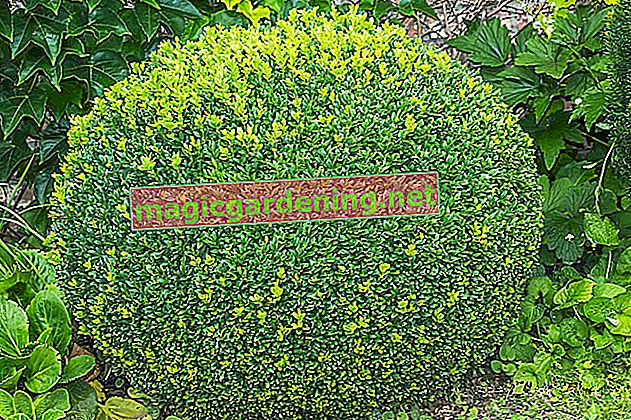 When it comes to disease, problems caused by various fungi dominate, many of which have only been on the rise for a few years and threaten valuable stocks. Combating them is often difficult.

Probably the most feared disease of the boxwood is the boxwood shoot death caused by the fungus Cylindrocladium buxicola, which initially manifests itself in rapidly growing, dark brown spots on the leaves. At the same time, white spore beds are formed on the underside of the leaves, which are a clear identification mark next to the black stripes on the shoots. Later on, leaves fall off, shoots and entire parts of the plant die off. Prevent the disease by taking the following measures:

The varieties 'Suffruticosa' and 'Blauer Heinz' are particularly susceptible to this disease, instead you can plant less sensitive varieties of the small-leaved boxwood (Buxus microphylla), such as the popular variety 'Faulkner'.

Incorrect pruning or the use of contaminated gardening tools and cutting tools spread the fungal pathogen Volutella buxi, which causes so-called boxwood cancer. You acknowledge an infection

In the event of illness, you should cut the affected plant deep into the healthy wood and dispose of the infectious clippings with the household waste.

In contrast to other fungal diseases, boxwood wilt caused by the fungus Fusarium buxicola is mostly limited to individual parts of the plant. These initially show a yellow discoloration and then die off. Typically, dark, soft areas can also be seen on the bark. Usually it is sufficient to cut out the affected areas.

The rather seldom occurring boxwood rust mainly affects older populations of the common boxwood (Buxus sempervirens). An infection initially remains inconspicuous for a long time because the causative fungus Puccinia buxi is initially restricted to the inside of the plant. The leaf tissue initially only shows thickening, the rust-red, conspicuous spore beds, on the other hand, only appear months later. They mainly appear in autumn. Infested parts of the plant are highly infectious and should be removed and disposed of immediately.

Lice sucking leaf sap, mites and fleas are common on the boxwood. To prevent an infestation, you should ensure optimal location and growth conditions. Pests primarily colonize weakened specimens. Many of the animals listed here overwinter directly on the plant, mostly in egg or larval form. Effective control therefore includes pruning infested box trees before the larvae hatch in spring. This should be done by mid-May at the latest.

The box tree moth, which was introduced from East Asia, has only been active for a few years, but is a massive threat to the box tree. The larvae of the small butterfly, which only lives for a few days, are particularly damaging to the plants and eat the plants bald within a short time. Since the green caterpillars live inside the bush, an infestation is often only noticed very late. It is difficult to control, as numerous generations hatch each year and plants are infested again and again even after successful treatment. The following measures in particular have proven effective:

If the young leaves roll up like a shell at the shoot tips - the so-called "spoon-leaf" - this is a typical feature of an infestation by the common boxwood leaf flea. In summer, the adults lay their eggs in the leaves of the boxwood, where they overwinter and the larvae hatch in the following spring. In the event of an infestation, the infected parts of the plant should be cut off in late summer or autumn.

The boxwood spider mite, which has also only appeared for a few years, only appears in dry and hot summers. It can be fought well with predatory mites and with preparations based on neem or rapeseed oil. Clearly recognizable, yellowish galls in the leaves, on the other hand, are a sign of an infestation with the gall mite (Monarthropalpus buxi), which should be pruned vigorously in spring.

In order to save yourself the hassle of diseases and pests, you can also choose similar plants such as barberry or privet instead of the boxwood.