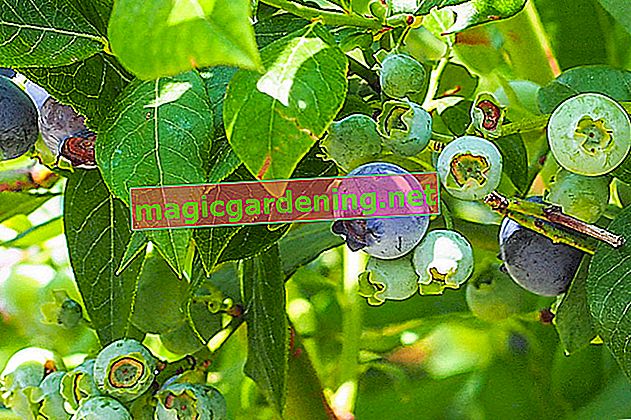 Despite all prophecies of doom, you can very well cut your bamboo. Before you reach for the scissors, you should familiarize yourself with the special growth behavior . Although the plant lignifies over time, its growth differs markedly from trees and bushes. The following botanical aspects influence the pruning of bamboo:

It is primarily the latter point that you should take to heart when cutting bamboo. Trees and bushes grow a little longer at the tips each year, in accordance with the law of top funding. A bamboo stalk sprouts in spring and has reached its final height by autumn. In the following years, growth is limited to leafy side shoots, depending on the species and variety. In this way, strong-growing bamboo species reach majestic heights of six to eight meters within eight to ten years - but this growth always takes place within a single season.

By nature, bamboo is easy to cut . You can cut off isolated, annoying stalks throughout the season without hesitation. If, on the other hand, you have prescribed a comprehensive cut for the opulent ornamental grass, spring will come into focus. In view of the winter hardiness of fresh stalks, the main frost period should end when you cut bamboo. Just before plants begin to grow in your area is the best time to take care of the pruning.

Please don't let yourself be tempted to tackle your bamboo with scissors or a saw in late autumn. According to the laws of growth, each cut causes a more or less strong shoot. So shortly before winter, herbaceous stalks have nothing to withstand severe frost and freeze back. The resulting rot affects all of the bamboo.

Flat tube bamboo (Phyllostachys) inspires with green, yellow, reddish-brown or black stalks that bring color to the garden. It is the three to four year old stems, the color of which shines in all its splendor. Older stalks pay tribute to impermanence by fading their colors and weathering the leaves. After eight to ten years, a bamboo stalk has passed its zenith and gradually dies. At the same time, young stalks sprout each season so that a continuous regeneration process takes place. With a well-planned pattern care you have a supportive effect on the development. How to do it right:

You can master a solidly lignified bamboo stalk with sturdy two-hand pruning shears, which ideally have a power-amplifying ratchet gear. Alternatively, you can use a handy folding saw (€ 17.70 at Amazon *) with Japanese perforation. Regular lighting ensures that your bamboo flourishes flooded with light, so that young stalks can color better and produce numerous leafy side shoots. When purchasing runners-forming bamboo varieties, a stable root barrier should be in the shopping cart. The optimal length of a rhizome barrier depends primarily on the height to be expected. As a rough rule of thumb, use half of the expected height as a basis for the length of the root barrier. Dig a 65 to 70 centimeter deep trench to lay the rot-proof geotextile (€ 84.99 on Amazon *). Both ends should overlap by 10 centimeters and are connected with an aluminum rail. It is important to note that the rhizome barrier protrudes a few centimeters. Otherwise, bamboo roots could cross the barrier.

Umbrella bamboo (Fargesia) gives rise to a cut with its dense clumps. If winter has plenty of snow in the luggage, the clumps tend to fall apart in spring. Snow pressure has weakened the bamboo so much that a heavy downpour is enough for several stalks to lean and protrude unsightly from the form. The troublemakers can then no longer be incorporated. The reason for this is the comparatively small stalk diameter, which no longer supports the high leaf volume. How to fix the problem as part of the cut care:

As a result of the reduced weight, shortened stalks straighten up by themselves. Although the stalks can no longer make up the lost height, they at least contribute to a dense, gapless bamboo clump with numerous leafy side shoots.

Lignified bamboo stalks are perfect for supporting freshly planted trees or perennials that are at risk of wind throws. Short pieces of stalk are useful as a marker for planting areas in the ornamental and kitchen garden.

When cutting a bamboo hedge, you should always consider the special growth. In contrast to a hedge made of bushes, bamboo stalks do not grow back up after a cut. So do not cut the stems shorter than you would like the height of the hedge to be. With a clever step cut you optimize the privacy factor. How to complete the correct cut of a bamboo hedge:

Over the years, you primarily subject the new stalks to a shape cut so that they integrate harmoniously into the hedge profile. If umbrella bamboo forms into a hedge, damage can occur as a result of snow pressure, as with solitary clumps. Shorten the affected stalks with branch or hedge shears so that they no longer protrude from the shape of the hedge.

In order for a bamboo hedge to reliably ward off prying eyes, thick side foliage is essential. By shortening a stalk, you create a jam beneath the cut. Eyes that have been resting up to now will perk up and drive out diligently. When trimming your bamboo hedge in steps, shorten the outer stalks a little more than the stalks inside the hedge. As a result, numerous leaves also sprout in the lower area for perfect privacy protection down to the ground.

In the creative design of Asian gardens, dwarf bamboo (Pleiobastus pymaeus) is very popular as an evergreen ground cover. As long as its invasive character is kept in check with the help of root barriers, the small type of bamboo proves to be easy to care for.

Dwarf bamboo is no more immune to the natural aging process than its big brothers. When the stalks die off and the leaves fade, pep up the growth with a clearing cut. You can either cut out overaged areas or perform a complete cut back close to the ground. Thanks to its vital vigor, you can rely on a strong, fresh shoot.

Topiary on bamboo - is that possible?

Good-natured pruning tolerance and impressive vigor qualify numerous types and varieties of bamboo for topiary cutting. Creative home gardeners are happy to give their umbrella bamboo a spherical shape. A wavy hedge topiary can be achieved with a wide variety of Fargesia varieties. For this purpose, you should let the scissors circle several times per season. First, give your bamboo a year or two to establish itself on the site.

Make the first cut in the spring before the new leaves sprout. Only when your bamboo is completely leafed do the second cut. After another four to six weeks, you will complete this year's topiary. In the following year, it is sufficient to dedicate yourself to the new shoot to bring it into the desired silhouette.

Should bamboo be planted with a root barrier?

Not every bamboo sends out its roots to conquer the garden. Different species and varieties thrive as clumps and forego invasive growth with runners. The peaceful bamboo species include, in particular, all Fargesia varieties. If you are planning to plant Phyllostachys bamboo, the use of a rhizome barrier is highly recommended.

Bamboo varieties suitable for the garden and balcony are mostly hardy. Well-rooted specimens in the bed tolerate temperatures down to - 26 degrees Celsius very well. Only shading against solar radiation is advisable to prevent drought stress. An exception applies to bamboo in a bucket. The exposed position of the root ball makes it vulnerable to frosty temperatures. Ideally, you should clear the plants in good time. Alternatively, you can wrap buckets with fleece or bubble wrap and slide a block of wood underneath.

Do I have to cut an umbrella bamboo after planting and tie it together for the winter?

Neither nor. Bamboo is an ornamental grass and not a wood. Pruning to promote branching is not required. In order for umbrella bamboo to survive the cold season safely, we recommend a shading net in the first and second year to protect against drought stress in blazing winter sun.

I want to plant small ornamental grasses under my bamboo hedge. Which varieties are suitable?

Can I cut off the top of bamboo if it grows too tall?

That is possible without any problems. The best time is in spring, shortly before the start of budding. However, you should be clear about the final height, because once shortened stalks no longer grow in height.

Our two umbrella bamboo are light green after a severe winter, shed leaves and roll up the remaining leaves. Are the plants frozen? What can we do?

Shedding and curling of leaves after winter is nothing to worry about. Severe frost causes drought stress on bamboo. The evergreen leaves continue to evaporate water without the roots in the frozen ground being able to provide replenishment. As a result, umbrella bamboo reduces the evaporation area by curling its leaves. Heavy freeze causes the plant to shed some leaves. Just in time for the beginning of spring, fresh stalks sprout from the root ball and the leaves roll up again.

Anyone who shears bamboo over a comb with conventional grasses is subject to one of the most common mistakes when cutting. Other frequent mishaps are based on an unsuitable choice of dates and the complete avoidance of a cut. The following table summarizes the three most common cutting errors together with information about the damage and a skilful prevention:

Sacred bamboo or sky bamboo has no botanical or horticultural connection with real bamboo. In fact, it is an evergreen, unreinforced flowering shrub from the barberry family. Nandina domestica reaches heights of 150 to 200 cm, flowers in early summer and wears red berries in autumn. The name refers to its frequent use in Japanese temple gardens.