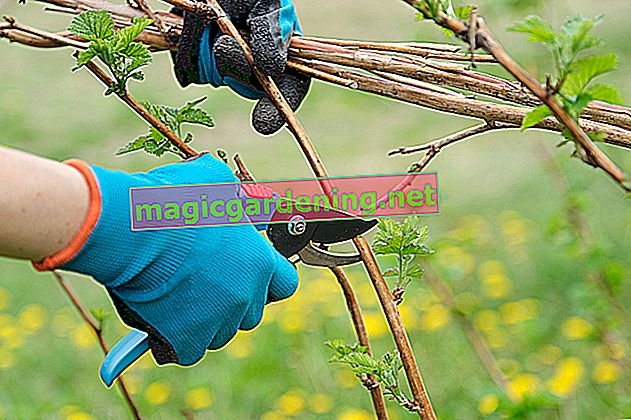 The best time is in summer

With regard to the ideal time for the pruning, the narrow column cherry does not differ from the imposing cherry tree. After the harvest, you have the best overview of the removed fruit wood. Furthermore, it speaks in favor of a summer cut date that cuts close faster. This keeps lurking fungal spores and pests at bay.

A column cherry usually begins its harvest phase in the third year at the latest. This eliminates the need for extensive upbringing in winter, as is mandatory for the large cherry tree. On older specimens, a cut in the lower area is advantageous when the fruit wood begins to age.

Never cut in the rain

Do not cut a column cherry at any time of the year in damp weather. Cut wounds in damp wood are a welcome target for fungal pathogens. This does not only apply to the usual suspects, such as powdery mildew or gray mold. Lethal wound parasites that cause fruit tree cancer are primarily aimed at apples and pears. However, if a susceptible cherry gets in their way, the fungal spores will not miss this opportunity.

In contrast to the traditional cherry tree in the garden, the fruit wood of a column cherry sprouts directly from the trunk . In combination with strong growth at a young age, cherries are more common to be blended than column fruit. As the figure below illustrates, the conservation pruning focuses on long side shoots. How to properly cut a column cherry:

Side shoots that are steeply upwards compete with the trunk and are not suitable for the fruit wood. So that these branches do not consume valuable nutrients, they should be removed. If a steep drive is in a favorable position, spread it at an angle of about 60 ° to the trunk. You can do this with a spreader stick or a clothespin. Do not prune the leading instinct prematurely

The point in time for cutting the tip of the leading drive must be carefully considered. Young column cherries are characterized by powerful growth. As long as the top bud is enthroned on the main branch, the law of top funding rules. The cherry pumps a large part of the reserve substances towards its dominant tip in order to force the growth towards the light. Side shoots receive less nutrients and grow accordingly weaker. Weaker growth always causes fruit trees to produce numerous flowers and fruits. Do not cut the tip bud on the main shoot until growth has calmed down after a few years. The desired final height may first be exceeded. In return, your cherry blossoms and fruity lush.

Cut the old cherry in stages

A characteristic of older column cherries is a different growth in the upper and lower area. In the lower half, the growth weakens visibly over the years and the fruit wood ages. Harvest yield and fruit quality decrease noticeably. There is no trace of such signs of age in the upper half of the column. You can simply accept the shortcoming or compensate for it with strategic pruning. This is how it works:

The two-part choice of date has no influence on the pattern. Shorten excessively long, removed branches to 10 to 15 cm. You thin out competitive shoots and dead wood. The disadvantage of a late winter pruning can be seen in the fact that already established flower buds fall victim to the scissors. A step-by-step pruning makes sense if the column cherry shows clear signs of aging and anyway hardly blooms and fruit in the lower half.

The point in time of cutting influences the growth rate

The later in the year you cut, the more reserve material the root has already released onto the shoots. This dampens the pressure of the juice at the interfaces, which can be seen from a significantly weaker bud. Conversely, a late winter cut activates vigorous growth because the sap pressure is at its maximum level. From this follows this rule of thumb: Prune strongly growing areas of a column cherry tree in summer to calm the growth. Cut weak growing areas in February to force growth.

Raising the column cherry yourself - is that possible?

The column cherry is a hit wherever majestic cherry trees are out of place. It is therefore obvious that hobby gardeners are flirting with raising the slim fruit tree themselves. In contrast to popular tall trunks, the bar for the structure of a cherry as a column fruit is significantly higher. The following arguments speak in favor of purchasing a column cherry from the master gardener :

Sweet cherries are therefore not born as column fruits. Rather, they initially thrive as a spindle tree in the nursery. Only when a cherry with a strikingly strong, straight central shoot and short side shoots attracts attention, is the specimen selected for further training as a column cherry. For this purpose, the master gardener refines the cherry on a poorly growing base. 'GiSelA 5' is highly valued thanks to its robust winter hardiness and early start of yield.

The column cherry does not need a support post. During the refinement, tree nurseries specifically use unbreakable supports that guarantee stability in growth from the start.

Is a column cherry self-fruiting?

Column cherries offered in specialist shops are mostly not self-fruiting. The providers sometimes declare modern varieties as self-fertile. Nevertheless, this attribute should be assessed with caution. It is generally advantageous for the harvest day and fruit quality if there is a second variety nearby. This can also be a large cherry tree in the neighbor's garden.

Does a column cherry planted in spring need winter protection?

Cherries are naturally sensitive to late frosts. The greatest danger is when temperatures drop below freezing during the flowering period. In this case, a fleece or large potato sack should be close at hand. Put a hood over the column cherry to protect the flowers from frost damage.

3 years ago I planted a column cherry, which is now almost 4 meters high. Unfortunately, only a few side branches have formed so far. Should I shorten the main shoot now or let it continue to grow?

To support the formation of side shoots, cutting the leading shoot is the right strategy. The best time is in early spring. Trim the leading shoot back to a sturdy bud. The result is a jam that encourages lateral buds to sprout. Shorten existing side branches to 15 cm at the end of June.

I planted my two column cherries Victoria and Sylvia last spring. Since then, both plants have grown by a meter and are now wearing a dense foliage dress in March, unfortunately without flowers. What can I do?

As a rule, column cherries bloomed from the second or third year in May. Even in the particularly mild spring, the flowers appear from mid / late April at the earliest. Column cherries plant the flower buds in the previous year, provided there is a balanced nitrogen-phosphorus ratio in the soil. The strong increase signals that your garden soil contains an excess of nitrogen. This fact can suppress flower formation. We recommend carrying out a soil analysis or at least administering a phosphorus-stressed fertilizer this summer so that numerous flower buds form.

My cherry tree had three long shoots at the top that I cut off. Do I have to expect the process to be repeated and the plant to be cut radically?

Of the three shoots, you should have left the central, long leading shoot. It is the point that fulfills the function of a crown on columnar fruit. This is not a cause for concern, as the cherry gives rise to a new central branch with complementary side branches. Please do not trim the new crown in height. Only shorten the side shoots to 10 to 15 cm at the end of June.

A wrong time for cutting or an overzealous cut leaves a cherry tree that doesn't deserve its name. The three most common cutting errors with information on damage and prevention are summarized in the following table:

In the pruning of column cherries, no thinning of the fruit hangings is necessary. When caring for apples, pears or peaches, excess fruit must be removed at the end of June. You can delete this date from the care calendar without replacement for cherry trees and column cherry trees.