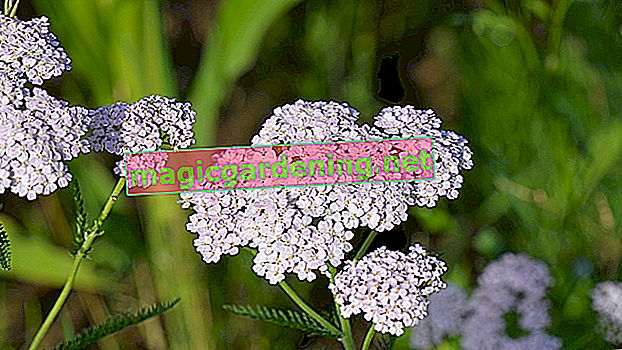 Specific dangers due to the likelihood of confusion with the yarrow

It is still relatively harmless to confuse it with the so-called meadowfoam, as it is also one of the edible herbs. The situation is different if, instead of the yarrow, a poisonous doppelganger such as the spotted hemlock or the giant hogweed from the Caucasus is cut for use in the kitchen, as a medicinal plant or for dry bouquets. After all, these two plants can cause serious health damage not only if accidentally consumed. Often just touching it is enough for extremely unpleasant burn blisters to form on the skin.

The spotted hemlock (Conium maculatum) is actually significantly higher than the yarrow with a stature height of up to two meters. However, there is still a risk of confusion with younger specimens of the plant that have not yet reached their full height. The spotted hemlock can be identified by the reddish spots on the stems. In addition, the plant spreads a pungent and unpleasant odor for humans, which is vaguely reminiscent of mouse urine. The possible complaints when consuming plant parts are due to the alkaloids they contain:

Another extremely poisonous doppelganger with a real risk of confusion when collecting yarrow is the giant hogweed (Heracleum mantegazzianum). This was brought in from the area of ​​the Caucasus and has spread widely in many natural landscapes. Even more than with the spotted hemlock, mere skin contact with this plant means danger. The giant hogweed differs significantly from the yarrow because of its leaves, but because of the white umbellate flowers it sometimes appears similar to children. If the plant is touched with bare hands, burn wounds that last for weeks can develop, which are exacerbated by direct sunlight.

In order to recognize the yarrow beyond doubt, you should take a close look at pictures and, if possible, have an expert show it in nature. In general, in the garden and on excursions into nature with children, the motto is that unknown or uncertain plants should not be touched and especially not consumed.