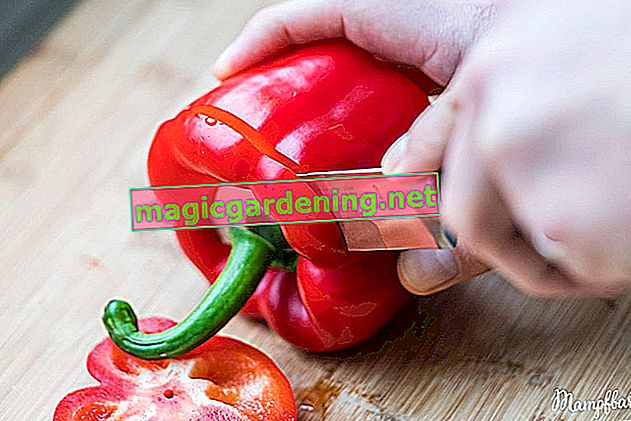 When pruning tomato plants, pruning is a mandatory horticultural program. Paprika is more tolerant of the measure and leaves the decision to you. Barren side shoots, the so-called stingy shoots, are removed with the aim of a higher flower yield and a correspondingly higher number of fruits. The unwanted shoots can be recognized by their position within a leaf axil, the fork of the main shoot and fruit shoot. How to properly skimp on pepper plants:

Have you prescribed regular pruning for your pepper plants? Then work is on the maintenance plan from the young plant stage. Stay on your heels until the first fruits appear. Experience in the cultivation of peppers shows that without pruning a densely bushy plant with large leaf mass and few fruits develops. Where sterile side shoots do not branch off nutrients for themselves, all the more reserve materials are available for the growth of juicy paprika fruits.

Continuous pricking is a double-edged sword. Primarily, the quality of the harvest improves. In return, the intervention affects the stability of a pepper plant. Without stingy shoots, the plants grow slimmer and less bushy, so that they are threatened by windthrow. You can prevent damage by placing a support rod next to the main drive.

The king's blossom is a thorn in the side of paprika gardeners with the goal of a high-yielding plant. The poetic term refers to the flower from the first hour, which is located in the center of the first branch branch. The plant pumps a large part of its energy reserves in the direction of its royal flower, so that further buds are left behind. Earning power benefits significantly when no royal blossom swings the floral scepter. Here's how to do it properly:

So that your pepper plant does not lack the strength for the following growth spurt, give an organic fertilizer every two weeks. Compost, horn shavings and plant manure are suitable. After the end of the flowering period, shorten the fertilization intervals to eight days so that voluminous and aromatic peppers develop from the numerous fruit sets.

Did you miss the time to break the royal bloom? Then you have a second opportunity to optimize the branching with fruit shoots and number of flowers. To do this, harvest the first fruit early when it is still green and half ripe. The pepper plant interprets the intervention as a loss of its ovules and immediately sets to work to produce more flowers and fruits for a large offspring.

The reaction of a pepper plant to the removal of the royal flower can be reliably predicted because an important law of growth is applied. Thanks to precise observations in plant growth, the knowledge about peak promotion, known in technical jargon as apical dominance, is owed. Buds on shoot tips receive disproportionately more nutrients than buds positioned lower down. By breaking out the royal flower of a pepper plant, you cause a more even allocation of reserve substances. As a result, more fruit tendrils sprout with flowers, which transform into crisp fruits.

Do not pick ripe peppers

The scissors are only used in the final stage of growing peppers. Skinning and removing royal flower requires dexterity. Ripe fruits, however, dangle from sturdy stems that resist any attempt at picking. For a skilful harvest, the scissors should therefore be close at hand. Ideally, place the blades in the middle of the fruit stem. Injury to the plant is excluded. Furthermore, peppers will last longer if a small piece of the stem is left on the fruit.

Cut before putting away

Another reason for pruning paprika plants is the upcoming winter. As tropical plants, peppers do not tolerate frosty temperatures, so that in our regions they are mostly grown as an annual. In their habitats, the plants thrive as perennial perennials, which hobby gardeners can take advantage of and organize winter storage behind glass. As part of the preparations, vigorous cutting plays a key role. How to Properly Prune Bell Pepper Plants Before Packing:

After pruning, dig up a bedding plant to plant in a pot of vegetable soil. If you have to make do with limited space in winter quarters, you can reduce an oversized root ball by up to a third. If your peppers thrive in the bucket anyway, the preparations are limited to a radical cut before putting them away.

Capsaicin is found in various forms in paprika. It is an alkaloid that provides the sharp taste. In vegetable peppers, the amount of capsaicin is hardly worth mentioning, whereas caution is advised in other varieties such as chilli or hot peppers. This doesn't just apply to the palate. Immediate skin contact can trigger allergic reactions and even burn symptoms. In the worst case, the alkaloid gets into the eyes and mucous membranes, which causes considerable discomfort. Do not dedicate yourself to your peppers until you have put on protective gloves and long-sleeved clothing.

Cut the peppers ready to eat

With their colorful skin and tasty pulp, the peppers protect their true treasure, the seeds. From the kitchen's point of view, the seeds could happily be deleted from the fruit's floral blueprint. To cut a pod ready to eat, it is usually first quartered, then cut into strips or small cubes. After that, the clean-up work at the workplace begins because the annoying seeds have spread over a large area. It doesn't have to be. How to properly cut a bell pepper:

Starting from the vertical cut, peel out the seed-rich inner life of the pod with the knife blade. A particular advantage of this method: the seeds in their chambers remain connected to the light-colored tissue and are removed in one go.

Are the stinging shoots of a pepper plant suitable for propagation?

In commercial and private cultivation, sowing dominates as a common form of propagation of paprika plants. This does not contradict to try the vegetative route with cuttings. Instead of carelessly throwing broken shoots onto the compost heap, put them in a pot with potting soil. Put a plastic bag over with a wooden stick as a spacer and keep the substrate slightly moist at all times.

Bell peppers are native to tropical regions of the world. Wherever pleasant temperatures prevail all year round, the plants thrive as perennial shrubs. Bell pepper plants are not designed for temperatures below freezing, so that wintering in the Central European garden is not possible. If the thermometer drops to 10 degrees Celsius, peppers stop growing and gradually die off. If you don't shy away from the effort and have a bright, frost-free winter quarters, you can guide the exotic plants through the cold season behind glass.

Is it possible to grow peppers on the balcony?

As a balcony gardener, you don't have to do without fresh, home-grown peppers. The plants thrive splendidly in the large tub, provided they are allowed a sunny, warm and sheltered location. As heavy consumers, paprika plants need a nutrient-rich soil, ideally enriched with compost. The necessary hold is provided by a spiral rod to which the main shoot and fruit shoots can cling. The linchpin in the care program is an adequate supply of water and nutrients. Plants evaporate abundant moisture, especially on hot summer days, so regular watering is important.

Are bell pepper plants self-fertile or should a second plant be in the bed?

Most home-grown pepper varieties are self-fertile thanks to hermaphrodite flowers with female and male reproductive organs. A single plant is sufficient for a rich harvest. In a location with no wind or in a greenhouse, it is advisable to shake the plant every now and then so that the pollen is evenly distributed.

If stingy shoots gain the upper hand in a pepper plant, fruit quality and yield fall by the wayside. It is similar with a plant when the royal blossom has the floral say. There is a lot of clean-up in the kitchen when you simply quarter a piece of fruit. The following table would like to protect you from typical cutting errors and has tips for the correct procedure:

Chilli plants benefit from consistent pruning, like their milder relatives peppers and tomatoes. It starts at a height of 35 to 40 cm. Break out of the leaf axils all nose-wise stinging shoots that compete with the fruit shoots for nutrients, water and light.