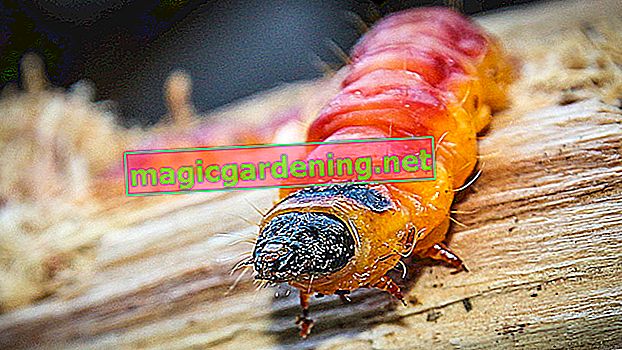 Rhododendrons are robust and uncomplicated ornamental trees. However, if the location, water and nutrient supply are not correct, deficiency symptoms or pest infestation occur.

The most common causes of rhododendron diseases:

Rhododendrons love light, partially shaded places. They thrive on acidic, humus rich soils with a pH value between 4.5 and 5.5. Location and weather damage such as sunburn or frost can be recognized by leaves or buds.

Direct midday sun causes sunburn in sensitive varieties. Recognizable by yellow or brown leaves, while leaf areas in the shade show no damage.

What to do in the event of frost damage?

Soil compaction or insufficient nutrient supply cause the nitrogen deficiency with the typical discoloration of leaves. Appropriate nitrogen fertilization compensates for the deficiency symptoms and strengthens the plant.

Deficiency of iron and magnesium

If young rhododendron leaves lose their dark green color and turn yellow while the leaf veins remain dark, these are signs of insufficient iron or magnesium.

Stunted stature due to lack of nitrogen

Stunted growth and yellowed leaves indicate a lack of nitrogen. Especially "the rhododendron variety Catawbiense" is considered to be a nitrogen eater. It needs a lot of humus, nutrients and horn shavings (€ 6.39 at Amazon *) as nitrogen fertilizer.

An application of nitrogen through artificial fertilizers should only take place in March and May. If fertilization is carried out later, the shoots will not mature until winter. They do not lignify or freeze to death.

Remedy for diseases caused by fungi, bacteria or viruses

The healthy and generally robust raw dodendrons are rarely attacked by fungi, bacteria or viruses. In the case of weakened plants with fungal infestation, it is advisable to remove the infected parts of the plant immediately, to burn them or to dispose of them in some other way from the garden! This is the only way to permanently avoid fungal attack in the garden.

The phytophthora fungal genus includes more than 20 species. They cause root, stem, shoot and fruit rot, but also fall-over diseases in rhododendrons and other plants. The fungal spores need water and light to germinate. Waterlogging and warm, humid weather favor infestation.

Dry branches, brown terminal buds and brown leaf spots along the leaf midrib indicate an infection with Phytophthora fungi. Also gray-brown discolored leaves that roll up without falling off are included. Among other things, the harmful fungus clogs the conduction pathways and the plant dies completely or shoots off. The bark in the diseased root area is colored red-brown when cut. In contrast, healthy tissue appears light and juicy.

In the course of winter, the buds of "the hardy rhododendrons" brown and die. The shrub does not sprout buds the following spring. The most common cause of this is the harmful fungus Pycnostysanus azaleae. The fungus becomes visible through small black hairs on the fruiting body in spring.

It is not clear whether rhododendron leafhoppers are involved in the fungal attack when the buds die off. Chemical control of these animals should therefore not be used. Since fungicides do not work against the fungus, all that remains is to remove suspicious dry buds by April at the latest. In good time before the yellowish larvae of the rhododendron cicadas hatch in May.

As a preventive measure, yellow boards can attract and destroy insects in summer.

Animal pests include rhododendron cicadas (Graphocephala coccinea), rhododendron skin or reticulated bugs (Stephanitis rhododendri) or weevils such as the black weevil (Otiorhynchus sulcatus). They eat leaves, roots or suck nutrients from the plant and lay their eggs.

Depending on the pest, there are conspicuous feeding patterns, cripples and soiling on the leaves. The undersides of the leaves usually appear rusty and black droppings can be found. In individual cases, the larvae of the weevil cause damage to roots.

From gentle damage control to a powerful destruction weapon, everything is available in stores to destroy voracious insects. Strong agents against pests also have strong side effects on beneficial insects. Instead of radical poisons, we recommend environmentally friendly measures to keep the population within a manageable, non-damaging framework.

Each rhododendron variety requires special location conditions. To find the right variety for your garden, it is advisable to plant different types of rhododendrons. After a few months you will be able to see which rhododendrons are growing and blooming lavishly without extensive soil improvement.