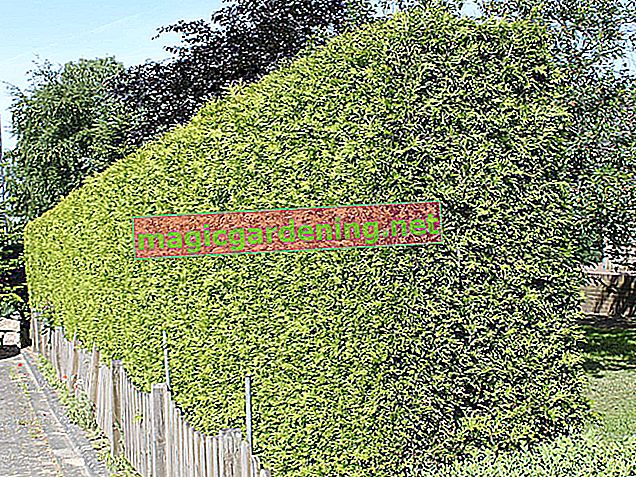 When do you need to cut thuja?

In principle, you can cut thuja at any time of the year. Cutting is not advisable only in frosty weather, as the cuts then become discolored.

A young thuja hedge must be pruned twice. Only then will the tree of life form many small side shoots and become opaque.

In spring, the hedge is pruned more heavily, from top to bottom. The thuja is cut so that it tapers to a point at the top. In the summer you only cut a little to keep the shape of the thuja.

Cut older thuja hedge only once

An older thuja hedge only needs to be cut once a year. The best time for pruning is early summer, at the end of June.

However, you must not shorten the hedge too much, as heavy prunings are not allowed in summer due to breeding birds.

If a heavy pruning is unavoidable, you have to postpone this to spring.

The right day to cut thuja

Cut a thuja hedge on a day when the sun isn't beating down the sky. When exposed to sunlight, the interfaces of the thuja turn brown.

Even if its shoots are completely wet, you shouldn't prune a tree of life. Fungi can penetrate the shoots through the interfaces and the tree becomes ill.

The last cut of the thuja takes place in late summer. If you prune the arborvitae in October or later, you will encourage new growth. The young shoots can no longer harden before winter and then freeze to death.

Cut thuja as a topiary

When caring for thuja in a spherical shape or as a spiral, you have to use scissors up to three times a year. The basic pruning is done in spring when it is no longer freezing.

A second cut is made at the end of June when the new growth slows down.

The last shape cut takes place in late August. Only individual shoots that protrude from the shape are removed.

Never cut thuja behind the green

Only use very clean tools to cut a thuja hedge, which you can clean immediately after use. This will prevent you from transferring diseases or pests from one plant to another.