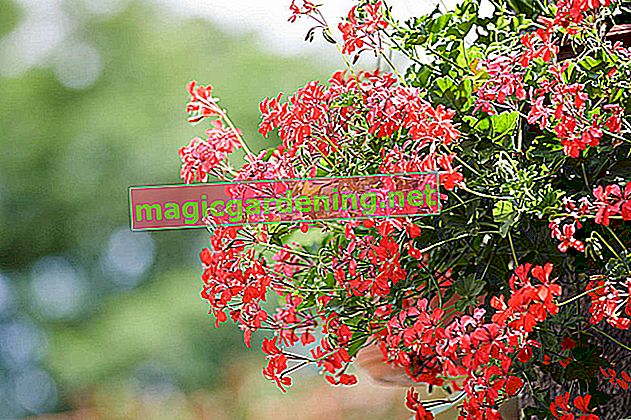 The easiest way to propagate your geraniums is vegetative using cuttings. In this way, you can also multiply particularly beautiful plants, because cuttings are clones of the mother plant and are therefore completely the same. The best time to cut the cuttings is late summer / early autumn, i.e. the months of August and September.

Plant the young plants in a larger pot in spring and harden them gradually.

Little is known that pelargoniums can also be multiplied by division. However, this is only possible with older plants from the age of four to five years. It is best to split at the beginning of spring shoots as soon as the first fresh shoots appear - this is usually the case in March or April. It is best to combine this measure with repotting the plant, carefully pulling it and its roots apart with your fingers. Then the sections are planted individually and poured on.

Growing geraniums from seeds - either self-collected or purchased - is also great fun. Sowing should be done in January, but no later than February of each year, so that you can enjoy the flowers of your self-grown geraniums in summer.

When propagating cuttings, make sure not to use any soft and completely green shoots. These tend to rot and are therefore not very suitable.