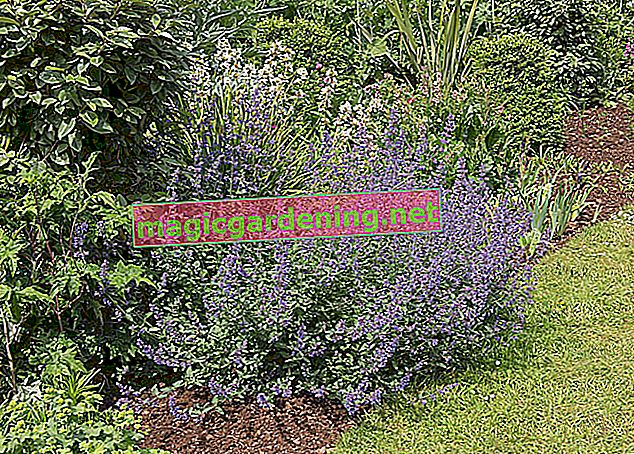 A pruning, for example, in the event of illness, lets the catnip know: 'You have to assert yourself!'. If it is infected with powdery mildew, it helps to remove the inflorescences in summer. This allows the catnip to invest its attention and energy in fighting the fungus.

To extend the flowering period

If you want to enjoy your catnip's flowering until autumn, you should cut the perennial after the main flowering.

Cut the plant either just above the ground or the inflorescences down to the first leaf. Then new flowers appear and flowering lasts until autumn. A good side effect: the self-sowing of the catnip is prevented.

To slow down the urge to spread

Another reason in favor of pruning catnip is to slow down its urge to spread. This is done in spring between February and March on a frost-free day, cutting back to the ground. It is best to use sharp secateurs for this procedure.

Don't be too hasty and make the mistake of cutting your catnip in the fall. Only the withered inflorescences can be cut back in autumn. The remaining stalks serve as protection against moisture, for example from snow in winter.

For use as a medicinal and aromatic plant

It should not be forgotten that some people use catnip as a medicinal and aromatic plant. For example, individual flowers can be cut off in summer and used to add color to dishes such as sweet desserts and fruit salads. Likewise, the stems with the leaves can be cut off, dried and reused, among other things:

On top of that, you cut the catnip in order to propagate it. Propagation via cuttings is considered the most proven and most common method. The cuttings are ideally taken from the plant between April and June. The lowest leaves are then removed and the cuttings are placed in a glass with water in which they can take root.

Even if you feel annoyed by cats because they like to be around the catnip, it helps to radically cut the catnip. Then you will have enough time to think of an obstacle for the cats.