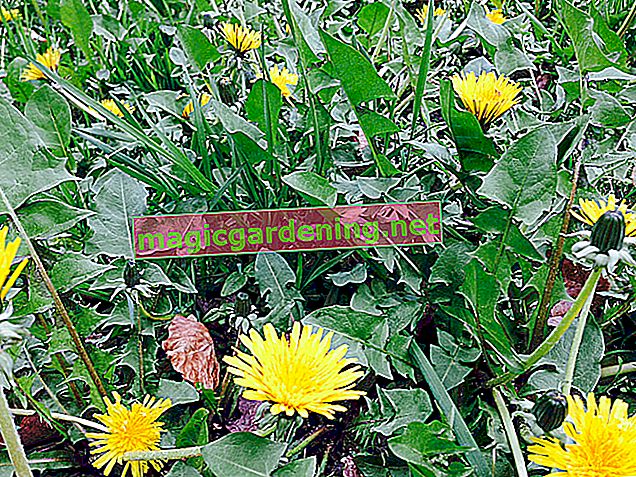 Doppelganger with killer qualities - the spotted hemlock is deadly poison

The damage to health after contact with giant hogweed is harmless compared to a highly poisonous doppelganger. Spotted hemlock (Conium maculatum) has a poison flowing through it, which even in tiny amounts can lead to death. To this day, the term hemlock is synonymous with death and perdition, because the poisonous plant was used for executions in ancient times. The most famous sacrifice was the philosopher Socrates in 399 BC. The pronounced likelihood of confusion between giant hogweed and spotted hemlock is based on the following similarities:

Since contact with giant hogweed is not fatal, but can cause skin burns, we recommend rigorously removing both plants from the garden. Put on protective clothing, eye protection and boots and completely destroy all plant remains.

Dog parsley (Aethusa cynapium) can also hardly be distinguished from giant hogweed. In terms of toxicity, the dreaded weed is of course on par with the spotted hemlock. The likelihood of confusion with kitchen parsley, however, is much greater.

Harmless floral counterparts are in the majority - just don't panic

Do not be unsettled by the numerous warnings about giant hogweed and its poisonous counterparts. Indeed, the vast majority of similar plants are perfectly safe and important for ecological balance. The following overview lists non-toxic plants that look deceptively similar to hogweed:

A frequently misunderstood doppelganger von Bärenklau should not be missing from this list. Ground elder (Aegopodium podagraria) is much better than its reputation. Instead of vigorously combating the vigorous plant as a weed, ecologically-minded house gardeners with a weakness for natural cuisine have discovered groundwater as a tasty wild vegetable.

The appearance of giant hogweed or spotted hemlock is not subject to notification despite the potential danger. If you discover one of the two plants in the field and in the forest, we recommend that you report the location to the environmental office or public order office. The immediate control prevents further spread and prevents children playing from being harmed.