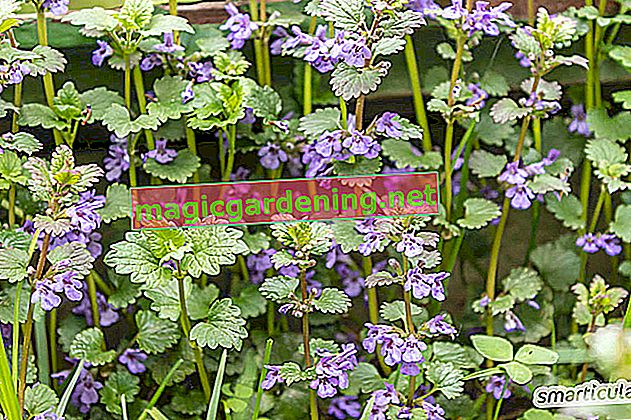 This is how Gundermann spreads in the garden

Gundermann is a small, delicate, edible plant that reproduces via seeds, but above all via runners. The mother plant quickly forms up to two meters long tendrils, on which new plants emerge every ten centimeters.

Whether the soil is dry or compact, whether the location is sunny or shady - Gundermann doesn't care. It grows on almost every spot, even in front of walls it does not stop.

Fighting Gundermann is advisable for two reasons. Gundelrebe deprives other plants of light and nutrients, making them difficult to thrive and die. The herb is also very susceptible to fungal attack. There is a risk of surrounding plants becoming infected.

How can Gundermann be removed?

The trade offers some means with which a chemical control takes place. Unfortunately, none of the previous remedies shows a long-term effect. You can save yourself the need to spread it because it is of little use anyway.

The best option is to go organic by removing the weeds by hand.

Make sure that you catch all of the roots as possible, because Gundermann sprouts out even the smallest remains of roots.

Fighting Gundermann in the lawn

Gundelrebe is so robust that it spreads even in dense lawns. Frequent mowing of the lawn, as is recommended in the case of ground elder, is not advisable when combating Gundermann. On the contrary, the short grass creates ideal conditions for further spreading.

With Gundermann in the lawn, only continuous cutting out of the plants helps.

There are a few things you can do to help you fight Gundermann. For one, the herb doesn't like strain. You won't find tendrils on sidewalks. If you want to leave Gundermann in shady places for underplanting, make sure that the garden area is separated by garden paths.

So that the Gundermann cannot also reproduce via seeds, pluck the herb out before flowering if possible. You can recognize it by its characteristic leaves, which are a bit like ivy, but smaller. That is why Gundermann is also called creeping ivy.

Leave extended Gundermann plants on a stone until they have dried up. Then the roots cannot regenerate and you can dispose of the herbs on the compost.

Gundermann or Gundelrebe is not poisonous to humans. The leaves can be eaten in salads or used as a medicine. The flowers are very hot and used to be a substitute for pepper.