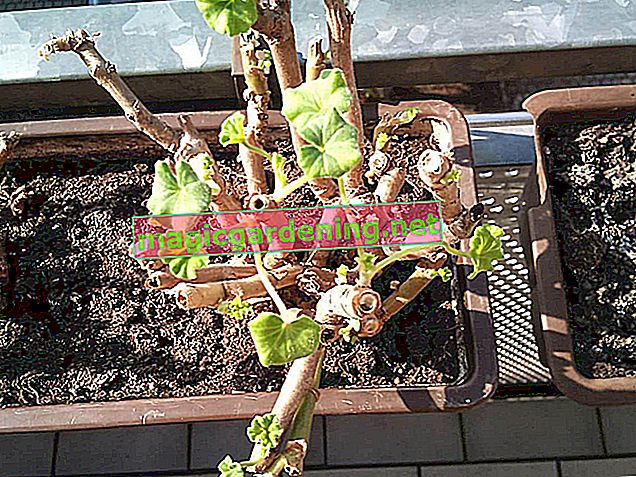 The autumn pruning is carried out before the first frost, ideally around mid to late October, and is quite radical. All of the leaves, flowers and buds are removed, so that only the bare skeleton remains. Finally, you will also shorten this by about half to two thirds. The reason for this clear cut is that the plant loses little moisture in winter, does not have to be watered and still does not dry out. This cut also minimizes the risk of bacteria and fungi.

Another cut back in spring

How to recognize dead shoots

You should also remove dead plant parts when pruning in spring, but you should proceed with caution. Older, lignified geranium shoots in particular often look dead, but are not. So that you don't accidentally cut back the wrong stems, if in doubt you should be on the safe side and test the supposedly dead shoots:

Don't forget to cut your roots

In the course of the spring pruning, not only the above-ground shoots but also the roots are cut back vigorously. Generously remove fibrous, thin roots, as well as putrid and dead areas. You should also cut back the main and stem roots a little. This measure thins and rejuvenates the rhizome; also ensures that new roots are strongly stimulated to grow - the more vigorous and beautiful the above-ground parts of the plant grow.

In addition to the pruning measures described, you should also regularly break out or cut away what has faded. In this way you not only minimize the risk of disease, but also ensure that the plant invests its energy in developing new flowers.