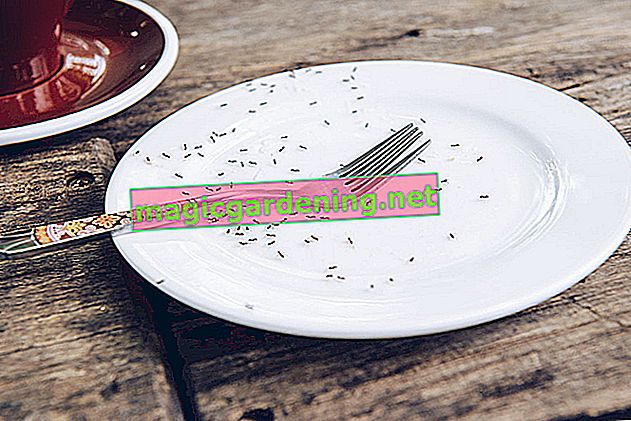 Does baking soda help against ants?

The home remedy is used to fight ants, but disappointments keep coming back. Baking soda seems to work in some cases while it doesn't have any visible effect in other situations. There are good reasons for this, because baking soda only helps under certain conditions and when used specifically. It also matters which baking soda you use.

The leavening agent consists of a CO2 source and an acidifier. Sources of carbon dioxide are sodium hydrogen carbonate (short: soda or NaHCO3) or potassium hydrogen carbonate. Various substances are used as the acid source. Weinstein baking powder contains natural tartaric acid, which is produced in the production of sparkling wine. Traditional baking soda contains phosphate as an acidulant.

How does baking soda work?

In the water the sodium dissolves with a weakly alkaline reaction. The heat in the oven, deep fryer or waffle iron reacts with the acid, releasing carbon dioxide. This process weakens the alkaline effect of baking soda somewhat. The reaction can be recognized by the small gas bubbles that rise in the dough and loosen it up. A shoot is achieved similar to when yeast is used.

It has been suggested that baking soda has a similar effect on ants. Baking soda is said to expand in the stomach after ingestion, so that the insects eventually burst. However, this assumption is a myth.

Possibly this theory stems from the staghorn salt, which was also used as a raising agent in the past. This is a source of toxic ammonia and is therefore harmful to health if consumed immediately.

The 1914 “Book of Rules for Druggists” describes sourdough as an effective ant killer. The yeasts are supposed to ferment in the ant stomach so that the insects bloat and die. That could also be a possible reason why baking soda is suspected of making ants pop.

Why does baking powder still help against ants?

American researchers found out in 2004 that baking soda was actually toxic to ants. They suspected that the internal pH of the ants rose unfavorably. This impairs the function of certain enzymes, which is why the ants die after consuming baking soda. Presumably ants ingest the powder through trachea or when cleaning the pollinated antennae. The insects don't eat the powder for no reason. An attractive bait mixed with baking soda can tempt them to eat.

Trachea are particularly important for life in the country. They are air channels that run through the entire body and supply the cells with oxygen. In some places they flow outwards. The ants have these openings on their chests. These powerful respiratory organs can be actively closed. If they are blocked by the smallest particles, the insects can no longer breathe.

In the experiments, the ants were forced to stay permanently on the surfaces dusted with baking powder. Red fire ants and Argentine ants were examined. Four milligrams of soda were scattered per square centimeter. After six days, about 99 percent of all insects exposed to a concentration of 152 mg sodium hydrogen carbonate were dead.

The ants were also given a bait made from sugar water and varying levels of NaHCO3. If this was five percent, half of the insects died after six days. The highest mortality rate was observed at this concentration. It has not been established that baking soda is effective in fighting the ants plague. With the agent you can kill ants directly, but not the queen and brood in the nest. If you want to make a feed bait, the concentration of the baking powder is decisive for its effectiveness. Baking soda with potassium hydrogen carbonate has no corresponding effect.

Find out from what concentration the ants accept the bait and reduce or increase the concentration if necessary. Ants generally accept bait made from liver sausage or tuna. However, different baking soda concentrations may be necessary here than in a solution with water, baking powder and sugar.

Things to know about baking powder:

What can you do against ants?

It is difficult to find effective home remedies other than baking soda that actually kill ants. Various agents have deterrent effects on ants. Such substances can be used in ant trails. They don't help if there is a nest in the building. Ants generally avoid areas that are covered with dust. The particles can get into the breathing openings and clog the trachea. Such barriers only work if there are high concentrations of the particles in the air we breathe. The barrier effect quickly wears off outdoors as winds carry away the fine dust particles. In the apartment, ants can quickly find a detour around the applied line. Therefore, you should use this method at the entrance gates and make sure that the ants cannot find any other access to the apartment.

Various intensely smelling substances confuse the ants' sense of direction. The insects use their antennae to find traces of smell from their fellow species. This is how ant trails are formed. If an impenetrable scent barrier covers the pheromone markings, the ants can no longer find their way. Here, too, the ants get to the old road via detours, which is why you should use scents directly at the access crevices. You can protect yourself against winged ants from outside by hanging insect screens in front of the windows. It is more problematic if the insects with wings appear behind the cabinet or crawl out of crevices in the ceiling and floor. They suggest a nest in the partition walls and beams. The males swarm out to find partners from other colonies. Ants avoid inbreeding and do not mate within a colony. Let the ants escape the apartment and focus your attention on the existing nest.

Flying ants are problematic when they crawl out of the walls.

To ensure that no more ants settle in the house after the control has been successfully completed, nests and scent marks must be removed. New colonies quickly discover the optimal nesting opportunities through traces of pheromones. Since there is no competition from the old people, there are no longer any obstacles in the way of the new colony and they take over the nest.

Don't let it get that far and close facade cracks and gaps on doors and windows.

It is often recommended to relocate the ants with a flower pot. However, this method does not work for most species. It can be used on earth-dwelling insects after the burrow has been made uninhabitable by heavy rainfall.

Fill a clay pot with crumpled and slightly moistened newspaper and place it over the nest directly after the rain on sunny days. The ants will begin to move their brood to the drier environment. Place the pot at least ten meters away so that the ants cannot follow the path back. Replace infected roof beams with new ones. Some species of ants settle in built-in wood that has already been damaged by moisture, fungi and insect pests. Thermal insulation can also offer ideal conditions if it has been impaired by moisture. Such materials can no longer fully fulfill their actual function and should therefore be renewed. Pay attention to possible sources of moisture in the kitchen and bathroom and eliminate them. Ants prefer moist environments.

Common species in their habitats

Ants are part of nature. No garden is ants-free and so the insects can quickly find access to houses. Buildings that are surrounded by densely vegetated beds or are located near the forest are particularly at risk. Ants in the house and garden are a symptom and indicate very specific factors.

At the German Ant Conservation Center you will find addresses of experts who can help you determine.

Some species of ants build their nests underground in the substrate. They feed on the honeydew that root lice produce. An ants infestation in the lawn indicates that the grass roots are infested with lice. If the insects find abundant food sources, they can also settle in the flower pot or in the greenhouse. The insects enter the apartment unnoticed when the buckets are brought into the apartment from the balcony for the winter. Many species have specialized in living in dead wood. They are tied to trees and settle in wood that has already been damaged. If the garden has old fruit trees, the insects find optimal nesting opportunities and at the same time food. They feed on the fruit and honeydew of the aphids.

It is not uncommon for such species to nest in the house. Built-in wood looks attractive if it is impaired by moisture and has already been damaged. Ants prefer environments with a moist microclimate, otherwise their brood will dry out. That is why they like to build their nests in the partition walls of the kitchen or bathroom.

What is behind the myth of baking powder against ants?

Baking powder expands in the dough under the influence of heat, causing gas bubbles to form. It is often assumed that a similar effect occurs in the ant stomach. This assumption is not true. Rather, baking soda seems to be responsible for the death of the ants. Researchers believe that this causes a change in the pH level in the hemolymph. Certain enzymes are no longer functional, which causes the ants to die.

Why don't home remedies for ants help me?

On the one hand, the insects are very picky and do not eat all the sweet poisonous substances that are offered to them. They also look for alternative detours if a substance hinders their ant route. The concentration of certain resources is also decisive for success. If fragrances or food poisons are too low in concentration, they will not work. If the dosage is too high, the deterrent effect is given. However, ants also avoid poison if the substances are too concentrated.

How can I protect myself from ants?

Take preventive measures and lock all entry gates. If there is already a nest in the building, more complex measures are necessary. It won't help if you just deal with the plague of ants. Rethink all the options for a renovation. Most of the time, the affected building materials are already damaged. The effects of moisture, insect pests and fungi have done the preparatory work for the ant nest.

Why do ants keep coming back?

The insects are strongly based on smells. In this way they find mating partners, other races and food sources. If an ant colony has been exterminated, scent traces usually remain. This attracts more ants, which settle in the old nest when there is no competition. Ant trails are also used again and again if the pheromone markings have not been thoroughly removed. This also applies to detours. The insects first use remote paths before they find the shortest route.

Why do I have to identify the species of ants in order to control them?

Each species has different habitat preferences. Not all ants nest in the house when an ant trail has formed. There are both terrestrial and wood-dwelling species that prefer different food sources. In addition, not all ants respond equally well to the different control agents. The brown garden ant is often unimpressed when typical pesticides are used.