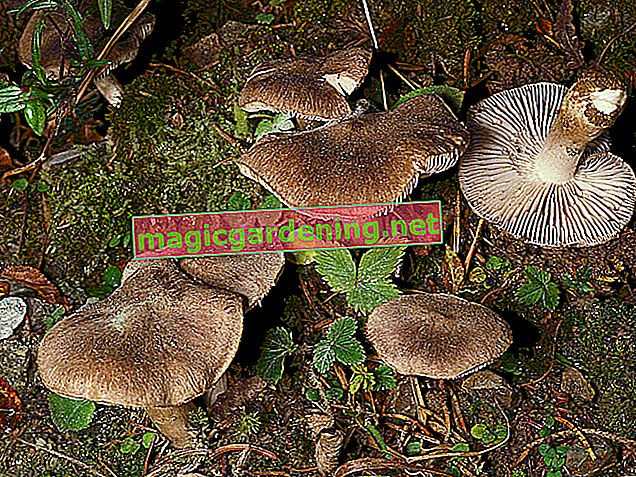 Appearance of the oyster mushroom

The oyster mushroom can be very variable in its hat color, from ocher to slate gray to brown, everything is possible. The hats are also arranged in the shape of a shell and roof tiles one above the other.

The side-stalked hat is only shell-shaped and rather small in young oyster mushrooms; older specimens develop oval to funnel-shaped hats up to 15 centimeters in size. In addition, the hat is curved inwards at the edge. Typically, oyster mushrooms that grow in cool summers are more beige, in autumn and winter they turn darker in color from slate gray to brown. They never stand individually, but rather above one another.

The wide, distant lamellae are whitish to cream-colored in young mushrooms and only turn yellow with increasing age. They always run down a stick.

The white to brownish stem usually sits on the side of the hat and is usually very short or even only indicated.

The flesh of young oyster mushrooms is whitish and soft, with age the mushrooms, especially in the stalk, become tough.

The slightly poisonous mussel mushroom is much smaller and has lamellas that stop abruptly at the yellow velvet stem.

When and where to look

When stalking oyster mushrooms, you have to take a close look at thick, lying or standing dead wood from deciduous trees - especially that of beeches. You can even find something in snow in the cold season, because oyster mushrooms only develop fruiting bodies from 11 degrees Celsius and less. This makes them perfect for a Christmas menu made from mushrooms that you have picked yourself. It is mainly collected in the months of December to March, although oyster mushrooms can sometimes also be found in cool, damp summers.

The oyster mushroom is one of the edible mushrooms that can be cultivated very well in the garden or even on the balcony or even in the cellar. He is able to use various substrates such as straw, paper, coffee grounds or wood.