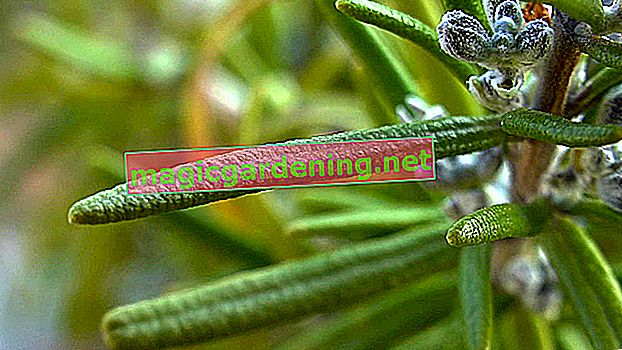 Rosemary tastes best fresh from the bush, as it then still has the largest proportion of essential oils. However, these evaporate quickly, which is why you should not store the spice for long unpreserved. For fresh use, it is best to harvest whole branches and pluck the necessary needles from them. You can add the needles whole or chopped to the food, with the rosemary cooking as long as possible. With stews, it is possible to cook whole branches, which are simply fished out again at the end of the cooking time. The flowers of rosemary are also edible, they make a great impression, especially when sprinkled over salads.

Both the flowers and the leaves can be preserved in various ways. You can dry, freeze or soak rosemary in vinegar or oil - just as you like. As with fresh rosemary, it is important not to leave the harvested branches lying around for a long time. Process rosemary as soon as possible so that the aroma is retained. For this reason, drying rosemary should never be exposed to the blazing sun, as this only makes the volatile essential oils evaporate faster. But whether fresh or preserved: Use only healthy rosemary parts and leave wilted or dry-looking twigs aside - you will most likely not like them.On the other hand, you can safely use yellow spotted leaves in the kitchen.

Older, de-needled sprigs of rosemary can be used as a kebab skewer: Simply perforate cubes of meat, fish, vegetables or cheese and skewer them on the rosemary sprig. Then the spit is drizzled with olive oil and cooked on the grill or in the pan. The typical rosemary aroma permeates the food through the branch.