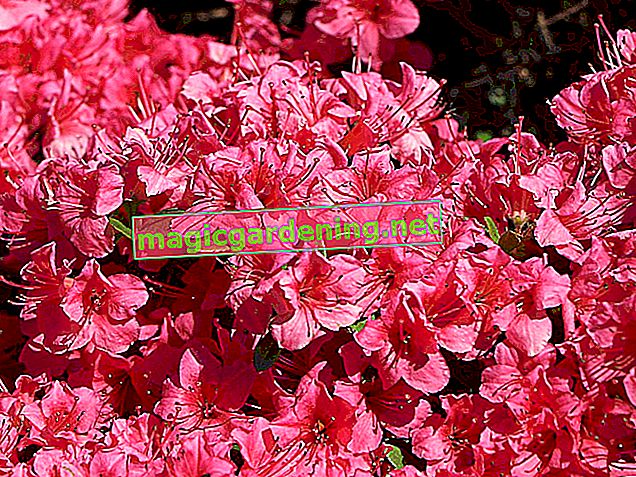 Which location do Japanese azaleas prefer?

The plant prefers a rather light to partially shaded location, if possible in the shade of tall trees. Full sun should be avoided.

Like the rhododendron, the Japanese azalea is also a bog plant. It prefers an acidic, humus and therefore nutrient-rich soil. PH values ​​between 4 and 5.5 are ideal.

When is the best time to plant?

Azaleas can be planted both in spring between mid-March and early May and in autumn between September and November - ideally by the end of September so that the plant can establish itself sufficiently before winter. If possible, give preference to autumn planting.

Which culture is better: planting in the garden or cultivation in the tub?

Since the Japanese azalea is hardy, you can plant it in the garden without any worries. As long as the pot is wide (azaleas are shallow-rooted!) And big enough, the plants will also feel very comfortable in a planter.

How big should the planting distance be?

As shallow roots, azaleas need a lot of space to accommodate other plants - especially trees and other woody plants! - do not dispute nutrients or water from them.

Planting Japanese azaleas correctly - this is how it's done

Here's how to plant the Japanese azalea:

When does the Japanese azalea bloom?

The flowering time of the Japanese azalea lasts from April to May. As with the rhododendron, the plant already sets its flower buds in the previous year.

Can you propagate the Japanese azalea yourself?

The Japanese azalea is very easy to propagate using cuttings or sinkers.

Can I transplant a Japanese azalea once it has been planted?

Transplanting should not be a problem, at least for specimens that are not yet too large. The best time for this is after flowering in May.

Be careful when handling and pruning the Japanese azalea: it is slightly poisonous.