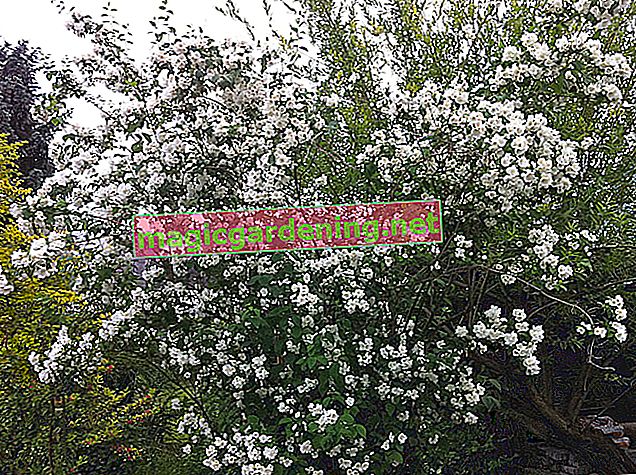 In contrast to some of the ornamental plants commonly known as 'jasmine', winter jasmine is a real jasmine - so it actually belongs to the genus Jasminum. Its species has the addition of nudiflorum to its name, which in one of its German names is also literally translated as “Nacktblütiger Jasmin”.

Its home area is the rocky heights in the northern and western areas of China, where it populates low-vegetated slopes and gorges with harsh weather conditions. It is therefore very tough by nature and can withstand extreme heat and cold as well as rough winds. In addition, despite its areas of origin remote from civilization, it is very firmly established in the city and accepts the exhaust-gas-laden air in large cities without complaint. Therefore, it is also a perfect candidate for the front garden ornament of houses on large streets.

Winter jasmine has been widespread here since its introduction from China in the 19th century. You can see it in many gardens and in parts of Central Europe it has long since been released into the wild.

In terms of growth, the winter jasmine has amazing things in store. In gardens you can usually see it in a very unspectacular, shrubby habitus in bounding hedges. As a free-growing shrub, it becomes up to 2 meters high and 3 meters wide. Its four-edged, bulky, tough branches grow arching and overhanging and can get out of hand as the plant ages. They are initially green, but lignify very quickly and turn brown.

The winter jasmine grows very slowly in the first two years, but then all the more intensely.

The winter jasmine can also be cultivated in a completely different way. On the one hand, it can be used as a ground cover due to its broad growth and long, rooting branches, if it is trained accordingly.

You can also use it to green or flower walls and house walls. The winter jasmine is a spread climber and can also climb vertically with a climbing aid. In this culture form it can also reach heights of up to 5 meters.

On the branches, the jasmine forms pinnate leaves in an opposing arrangement, each with three small, dark green, shiny individual leaves. These have an egg-shaped, whole-edged shape of about 1 to 3 cm in length. They are summer green, so they are shed towards winter.

The flowering is of course the highlight of the winter jasmine - after all, it appears unusually early and has given the shrub its name. They are formed individually standing directly on the armpits of the previous year's branches and literally litter them with their yellow pile.

The flowers are very similar in size, shape and color to those of the forsythia, but they have more, more precisely five to six petals, which are also rounder and not as long. There are only two stamens. Unlike most other species of the genus, the flowers of winter jasmine do not develop a fragrance.

The winter jasmine also has the early flowering period in common with the forsythia, although it turns out much earlier. In mild weather, they can exude their fresh yellow in the garden as early as the end of December. The flowers also persist for a long time, into April - unless there is another strong frost by then, when they can freeze to death, but often sprout again.

The winter jasmine hardly ever produces fruits in Central European latitudes. When they appear, they are egg-shaped berries about 6 millimeters long and about 3 to 4 centimeters in diameter.

As for the location, the winter jasmine is extremely frugal in many ways. Since its natural habitat brings with it rather harsh weather conditions, it can cope with many extremes such as strong heat and solar radiation, frost and gusty winds. In terms of light, it should be more sunny, but also thrives in partial shade. It also makes hardly any demands on the soil - although it prefers a relatively nutrient-rich, freshly moist and more permeable planting base, it also grows without any problems in poor, sandy soils. In terms of pH, he prefers it rather chalky.

It is best to plant a winter jasmine in early spring to give it the opportunity to establish itself well over the warmer half of the year. The same applies if you want to grow the winter jasmine in the bucket. In this case, however, planting in autumn is also possible. Winter jasmines planted outdoors should be protected from severe frost with fir branches in the first winter.

If you want to incorporate the winter jasmine into a hedge, for example together with other deciduous hedge plants such as privet or hornbeam, you should plan a distance of at least one meter to the sides.

If you want to let it climb up a house wall, you only need to stick to about half a meter from any neighboring plants, as the focus here is on the growth in height.

As a rule, you do not need to water the winter jasmine separately. He has developed a largely self-sufficient way of life due to his coarse origin and is self-sufficient in many ways. However, it is advantageous if he is planted in a ground that is already evenly moist.

Winter jasmine does not have any additional nutritional requirements. If you want to do something good for him, you can give him a little compost in the spring or a liquid fertilizer with a calibrate base. In any case, its soil should be mended with compost when planting.

If you keep the winter jasmine in the bucket, the fertilization with compost or liquid fertilizer is of course a little more justified because of the lower substrate volume. If you value strong flowering, you should definitely use fertilizer containing phosphorus and potash. Nitrogen-containing, growth-promoting fertilizers are not suitable for winter jasmine, if only because of its low leaf mass.

The winter jasmine is characterized by a rather sparse growth - and with increasing age also by a rather brisk growth rate. If you don't want it to get out of hand and make an unkempt impression, regular pruning measures are essential. However, if you start right at the beginning, nothing stands in the way of a handsome, well-formed shrub.

The winter jasmine is extremely easy to cut. This means that even neglected older specimens that have long been lignified in the center and only sprout green at the outer ends of the branches can be rejuvenated by radical pruning. They sprout reliably and develop a very fresh, compact appearance again.

Otherwise, we recommend pruning every year in spring immediately after flowering. This promotes vital growth and good flower bud development until winter.

If you cultivate the winter jasmine as a ground cover, you have to keep it in check with its intensive will to spread. Most of the time, it is not just shortening the shoots after flowering that helps - due to the strong tendency to take root, you usually also have to pull out all-too-far-reaching depressions.

The winter jasmine has a healthy instinct for self-preservation, which can be seen in its intensive rooting practice. This of course makes it easier for you as a hobby gardener to multiply. The best way to do this is to simply use the offshoot or the lowering method.

For an offshoot, simply cut a young, developed shoot with incipient lignification out of the shrub in spring or summer. In order to accelerate the rooting process, it is best to make a light, not too deep wounding cut in the lower part to be planted.

You put the prepared cuttings in a container with potting soil and cover it with foil if possible to create a consistently moist microclimate. Place the seed container in a light and warm place. The young plant is ready for planting after just a few months, but it is better to wait until later spring in the following year.

The winter jasmine willingly forms a sinker so that you only have to help yourself. Even if you keep it as a hedge shrub, its overhanging branches can unexpectedly take root in the surrounding soil. In the case of ground cover culture, the selection of rooted subsidence is of course even greater - here they become rather annoying and have to be constantly decimated.

If there is no acutely rooted subsidence, simply lead a branch with the still green part down and fix it in the ground with a metal hook.

A sufficiently rooted sinker can be cut off with a spade and replanted elsewhere. However, the rooting should have continued throughout the spring and summer period.

Winter jasmine is pleasantly robust against diseases. As a rule, you don't have to worry about him.

Powdery mildew affects not only the leaves of its host plant, but also the not yet lignified stems.

Fortunately, the disease is very easy to identify thanks to the fluffy, loose, white coating on the leaves. Over time, the covering turns brownish-grayish and the leaves also turn brown and finally dry up.

In order to prevent powdery mildew, you should above all ensure a healthy, active soil life at the planting site of the winter jasmine. This increases his general immune system. To do this, you supply him regularly with, for example, homemade broths made from herbs such as field horsetail or with cow's milk. The lactic acid bacteria it contains have a positive effect on soil life. In addition, the planting ground should be mulched around the bush.

If an infestation has already occurred, you should first - as with almost all fungal diseases - remove all diseased parts of the plant as thoroughly as possible. You can dispose of them on the compost because the fungus only survives on living plant tissue.

In itself, powdery mildew does little harm to winter jasmine. You do not have to take the control measures for its survival.

Unlike forsythia and some other early bloomers, winter jasmine is not poisonous and is therefore a completely harmless garden plant. However, the fear that it could be poisonous is not entirely unjustified. Because many of his namesakes are very poisonous. Above all, however, false jasmines should be mentioned, which do not belong to the genus Jasminum and only have the name jasmine in their trivial names.

Poisonous representatives of false jasmines are, for example, the scented jasmine, the star jasmine, the Chilean jasmine, the yellow or carolina jasmine or the jasmine blossomed nightshade. At most, there is a risk of confusion with forsythia, which is only slightly poisonous.

The winter jasmine is also suitable for bonsai cultivation due to its very flexible, insensitive branches and its very high cut tolerance. So if you have a weakness for form-educating mini-tree education, you can shape a young winter jasmine well in a pot into artistic figures with small crown umbrellas and bizarre contours. All techniques including wires can be used for this.

There are no special varieties of winter jasmine. However, a distinction is made between certain varieties, which differ significantly from one another in some respects.

The nudiflorum variety is the usual winter jasmine, which is also the subject of this article.

At 0.3 to 1.2 meters, this variety is significantly smaller than the most common variety here. Its very fine, about 1 mm thick branches are leafless at the tips and become thorny. The bloom also appears much later, not until April, and can stay until September.