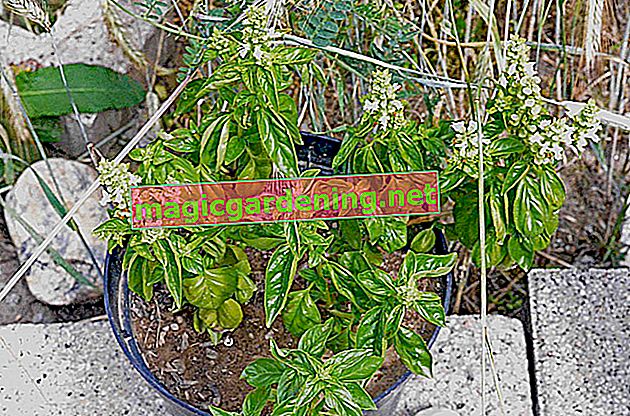 These were not headlines from the newspaper with the capital "B" at the beginning, but the headlines of articles in the magazine "test" from recent years. In the article from March 2017 it was possible to read: “Spring is here, but lamb's lettuce and rocket are currently still growing under glass or foil. We found a lot of nitrate in their leaves. In the test: 28 not ready-to-cook salads, including six organic products - ten chicory, nine lamb's lettuce and nine rocket. As far as pollution is concerned, two salads are very good, nine are only sufficient. We did not find any harmful residues of pesticides or chlorate. Pleasingly low in pollutants: chicory. "(Quote from the online portal Stiftung Warentest)

It even grows almost by itself and without any elaborate equipment, either in the garden or even in the pot, so that we don't have to do without broccoli, coriander, kale or the particularly popular Asian salads, even in a blazing frost. But which species actually belong to the winter vegetable diversity in our geographical latitudes? In addition, we took a look around our Austrian neighbors. Wolfgang Palme from the Höhere Bundeslehr- und Forschungsanstalt in Vienna gave some suggestions on the variety of varieties in his latest book "Harvesting fresh vegetables in winter":

The pick salads are particularly popular with gourmets

We have already reported on this popular leafy vegetable with its different flavors and cultivated forms in another article. But what about the cultivation of these salads, which are externally marked in such a way that they do not have a head, but grow green, red or yellow and in leaf form on our beds? Similar to the popular head lettuce and romaine lettuce, in this country they can be planted outdoors without hesitation until the end of October so that strong roots can develop before the stronger frosts. As with the other winter salads, it is growth-promoting to cover them with a film, which, however, does not primarily serve as frost protection, but rather to keep wind and rain away from the sensitive plants.

Other varieties that are ideally suited for winter cultivation and will become excellent suppliers of vitamins well into the new year are asparagus salad, romaine lettuce, lettuce (down to -10 ° C) and the extremely fast-growing multileaf salads.