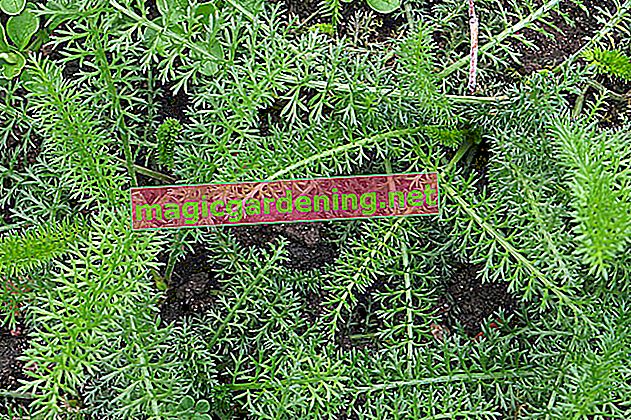 The following are described in more detail:

The large nettle can reach a height of 1.50 meters. You can recognize them by the roughly toothed leaves that taper towards the front. The stinging hairs sit on the stem and leaves, which leave burning pain and red wheals on the skin when touched. The flowers are quite inconspicuous. They are yellowish in color and hang down in small panicles from the uppermost leaf stands.

Nettle leaves are edible and, when dried, make an aromatic, diuretic tea. The plant is also important in organic horticulture as the basis for liquid fertilizers and sprays.

In the garden, it is primarily the field thistle that causes displeasure. It initially forms a rosette directly on the ground, which partially shows bays and is reinforced with spikes at the edge. A rather thick stem grows out of this. The flower is hemispherical and consists of many purple single flowers.

Once in the garden, the prickly weeds spread through sprouts that grow out of the main root. Thistles are true survivors; a new shoot can even sprout from a section of root that is only half a centimeter long.

This large-leaved foliage plant drives many gardeners to despair. It grows so stubbornly that it is difficult to get rid of. Giersch is a white flowering, ground covering herb with large leaves that are double tridentate. It can reach heights of up to one meter.

Giersch is likely to have been on the menu as early as the Stone Age. It can be prepared like spinach or consumed raw.

Ragwort first grows a rosette of leaves in spring, from which the pinnately split leaves unfold. The yellow flowers on tall stems appear between June and August. The plant grows to a height of between 30 and 100 centimeters.

The ragwort is highly toxic to the liver and is therefore one of the poisonous weeds. The poisoning cannot be treated to this day. In an ecologically compatible manner, you should dig up the ragwort and dispose of it in the household waste.

Probably everyone has already started looking for the lucky four-leaf clover. Clover is even grown as a valuable forage crop. But it also spreads unintentionally on lawns. For this reason, clover is one of the weeds for many garden owners.

Typically the leaves are tripartite. The clover has white or pink flowers between May and September. Clover blossoms contain a lot of nectar and are a valuable bee pasture.

As a yellow flowering weed that likes to spread out in the lawn and is very robust, the dandelion will please children at best. As soon as the snow has thawed, it stretches its serrated, elongated leaves out of the earth in the form of a rosette. From this the bright yellow flower develops, which changes within a few weeks into a "dandelion" from which numerous small umbrellas are carried away by the wind.

Mosses are among the oldest plants on earth. They can live for several thousand years. The green carpets are flowerless spore plants that reproduce through the so-called generation change. You won't find any roots in mosses. They hold on to the ground with rhizoids (cell threads).

Mosses can be divided into three different types:

They prefer locations in the garden that can hardly be reached by sunlight. The most effective way of combating moss is therefore to thin out large plants. Also make sure that the floor is ventilated, this will take away the livelihood of the green pillows.

Initially cultivated in botanical gardens, the plant has grown wild and is now one of the weeds that are spreading more and more in the gardens. It is adorned with strong runners and blue flowers that show a white throat. It has small, toothed, round leaves that grow opposite. The Persian Speedwell forms strong cushions in the lawn and reaches a height of ten to forty centimeters. The Persian speedwell is a reliable clay pointer.

The thorn apple has only appeared increasingly as a weed in the last few decades. Like the ground elder, it is one of the two-leaved weeds. It has large leaves that are long stalked and lobed to a point. The trumpet blossoms stand upright in the forks of branches. They form densely prickly, walnut-sized capsules in which the almost black seeds are located.

Warning: the entire plant is poisonous!

This wild plant grows up to sixty centimeters. It has strongly pinnate leaves, which consist of three to four pairs of leaves and forms numerous delicate purple flowers with four petals.

The shoots of these plants are up to three meters long. They always wind their way clockwise up everything that offers support. If the bindweed cannot find a climbing aid, it will thrive like a herb that covers the ground. The leaves are arrow-shaped and grow alternately. From June the bindweed blooms with large, white, odorless funnel-shaped flowers.

Large pink flowers are the hallmark of the bindweed, which is increasingly spreading as a weed in gardens. Both species can become a real nuisance because they are very vigorous and tend to strangle other plants.

When you destroy weeds, please consider that these plants enjoy a high value in the natural cycle and that insects serve as valuable food. In addition, weeds are bio-indicators that show the nutrient content and even the pH value of the soil. Therefore, it is preferable to use manual labor to combat unwanted plants and avoid the chemical club, as this almost always affects the sensitive ecosystem.