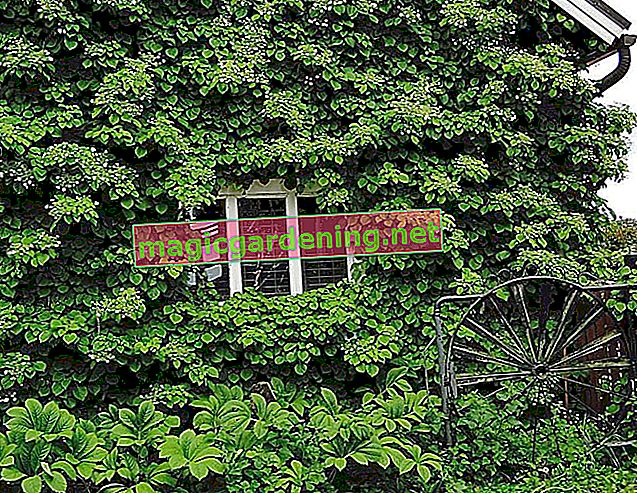 Like many hydrangea plants, the climbing hydrangea also comes from East Asia. In Korea, Japan and Taiwan, the species is widespread in the wild both in gardens and in the vast forests. In Europe and America, the vigorous climbing plant is used as an ornamental plant, but due to its robustness it has now also been released into the wild.

As a classic climbing plant, Hydrangea petiolaris climbs house walls, fences, walls, old and dead trees, pergolas and other trellises. To do this, the plant uses its adhesive roots, with the help of which it climbs independently and anchors itself to the ground. Climbing aids such as cords, hooks etc. are only useful for freshly planted young plants so that they can find the right path. If the plant is unable to climb, it can also grow - depending on the variety - as a ground cover or as a broad, hemispherical shrub up to two meters high.

On the side facing away from the light, the shoots of the climbing hydrangea form strong adherent roots that lignify over time and develop into thick branches. Older plants typically have a very gnarled habit, and the red-brown bark flakes off the thick wood. On walls, walls or trellises, climbing hydrangeas reach an average height of between six and seven meters, but in exceptional cases they can also be up to 15 meters high. In young plants, growth is comparatively slow at around 15 to 20 centimeters per year, but increases with age to annual increases of up to 40 centimeters - provided that the site conditions are optimal.

The dense foliage of the climbing hydrangea consists of numerous glossy green, round to egg-shaped leaves up to ten centimeters long. These sit opposite to each other on long stems and turn wonderfully yellow in autumn for most varieties. However, some of the newer varieties no longer develop autumn colors, but at least remain green on the shoots until next spring, at least in mild winters.

The large, umbrella-shaped flowers appearing between May and July are always creamy white on climbing hydrangeas. They give off a light, sweet scent that makes the plant irresistible to bees, bumblebees and butterflies. Due to their abundance of nectar, climbing hydrangeas are valuable insect food plants.

Incidentally, the flat panicles up to 25 centimeters wide consist largely of white, sterile flower blossoms. Only the inner petals - recognizable by the missing petals - are fertile.

If you want to enjoy the abundant flowering of these plants, you need patience: Climbing hydrangeas bloom at the earliest five to eight years after planting.

The wild forms of the climbing hydrangea develop small, inconspicuous capsule fruits until autumn. However, the development of seeds containing fruits is not to be expected in cultivated forms.

Like all hydrangeas, the climbing hydrangea is also considered to be slightly poisonous. All parts of the plant contain toxins such as glycosides (hydrocyanic acid), saponins, as well as hydrangenol and hydrangin. If larger amounts are ingested, these cause mild symptoms of poisoning, such as dizziness and nausea. However, leaves, flowers and other parts of the plant taste extremely bitter, so children will hardly be tempted to taste more. Rub a fresh leaf between your fingers and you will notice the slight smell of bitter almonds.

Furthermore, the ingredients of climbing hydrangea can trigger a contact allergy in sensitive people, but this can be avoided by using gloves and other protective clothing (e.g. when pruning the plant).

On the other hand, pets are more problematic, because climbing hydrangeas are poisonous for cats, dogs and the like and can cause severe symptoms of poisoning.

Climbing hydrangeas feel most comfortable in bright, but not fully sunny and warm locations. Choose a partially shaded, lightly shaded or shady place, which, however, must not be directly shaded - if it is too dark for the plant, it will not develop any flowers. A rather damp and cool location in the garden is also ideal.

Ideally, the potting soil is humic, fresh, permeable and slightly acidic. Climbing hydrangeas do not tolerate calcareous soil and are also very sensitive to heavy and compacted soils.

Place the climbing hydrangea in a well-silted planting hole that is about twice as wide and deep as the root ball of the plant. Loosen the side walls and the perforated base with a digging fork to make it easier for the roots to grow. Mix the excavated material with ripe compost, horn shavings (€ 6.39 at Amazon *) and, if necessary, rhododendron soil. Attach the shoots of the young plant to a climbing aid to point it in the right direction. Especially with house walls, make sure to use a trellis and attach it about ten centimeters in front of the wall. The strong, adhesive roots of the climbing hydrangea have a habit of digging themselves into the plaster and finding support there. Of course, a climbing aid is only necessary if the plant is to be trained to climb.Otherwise it just grows as a ground cover or broad bush.

Then cover the soil with a mulch material such as leaves, bark mulch etc. to keep the moisture in the soil. At best, put the root ball in a bucket with lukewarm water before inserting it so that the plant can soak up a lot of moisture.

The best time to plant a climbing hydrangea is early spring between March and April. However, the plants are mostly available as container goods, which can basically be planted all year round. The only requirement is frost-free, mild weather. Avoid planting on hot, sunny days, as otherwise the plants quickly come under water shortage and drought stress.

Climbing hydrangeas can be up to five meters wide and accordingly need a lot of space. You should therefore plant them individually and avoid underplanting them - the resulting root pressure does not please the plants. However, it is possible to socialize with other climbing plants such as the clematis.

Basically, the additional watering of planted climbing hydrangeas is not necessary, as the plants take care of themselves through their widely branched root system. Only freshly planted specimens should be watered for a few weeks, as the roots, which are not yet firmly anchored in the ground, cannot absorb sufficient moisture themselves. Even during dry and hot midsummer phases, watering must be done occasionally if necessary - for example because the plant is hanging its leaves.

Climbing hydrangeas have a very high nutritional requirement and should therefore be supplied with organic fertilizer in spring. Compost, lawn clippings or bark mulch are particularly suitable for this.

If older plants do not really want to bloom, a start-up fertilization with commercially available hydrangea or rhododendron fertilizer can help.

If they have enough space to spread out, climbing hydrangeas do not need to be cut. However, the plants are quite compatible with pruning and can easily be cut back into the perennial wood. Young climbing hydrangeas branch out more strongly and then grow more densely if they are shortened by a third immediately after planting.

If possible, pruning measures should be carried out before budding on a frost-free and mild day in February or March.

Since mostly no seed-containing fruits are formed, only vegetative propagation via cuttings, cuttings or cuttings is possible.

In June, cut head cuttings about ten to fifteen centimeters long, for which you will choose shoots without flowers. Remove the lower leaves and dip the beveled cut in a rooting powder. Then plant the cuttings in small pots with growing substrate (9.05 € on Amazon *) or directly at the desired location and keep them slightly moist. The rooting is successful when the first new shoots form.

It is easier to propagate using cuttings which, unlike cuttings, are not immediately separated from the mother plant. In May or June, select young shoots that grow close to the ground, pull them down, remove the leaves and slightly scratch them in one place. You plant these in the ground, only slightly covering the shoot point with soil. However, the branch must be weighted down with a stone or anchored with a wire so that it does not slip out of the planting area. Keep the offshoot slightly moist and separate it from the mother plant in the following spring as soon as it develops its own shoots.

Cuttings are cut in winter and kept in the vegetable drawer of the refrigerator or another cool place, wrapped in a damp cloth, until they are planted in spring. Stick the 15 to 20 centimeter long pieces of wood directly to the intended location and keep the soil there slightly moist.

Climbing hydrangeas are sufficiently hardy and only need light winter protection in the first years of standing, for example by mulching with leaves or laid out spruce and fir branches.

In principle, climbing hydrangeas can be transplanted as long as they have not been in their place for more than five to six years. Moving older, climbing specimens, however, is almost impossible just because of the strong trunk formation. Only shrubby plants can change location later.

It is only important that you do not transplant the plants unprepared. In autumn, before the planned measure - which is best done in spring - dig a shallow trench around the main shoot, which you fill with compost. In this way you force the plant to form compact roots close to the trunk and make it easier for it to grow later in the new location.

If the planter is big enough, the climbing hydrangea can also be cultivated in a tub. In one of these, the plant will of course not get that big, but it can still reach considerable proportions. Therefore, it is rather unsuitable for keeping on the balcony, especially if it is a rental apartment. Many landlords prohibit the planting of climbing or climbing plants on the balcony, especially if the species are self-climbing. As a privacy screen on a terrace - e.g. planted in a raised bed box or similar and provided with a trellis - the climbing hydrangea is very suitable.

Pests are rarely found on climbing hydrangeas. If so, they are mostly sucking insects such as aphids. You will often notice an infestation by short stature, stunted leaves, falling buds or a noticeably strong appearance of ants around the infested plant. Prevent pest infestation through careful care, a suitable location and the settlement of beneficial insects in the garden. Install an insect hotel at a convenient location (€ 8.87 at Amazon *) and ensure that birds, for example, find enough places to retreat and find food.

Climbing hydrangeas are robust plants that are rarely attacked by diseases. If the plant looks sick, mistakes in care or an unsuitable location are usually the cause. Chlorosis often occurs, in which the leaves turn yellow. Reasons are either a lack of nutrients caused by incorrect or insufficient fertilization or an incorrect pH value. If this is more than 7, you should provide the climbing hydrangea with acidic rhododendron soil.

Powdery mildew also occurs occasionally, with powdery mildew being predominant in hot and dry weather and downy mildew in cool, damp summers. Spraying field horsetail or garlic brew helps against both fungal diseases, and severely infected leaves and shoots should be removed.

Climbing hydrangea does not bloom, what to do?

If the climbing hydrangea does not want to bloom, there can be various causes:

Wilting leaves are not only caused by a possible lack of water, but can also be due to waterlogging (and thus rotten roots) or a location that is too sunny.

These beautiful varieties of climbing hydrangea are suitable for home and hobby gardens: