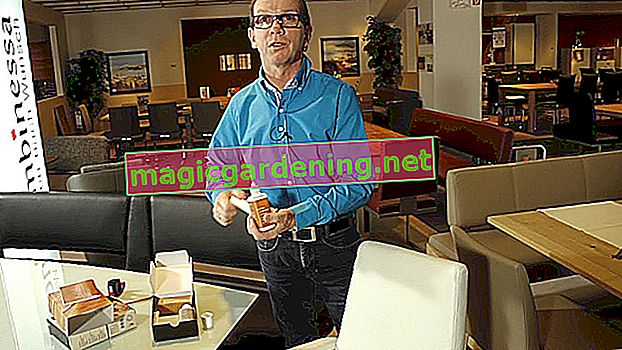 When do you need to remove ivy?

The shoots of ivy can cause significant damage to masonry. They get stuck in joints and holes and expand them.

Trees, even large old specimens, can be so crushed by the ivy that they die.

It can therefore make sense not to let ivy grow too much and to remove the tendrils from masonry and other plants.

What are the key elements in fighting ivy?

Ivy spreads via the shoots on which sticky roots develop. The adhesive roots are buried in everything that gives them support:

Even small remains of ivy quickly form new offshoots. If you want to permanently remove ivy, you need to ensure that all shoots, as well as roots, are carefully removed from the ground, walls or other sub-surface.

How to remove ivy as a ground cover

If the ivy has overgrown a larger area as a ground cover, it is best to start removing the plants from the edge. If possible, cut off any thicker shoots you can reach with secateurs or a small saw. Pull out the tendrils and make sure you get as many roots as possible.

When the area above ground is cleared of ivy, you need to get the roots out of the earth. If necessary, moisten the floor, as this will make the work easier.

Pierce the ground with a digging fork and lift up the earth. Often times, you can simply pull the roots out. With very old ivy plants, however, all that remains is to use a spade and dig up the roots.

Once the ivy has climbed walls and ceilings, the damage done can be considerable. In order not to make matters worse, you need to be careful. This is especially true if the ivy roots are buried in joints.

Moisten the wall with the ivy. Always start from above, carefully pulling the long tendrils out of the masonry. If thicker shoots cannot be pulled out, cut them into smaller pieces with secateurs. Then you need to dig up the roots of the ivy so that it does not sprout again.

Once the ivy has been removed from the wall, scrub it with a solution of detergent and water using a stiff brush. This not only serves the purpose of getting the masonry clean again, it also removes any remaining ivy root residues.

If a tree is overgrown with ivy, first check how healthy the tree is. If it cannot be saved anyway, you can save yourself the work.

To remove ivy from a tree, cut through all ivy shoots at a height of about 1.50 meters and pull them down. This is easier when the tree is damp. If necessary, you should spray it off with water beforehand. The upper tendrils can stay on the tree if they are not too thick and the roots have not penetrated the tree bark too much. These shoots dry up and then fall off.

Then you absolutely have to dig up all the roots of the ivy around the tree.

When the ivy population gets out of hand, many gardeners resort to chemicals like Roundup or Glyphosath. Even if it is easy to read on the packaging, these agents are not permanently effective and are not recommended because of their high toxicity to other plants.

With Roundup and other means you can achieve that the leaf masses on top die off and some of the small adherent roots are also destroyed. However, you will not reach deep roots with it. The ivy will sprout again, so after a while you will face the same problem again.

Protect hands and airways from ivy

Since ivy is poisonous and contact with bare skin can lead to skin inflammation, always work with gloves when removing ivy.

Even the smallest particles released during cutting can be harmful if they get into the airways. It is therefore advisable to wear a respirator when doing this work.

Never leave trimmings and roots of ivy lying around; dispose of them as soon as possible. Otherwise there is a risk of poisoning for pets. In addition, new adherent roots form on the cut shoots, which the ivy uses to spread again in the garden.