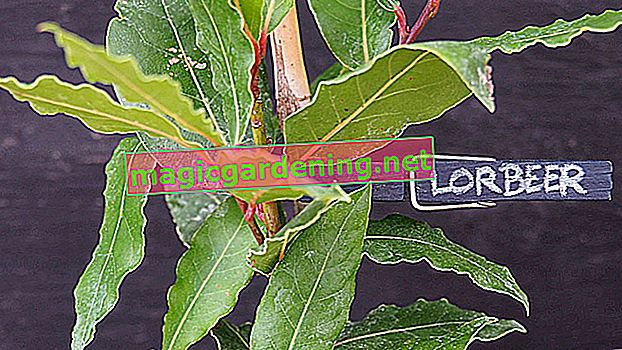 The origin of the laurel tree

The real laurel originally comes from the Middle East, but has been known as a medicinal and aromatic plant throughout the Mediterranean since ancient times. A laurel bush planted in the ground can withstand sub-zero temperatures for a short period of time. However, year-round cultivation outdoors in Germany is only possible in very mild locations, such as around Lake Constance, and a certain amount of winter protection is necessary there too. Since the real laurel is often cultivated in pots, there is an even greater need to protect the roots from frost. After all, sensitive roots like those of the real bay laurel freeze to death in a planter even more easily than in the protected position in the garden soil.

The water supply should also be ensured outdoors

If you really want to dare to overwinter real laurel outdoors, then wrapping the plant in jute or special winter protective hoods is part of winter care. In general, locations in front of sunny house walls or on south-facing balconies are to be preferred, as it is easier for the substrate to thaw in between and thus a water supply for the roots.

Wintering in the house

True laurel is sensitive to frost, but the following rooms are more suitable as winter quarters than the windowsill in the room:

Real laurel can withstand temperatures between zero and eight degrees Celsius in winter better than the usual room temperature.