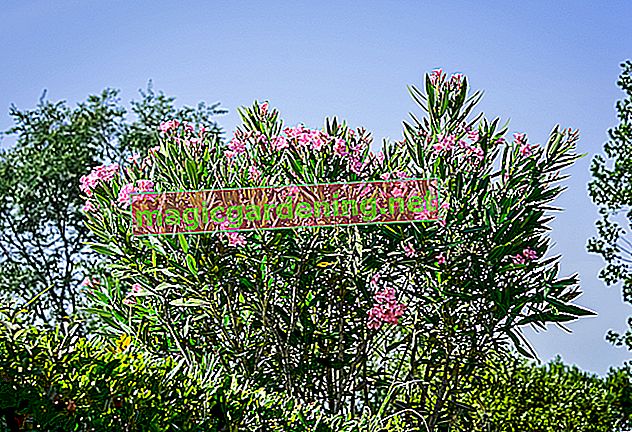 Fertilize oleanders during the growing season

During the winter months, the oleander must be watered, but not fertilized: The evergreen plant needs a break in the cold season and should therefore be overwintered as cool as possible. Start the regular fertilization at the beginning of the growing season in March and continue it until the middle, but no later than the end of August. Thereafter, the oleander should no longer be supplied with nutrients so that the shoots can mature in good time before the winter break - this gives the plant, which is only winter-resistant up to around minus five degrees Celsius, a certain protection against cold temperatures. After all, oleanders should be moved to their winter quarters as late as possible.

Potash fertilizers and lime are also good for oleanders

You can also increase winter hardiness by adding potash fertilizer to the oleander between mid and late August. This supports the shoots in the timely maturation, but must not be used later than specified. Otherwise it can no longer develop its effectiveness. In spring, too, it makes sense to add potash fertilizer and fertilizer lime at the beginning of the growing season, especially if you fertilize with long-term fertilizers.

Which fertilizer is suitable for oleander?

Oleander can be effectively supplied with a variety of fertilizers and tolerates both mineral and organic substances very well.

For the forgetful: slow release fertilizer lasts a long time

If you are forgetful or just want to be on the safe side, you can provide your oleander with a slow-release fertilizer for flowering plants at the beginning of the growing season. Various remedies are available on the market that cover three, four, six or even twelve months. Fertilize the oleander at the beginning of the season and work the fertilizer carefully into the substrate. You then have rest for the specified period of time, and over-fertilization is difficult due to the very slowly released nutrients. Even after or during repotting, the oleander should be supplied with a long-term fertilizer.

Alternatively, of course, fertilization with a mineral flowering plant or a special oleander fertilizer is also possible, but this - depending on the agent used - should be carried out once or twice a week. It is best to use a liquid fertilizer that you can administer together with the irrigation water. This has the advantage that it can reach the roots more quickly and be better absorbed.

If you like it more natural, you can of course also use natural fertilizers such as compost, manure and horn shavings (€ 6.39 at Amazon *). These fertilizers also release their nutrients very slowly, so that overfertilization is practically impossible. Provide your oleander in early spring and early summer with organic fertilizer, which is thoroughly worked into the substrate. Even when repotting (this should be done in early spring if possible!) The plant substrate can be enriched with compost and horn shavings (€ 6.39 at Amazon *).

Extra tip: fertilize the oleander with tea or coffee grounds

A very special as well as particularly cheap insider tip for fertilizing strongly consuming plants such as oleander is the use of tea or coffee grounds. Coffee grounds in particular contain a lot of valuable nutrients and are valuable fertilizers, which in many households are also obtained free of charge - and are usually thrown away. You can use coffee grounds fresh, but you can also dry them and then store them in an airtight container for the next use.

Fertilization with blue grain is also possible with oleander, many hobby gardeners have had very good experiences with it. However, the very nitrogenous blue grain can quickly become over-fertilized, which stimulates the shoot growth immensely, but hardly any flowers are formed - too much nitrogen in the fertilizer is poison for a rich flowering. When dosed correctly (be sure to follow the instructions!), You can't go wrong with Blaukorn. If you want to be on the safe side, you can also fertilize your oleander with compost at the beginning of the growing season - this ensures a balanced mineral balance.

Above all, yellow leaves are sure signs of insufficient fertilization - especially if the oleander not only has isolated yellow leaves, but a large number of leaves turn yellow within a short period of time. Isolated yellow leaves are normal, however, as this is a natural aging of the leaves. A meager bloom or stunted blooms can indicate a nutritional deficiency, often in combination with fungal or bacterial diseases.

With mineral fertilizers in particular, you should strictly follow the manufacturer's dosage instructions in order to avoid over-fertilization. However, if you mean it too well, it is not necessarily fatal. Pay attention to the leaf edges: If they become brown and dry, you should reduce the amount and / or frequency of fertilization or switch to another fertilizer. These leaf margin necrosis unfortunately remain visible for a very long time.