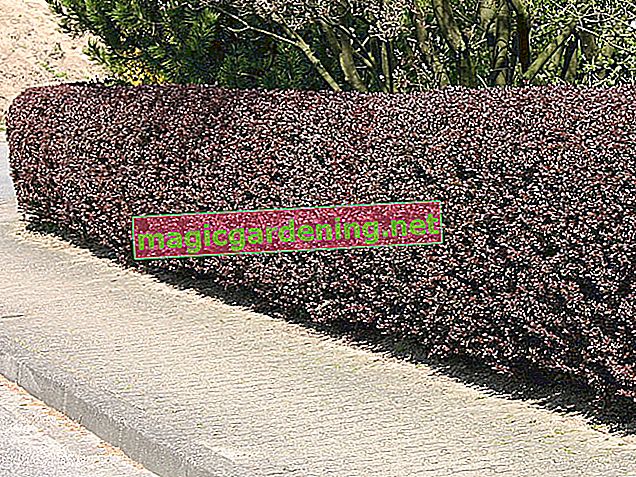 The gloss medlars represent a genus with the Latin name Photinia. The generic name is derived from the Greek word “photeinos”, which indicates the glossy leaves. They belong to the rose family and contain around 66 species, whose original range is in Asia and North America. Here they grow in the warm parts of the mountain regions. Most of the species within the genus are evergreen shrubs that keep their leaves through winter. With the start of the new growing season in spring, the species produce fresh leaves.

Medlars are closely related to hawthorn, firethorn or dwarf medlars. There is a kinship with the apple trees. All species have in common that they develop pome fruits. The fruits of the medallion are reminiscent of miniature forms of apples. They consist of the fleshy thickened flower axis, which grows together with the carpels. The fruits turn red or blue when they ripen and stay on the bush until winter.

One of the evergreen shrubs is the red-leaved medlar (Photinia × fraseri), which is also known as Fraser's medlar. This medlar is the result of crossing the Japanese medlar (Photinia glabra) and the saw-leaved medlar (Photinia serratifolia). The history of this cultivation goes back to 1943 when it was discovered in an American tree nursery in Alabama and spread around the world. Since then, different varieties have been bred from this hybrid.

Varieties of the red-leaved loquat:

The 'Red Robin' variety is a popular ornamental shrub, which is known colloquially under the name of the loquat. While this variety reaches heights of up to two meters, 'Little Red Robin' forms lower shrubs. The variety grows 120 centimeters high and 120 centimeters wide. It is characterized by good cut tolerance and is suitable for planting pots. Two plants per meter are enough to create a dense hedge.

The cultivar 'Camilvy' is an improved cultivated form, the leaf shoots are colored more intensely red than the fresh leaves of 'Red Robin'. The growth of this variety is strong and well branched. The branches grow loose and broadly bushy. Their growth per year is 50 centimeters. It reaches heights of growth of up to 300 centimeters and is frost hardy up to a temperature of -23 degrees Celsius. It sprouts again after winter. Especially long-lasting minus temperatures over several months can damage the plant.

The variety 'Robusta Compacta' is a small-stature form that is well hardy. It reaches heights of between 120 and 180 meters and can reach heights of over two meters if the site conditions are good. It has finer leaves than 'Red Robin' and has less annual growth compared to this popular variety. Their compact growth makes them ideal woody plants for planting pots that decorate terraces and balconies.

'Indian Princess' is one of the compact varieties. 'Birmingham' forms tough leaves that are leathery to the touch. 'Pink Marble' is suitable as a solitary wood because it develops three-colored foliage with pink, white and green shades. The shape of the leaves of 'Curly Fantasy' is striking. They are developed in a wave-like manner and have roughly toothed edges.

The freshly sprouting leaves in spring are colored dark red and form an aesthetic contrast to the shiny dark green leaves of previous years. The leaves keep their bright red color for up to four months before turning green. Lanterns can be planted alone or combined with other shrubs such as cherry laurel, jasmine or forsythia. Cultivation as a container plant is possible.

Many varieties have a high growth rate, which is why they are well suited for hedging. After two to three years, 'Red Robin' forms a compact hedge with opaque branches. Regular pruning can encourage branching. The evergreen branches are a popular Christmas decoration for wreaths and bouquets.

The evergreen species prefer a partially shaded location. Although they thrive in sunny places, direct sunlight often causes leaf damage. Evaporation increases, which leads to a higher demand for water. A lack of water results in drought stress, which manifests itself in the form of brown leaves. A sheltered location is important for the evergreen plants, as dry and hot summer winds can also lead to increased water loss.

The shrubs like a well-drained substrate because they are sensitive to waterlogging. The soil should be moderately dry and rich in nutrients. The pH value plays a subordinate role because the medlars are adaptable.