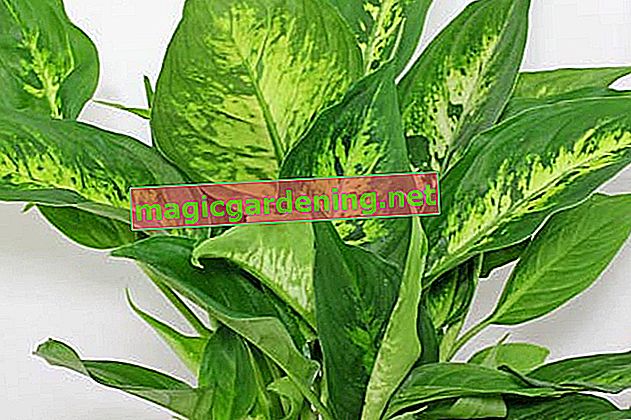 Dieffenbachia originally come from the so-called Neotropic, an area that extends over large parts of South and Central America as well as the West Indies. The different types of Dieffenbachia occur mainly between Costa Rica and Colombia. Their original habitat is therefore a tropical, humid one, which of course makes outdoor culture impossible in our latitudes. On the other hand, Dieffenbachia get along well with being kept in a pot in a heated room all year round.

The plant genus got its name from Joseph Dieffenbach, the long-time head gardener of the Vienna Imperial Palace Gardens Schönbrunn. The Austrian botanist Heinrich Wilhelm Schott is giving him a grateful monument.

The key data again at a glance:

Dieffenbachia belong to the arum family, grow as evergreen shrubs and take on a shrubby shape. They have a thick stem that, when the plant grows outdoors, can easily lie down thanks to the large, heavy leaves. The stem remains unbranched, so the leaves are attached directly to it, but thanks to their large-area shape they still form an impressive overall volume.

In the Dieffenbachia, as already emphasized, the leaves are the most important part of the plant from an ornamental or gardening perspective. They have a generous, ovate to lanceolate leaf blade and are alternate on the stem.

They are particularly decorative due to the variegation that many varieties show. This can be structured in different ways - sometimes speckled, sometimes with two-dimensional interior drawing or fine striped patterns in creamy white. The green base color of the leaves varies from variety to variety from deep, deep dark green to light green tones.

The leaf characteristics of Dieffenbachia:

The flowering of Dieffenbachia is of secondary importance in aesthetic terms. In addition, it is actually rarely produced. It has a piston shape typical of arum plants with a tightly enveloping bract, the spathe. In terms of color, both the cobs and the spathe do not stand out particularly, but appear in a simple light green to creamy white. The Dieffenbachia takes a lot of energy to produce the flower. So if you want to keep them in the room permanently for decorative purposes, consider cutting off the flower.

The most important thing about the Dieffenbachia flower:

According to their tropical home, Dieffenbachia need a lot of warmth above all. Your comfort zone is slightly above the temperature that most people find comfortable in their home - hardly anyone would want to live permanently at 26-30 ° C. The Dieffenbachia can also thrive well at a temperature of 21 ° C or more - here you can meet up with it for a long-term shared apartment.

The highest possible humidity is also important for the Dieffenbachia - after all, it comes from the rainforest. It is best to pamper them regularly with a spray shower, especially during the winter heating season. It is also a good idea to put them in the bathroom, where the humidity is higher than in the living room or bedroom. You should protect the plant from drafts as much as possible.

You should also give your Dieffenbachia plenty of light. However, like some other rainforest plants, it does not tolerate full sun well. A light window seat is best for you, even in winter it should not be dark. However, it should be a bit cooler because of the inevitably lower light supply, around 15 to 18 ° C.

The location rules at a glance:

Dieffenbachia do not need a particularly complicated substrate. It is best to use a peaty soil mix to which you add some compost. To prevent waterlogging, you should add some expanded clay to the lower part (€ 17.50 at Amazon *).

You should water the Dieffenbachia regularly and relatively much. The root ball must also not get waterlogged, otherwise it can rot. So keep it evenly moist, but not wet. To prevent long-term damage, if the root ball has been standing in the wet for too long, take it out of the pot and wrap it in newspaper until it has dried off. There is a little less watering in winter than in summer.

The Dieffenbachia also needs a lot of moisture from the air. So spray it every now and then with the disperser and make it look like a pleasantly gentle, tropical precipitation.

The nutritional requirements of Dieffenbachia are moderate. To promote fresh, vital growth, especially with regular topiary, you can mix some liquid fertilizer into the irrigation water during the main vegetation phase - but not more than once every two weeks. The fertilizer application is stopped in autumn.

A Dieffenbachia in indoor culture can withstand one or the other radical pruning - because with increasing age it can bald in the lower part of the stem, which does not look nice. In spring, perhaps parallel to repotting, you can cut back a specimen that has lost a lot of leaves in the lower part to about 10 to 20 cm. To do this, use a sharp knife and, of course, gloves.

You can also give your Dieffenbachie a regular topiary. To do this, shorten the upper shoots each over a slightly arched, sleeping eye. Here it can then sprout again in a controlled manner.

The Dieffenbachia species have different growth rates - but in general they do not grow too quickly and only need to be repotted every 2 years, in the case of older specimens only every 4 years. The new pot should not be disproportionately larger than the old one. Important: because of the toxicity of the plant, wear gloves when repotting,

You can reproduce Dieffenbachia very easily and in different ways.

The simplest method is to cut head or stem cuttings. A head cutting can easily be rooted in a water glass. For trunk cuttings, cut about 5 cm long pieces from the trunk and place them with the long cut side on a soil substrate. It is beneficial to put them on under foil in a protected, evenly moist microclimate. For both methods, the warmest possible basic temperature of at least 22 ° C applies.

A third method is division. These are best used when repotting is due anyway. Cut off a piece of the rhizome root ball together with the mature above-ground plant part and place it in its own pot. Growing works best in spring, when the light supply increases.

The propagation methods at a glance:

As with all handling of Dieffenbachia, it is important to remember the toxicity of the plant when it comes to propagation: when cutting cuttings and especially when dividing roots, you should definitely wear gloves!

The best way to create offshoots for expanding your Dieffenbachia collection or for gardeners friends is using the cutting methods.

Dieffenbachia are moderately susceptible to diseases and pests. What is most likely to affect the plant are unsuitable environmental conditions and care errors, such as excessively dry or drafty air, waterlogging or full sunlight.

The following parasites in particular can appear on pests:

The Dieffenbachia can easily get spider mites in dry air. Combating them also serves to correct the trigger: Because the parasites can best be killed off with water - first simply by rinsing them off, then with a moist, permanent climate under foil.

If the Dieffenbachia is very damp, fungus gnats can be attracted and settle in the soil. If there is an infestation, you can let the root ball dry off for a short time. At the same time, you can reduce the number of fungus gnats with sticky yellow boards.

You should also regularly check your Dieffenbachia for scale insects. They are difficult to see with the naked eye. If the infestation is weak, you can simply wipe it off the leaves with a damp cloth or shower under the water jet. With a larger population, a spray mixture with garlic or nettle is suitable.

The Dieffenbachia can also attack the mealybugs. You can easily recognize them by the woolly webs that they attach to the leaves. They can best be combated with a mixture of one liter of water, 15 milliliters of alcohol and 15 milliliters of curd soap.

Brown leaves usually indicate drought. If the Dieffenbachia has been dry for a long time or the air is not humid enough, you should change that quickly. Water regularly and give the plant a hydrating mist shower every now and then.

Brown spots on the leaves of Dieffenbachia are mostly sun damage. Did the plant stand longer in the full sun? Then you should change your location. Heating air that is too dry can also lead to dry, brown areas.

One of the unpleasant things about Dieffenbachia is its toxicity. And this is not insignificant. If you have toddlers, cats or dogs in your household, it would be better to avoid the plant. As a consolation, there are a few other beautiful ornamental foliage houseplants, such as the golden fruit palm, that are suitable as alternatives.

The fact is that all parts of the Dieffenbachie contain highly toxic substances, especially alkaloids, oxalic acid, saponins and pungent substances. Even 3-4 grams of the leaves are considered a lethal dose for adult humans alone.

Reactions to oral ingestion are initially a burning sensation and severe swelling of the mucous membranes that is even dangerous to suffocation, followed by vomiting and diarrhea. The esophagus and stomach can suffer severe burns, cramps, impaired consciousness and paralysis can occur.

Measures in the event of a “Dieffenbachia accident” are the administration of medical charcoal and cortisone spray against inflammation and swelling. Above all, you should alert the toxicological emergency service immediately.

Rubber gloves should always be worn when handling the Dieffenbachia, i.e. when cutting and repotting.

Do you work in an area where you are more exposed to gasoline exhaust fumes or fumes from composite materials? Imagine a Dieffenbachia in the office! (If you can offer her suitable conditions there). Dieffenbachia belong to the particularly air-purifying plants which, in addition to carbon dioxide, also absorb benzene, formaldehyde and trichloroethene to a large extent. So you can protect your health in the long term and, above all, reduce the risk of cancer.

Most Dieffenbachia varieties are hybrids that differ little from one another in terms of care requirements.

This variety is the most common ornamental form and can be recognized by its dark, broad, cream-colored variegated leaves about 25 cm long and with pointed tips. The Dieffenbachia maculata becomes about 60 cm to one meter high and with this moderate size is very well suited for indoor culture.

This species, which originates from Peru, is, as its name suggests, a particularly large one: it reaches a height of about one meter to room height and a relatively expansive width. Its leaves are characterized by a pretty sprekel structure in a yellowish tone on dark green. The leaves are also quite large, up to 60 cm long and around 30 cm wide.

In contrast to Dieffenbachia imperialis, Dieffenbachia exotica is a very small variety. Its leaves are only about 25 cm long and 10 cm wide and are oval-shaped. Their variegation is quite flat, spotted irregularly and shows itself in yellowish tones. With its leaf structure and compact size, it is a very attractive and recommendable variety.

This variety is a bit larger again - like the Dieffenbachia imperialis, its leaves can reach a length of up to 60 centimeters. They are elliptical in shape and have a deep green base color. They are adorned by a blotchy variegation in light green.

Dieffenbachia bausei also shows a pretty structure of spots on the leaves - albeit in a slightly different color combination: The basic color of the leaves is more yellowish green, while the variegation is dark green. The leaf margins are also marked by a dark green border, which gives them an additional, finely defined structure. In terms of size, the leaves of Dieffenbachia bausei are somewhat smaller than those of Dieffenbachia bowmannii and are lanceolate. They reach about 35 cm in length and up to 15 cm in width.