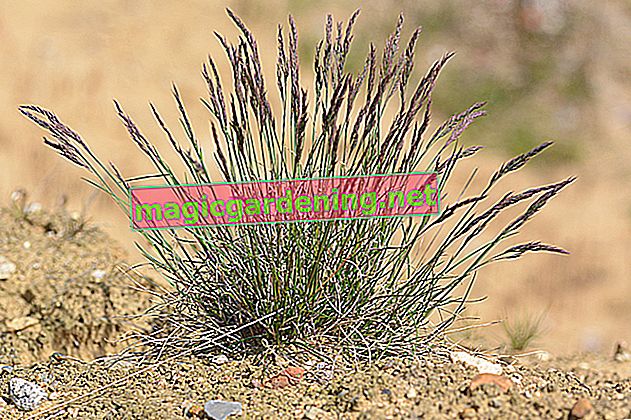 Sweet grasses - a family of plants with innumerable species

The sweet grasses represent one of the large plant families. There are more than 12,000 species worldwide, which are divided into around 780 genera. These include both perennial and annual species.

Not only the plants commonly referred to as grasses belong to the sweet grass group. The list also includes species that don't look like grass at first glance.

Grasses grow in very different locations such as forests, meadows and even in deserts. They occur on steppes, meadows and savannahs as well as on dunes and are often vegetation-defining there.

Examples of sweet grasses in the garden

Depending on the species, sweet grasses are between ten centimeters and four meters high. The dwarf grass belongs to the small-stature species. The bamboo, on the other hand, grows up to four meters high, and at first glance doesn't look like a sweet grass.

The list of grasses that are often grown in the garden includes:

Cultivation of sweet grasses as a useful plant

Many of our staple foods are sweet grasses. All types of grain such as rye, wheat, oats, corn, millet and even rice are types of sweet grass.

There are other subspecies within the various species. About 27 different types of oats are known. By contrast, there are only six types of rye.

Incidentally, grain is not only grown as food. The stalks are also cut to serve as animal feed. In many regions of the world the leaves are used as building material or as a material for kitchen utensils and clothing.

To tell the difference between sweet grasses and sour grasses, look at the stems. Sweet grasses stand out because of their raised knots, which the sour grasses lack. In addition, sweetgrass stems are slightly triangular and contain pith.