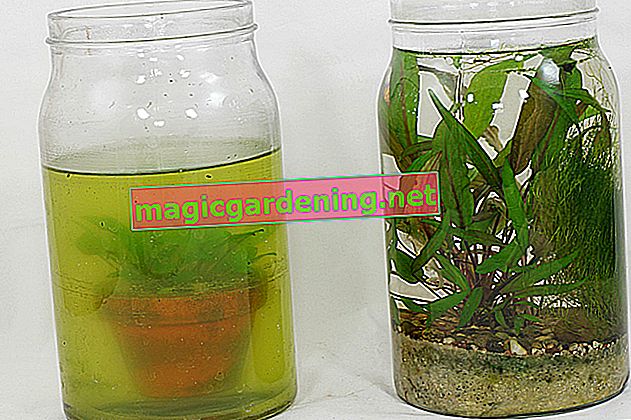 Bladder snails represent a family within the aquatic pulmonary snail. There are around 80 species worldwide, three of which are native to Central Europe and one was introduced from North America. In the aquarium hobby, bladder snails are spontaneous accompanying fauna that are brought in by new aquatic plants, decorations or fresh soil. From a biological point of view, they are an enrichment for the ecosystem because they break down organic substances faster.

Bladder snails have a transparent and shiny housing with a smooth surface and can reach a size of up to 12 millimeters. Most of the time, however, they remain significantly smaller. The snail shell is always left-handed and tapered to a point or blunt. Through this bulbous, horn-colored housing, the light, dotted jacket fabric is clearly visible. Bladder snails appear dotted with golden bubbles, which is what earned them their name. Despite the small wall thickness, the snail shell is comparatively stable.

This is how bladder snails breathe

Bladder snails have a bubble of air that they always carry with them in their shell. This oxygen reserve is occasionally topped up on the surface of the water. The lung function is taken over by the adjacent mantle tissue, which has a strong blood supply. Species like the pointed bladder snail have a finger-shaped rim that protrudes beyond the edge of the shell and functions as a secondary gill. With this organ, the bladder snail can also absorb oxygen from the water.

The snails can reach considerable speeds in the water. You only need ten seconds for one centimeter. They leave a thin film of mucus that is secreted by a gland and coats the floor. When the snails slide through the water without contact with the bottom, they pull the slime behind them in a thread-like manner. These almost invisible threads can expand into a complex system of traces when the water current is low. The snails can cling to these threads and return to the starting point. Land snails can withdraw into their housing in case of danger and close it with a lid. Bladder snails do not have such a closure and must protect themselves in other ways. They are able to expel air from their respiratory system. This makes the snail heavier than the water and quickly sinks to the bottom of the water, where it is safe from predators.

The small bladder snail is one of the freshwater inhabitants that breathe with the help of a lung. Their gills have receded so that the animals can only take in oxygen from the air. Therefore, bladder snails crawl to the surface of the water. Mud snails, sometimes mistaken for bladder snails, and ramshorn snails also breathe this way.

Bladder snails in the aquarium

Often bladder snails get into the aquarium through purchased aquatic plants, where they multiply quickly under optimal conditions. Contrary to what is often assumed, the species are completely harmless and can be grown together with different organisms. Bladder snails are not a threat to shrimp and fish. However, some shrimp eat the bladder snail spawn.

Bladder snails cannot ensure that the aquarium remains completely free of algae. Nevertheless, they are a valuable aid in cleaning. They maintain the water quality by controlling the algae population. They eat fish excrement and leftover fish food that has sunk to the bottom.

The bladder snail thus deprives many bacteria of an important basis of life and thus reduces the germ density in the water. The immune system of the fish has to withstand a lower germ pressure so that the organisms can live in clean water.

Bladder snails are the underwater health police. They utilize both spoiled and half-digested leftovers.

Bladder snails are diurnal and nocturnal and are extremely adaptable. They can cope with both warm and cooler temperatures and also colonize polluted waters with a high pH value. The snails are hermaphroditic animals that do not necessarily need a partner to reproduce. Therefore, one introduced snail is enough to create a small population. Nothing is known about the life expectancy of a snail.

If enough conspecifics are available, the snails look for a mating partner. The individuals take on either the male or the female role. Often several animals can be seen mating in a long chain. During copulation, a snail crawls onto the partner's shell and everts the male sexual organ. The lower animal acts as a female. After a few minutes the act is complete and the female drives away the partner with beating movements of the housing.

Bladder snails lay their eggs in the form of elongated masses. This so-called spawning ball is slightly curved and feels soft and jelly-like under pressure. A bladder snail can produce anywhere from three to 40 spawning balls. They are deposited on parts of plants and left to their own devices. The eggs stand out as bright points from the mass, which consists of several levels. The spawn is almost invisible and can only be seen against a black background or when the light falls at an angle.

Embryonic development takes ten days at a water temperature of 24 degrees Celsius. The tiny juvenile snails usually leave the spawn after eight to 14 days to look for food. There is no parental brood care.

Bubble fish mainly feed on dead plant parts in the aquarium. They draw food from unused or half-digested residues of organic material, including fish excrement or sunken fish food. They do not eat higher plants, but rather eat the growth of lower plants such as diatoms and green algae. Your rasping tongue is unable to break down the tissue of healthy plants.

Of the 80 species worldwide, there are three that are native to Central Europe. These types can be distinguished from one another by their appearance. Often the water also gives clues about the species, whereby some bladder snails are adaptable and also tolerate suboptimal conditions.

There are some fish species such as puffer fish or paradise fish, which prefer to feed on snails. Zebra loaches and clown loaches are also known as snail eaters, and they attack snails and spawn. If you keep such fish, you can feed them from your own snail farm.

A five liter jar is a good place to start for breeding bladder snails. You can feed the animals with slices of cucumber and raw potatoes. Occasionally add a pinch of fish food to the water. Bladder snails like to take fish food tablets, which are actually intended for bottom fish. You can also throw dead flies into the water. This approach food is a protein-rich treat.

The water should be changed occasionally. Make sure that the water hardness is not too low. Tap water is usually sufficient. If you are unsure, you can crumble the shell of a chicken egg and add it to the water. If you set up the vessel in living rooms with normal room temperature, you do not have to add additional heating. However, temperatures between 22 and 25 degrees Celsius accelerate the reproduction and development of the larvae.

If bladder snails are reproducing intensely, it is a good idea to check the conditions. A strong population development indicates a high nutrient input. Too large amounts of fish food lead to uncontrolled reproduction, because the natural conditions are ideal for the bladder snail.

Feed more sparingly and make sure that no fish food sinks to the bottom. If you collect bladder snails from the aquarium, increasingly unused remains are left on the bottom

Bladder snails are used by parasitic flukes as intermediate hosts. The approximately one millimeter long zecaria of the genus Trichobilharzia spread over the duck droppings. The hatching larvae settle in the snails and presumably infect other hosts before the worms that live freely in the water burrow through the ducks' skin again.

The carnivorous species of snail is a useful aquarium dweller that lives in both soft and hard water. With its striped housing, the species is a visual enrichment. The animals are of separate sexes and are less prone to mass reproduction. After the bladder snails have been eradicated, you can feed them fish food.

The species come from the tropics, where they live in swampy waters. They prefer a water temperature of 18 to 28 degrees Celsius. Apple snails use the spawn of other snails as a source of protein and do not stop at living snails when there are deficiency symptoms, even though their diet is predominantly vegetable.

Sometimes it is necessary to use copper-containing drugs against flukes, parasites or planarians. In large quantities, copper kills the bladder snails. However, low concentrations are not bad and even beneficial, because the snails need copper as a trace element. Plant fertilizers that contain copper are harmless in most cases.

Keep away from being attacked by a species of fish. As soon as this has exterminated the bladder snail, it lacks the nutritional basis and shows symptoms of deficiency.

What are bladder snails?

Bladder snails belong to the water pulmonate group and live in fresh water. Typical is their left-hand winding housing that tapers or blunt. It is true that bladder snails have secondary gills with which they can draw oxygen from the water. Nevertheless, they occasionally have to go to the surface of the water to fill up their gas bubble in the housing. They absorb the oxygen through the mantle tissue.

Many aquarium owners are afraid of the bladder snail. They worry about their aquatic plants and the spawning of other living things. But bladder snails are completely harmless and anything but harmful. They prove to be extremely useful because they are considered indicator organisms and indicate errors in aquarium care. The snails play an important role as regulators, because they use excess food and dead remains.

The snails react extremely to the conditions in their habitat. If there is an excess of food, the animals reproduce in large numbers. If the food resources dwindle, the animals stop their mating activities. You should only add as much food to the water as the fish can eat. Make sure that no large amounts sink to the bottom.

Can you breed bladder snails?

The animals can be bought in stores, because many aquarium owners use bladder snails as food for their fish. Bladder snails can be grown in the aquarium with simple means. During the summer months you can put them in the garden pond. Bladder snails are tolerant and tolerate cooler temperatures. The optimal water temperature is between 22 and 25 degrees Celsius. Sea water is not suitable for breeding because the animals live in fresh water.

Where do bladder snails live?

Many of the 80 or so species of bladder snails were brought out of their original range so that they could spread widely. The climatic conditions represent the limit of spread. Bladder snails live in stagnant or slowly flowing waters. They prefer a dense vegetation, because this serves as a food base, hiding place and spawning place. Four species are known in Germany, with one species being introduced from North America.