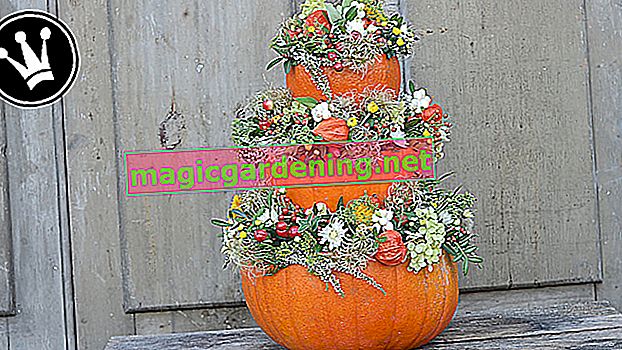 DIY watering with bottles and other tools

Simple systems work most cost-effectively, in which you insert the water storage container directly into the substrate of the potted plants and these gradually release the precious liquid to the roots. For this you can use simple PET or glass bottles with solid walls (important! Bottles with flexible walls do not work!), Which you fill with water and then simply stick upside down in the pre-watered substrate. To prevent too much water from running out at once, you can leave the lid on the bottle, but of course you have to perforate it. Instead, screw-on irrigation cones made of clay or plastic can also be used, which also reduce the amount of water released. Irrigation balls, which are usually made of glass or clay, work on a similar principle.

If you have a lot of smaller pots on your balcony that need to be taken care of during a short absence, you can place them in the bathtub, which is lined with thick towels and about five centimeters high with water, even without a planter. If you don't have a bathtub, a paddling pool or other large enough container will do the same thing. Instead of towels, you can bed the pots in plant granulate (e.g. perlite) and moisten them with water. The granulate stores a lot of water and at the same time offers the advantage that the roots of the plants are not directly in the wet. However, be careful not to place the plants in direct sunlight. Instead, they should be shaded so that less water is used.

Make a drip irrigation for the balcony yourself

A permanent solution, on the other hand, is self-made drip irrigation that works without an extra electricity and water connection. All you need is a sufficiently large water tank (at least 300 liters capacity), standard garden hoses that can be connected to one another and the appropriate irrigation cones (e.g. from Blumat). And this is how you set up the system:

If the system runs smoothly, all you have to do is top up the water reservoir regularly.

Even submersible pumps do not only work with an external power connection. Instead, you can also use solar or battery-powered variants.