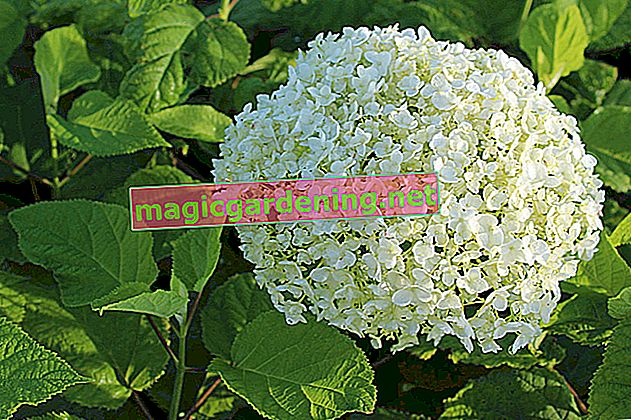 Snowball hydrangeas: cut back in spring

Usually hydrangeas are divided into two groups with regard to pruning measures: The first group blooms on the old wood of the previous year and must therefore not be cut back in spring. The second group, which also includes the snowball hydrangeas, on the other hand, bloom on this year's new wood and should therefore be pruned vigorously in spring. The shade-friendly snowball hydrangea “Annabelle” can even be cut back almost to the ground. This results in a more abundant set of flowers with particularly large flower balls. However, especially with younger specimens, a moderate pruning is sufficient. When cutting, it is best to proceed as follows:

The snowball hydrangea “Annabelle” should be pruned from March, but no later than April. This measure is particularly important if the old shoots have frozen back in winter. Dead plant parts and frozen shoots not only look ugly, but also offer fungi and viruses the best living conditions.

To encourage continued flowering, always cut off anything that has faded. When the flowers have been pollinated, the plant forms seeds and essentially uses its energy for this. This is at the expense of further flower formation. But if it is prevented from doing so by continuously removing the faded inflorescences, the plant will produce new flowers over a longer period of time. If you cut back some of the shoots again around mid-June, the overall flowering will be delayed - after all, “Annabelle” will bloom as early as June - but will continue into September. Regularly cutting out everything that has faded also stimulates further flower formation, whereby “Annabelle” fades very nicely.As the flowers fade, the creamy white flowers turn light green and ultimately keep this green color for a long time.

Incidentally, the hydrangea seeds are hidden in the inner, fertile part of the flower - the magnificent flowers that we like so much on hydrangeas are just sterile show flowers. Therefore you should not hope for seeds to propagate the snowball hydrangea “Annabelle”, but instead use cuttings. Multiplication by division also usually works very well.