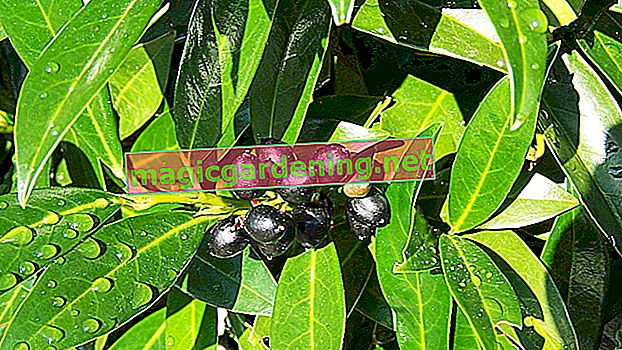 On the leaves infected with shotgun gunshots, brown spots with a reddish border initially appear, which later dry up and are shed. The fungal mycelium causes wounds on the shoots and branches that heal poorly.

Since the fungus overwinters in the diseased shoots, fruits and fallen leaves, it infects the young leaves again a short time after they have sprouted. In damp weather conditions, it spreads explosively and also affects other woody plants such as cherry, plum or peach.

Infestation with the bacterium Pseudomonas syringae

If it is not fungi but bacteria that are the cause of holey leaves, the foliage of the cherry laurel shows circular necroses that are surrounded by a light green halo. The fruiting bodies typical of the shotgun or a fungus coating are missing. As the disease progresses, the spots become clearly demarcated from the healthy tissue and eventually fall out of the leaf.

Damp weather promotes the spread of the bacterium, which is why the plant disease is often mistaken for shotgun. From May onwards, it is primarily the freshly sprouted leaves that are infected by the bacterium, while the shotgun shows itself on both the old and the fresh leaves.

The remedy is consistent pruning and treatment with copper preparations. Since the bacterium is only reliably destroyed at temperatures above sixty degrees, all infected parts of the plant must be disposed of with household waste.

Some cherry laurel species are very likely to get shotgun while other varieties are largely immune. When creating a new hedge, it is preferable to choose resistant species.