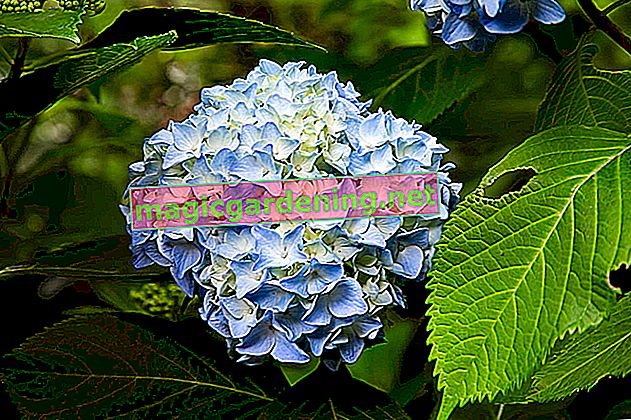 Like so many types of hydrangea - such as the popular farmer's hydrangea - the velvet hydrangea also flowers on perennial wood. The flower buds for the following year develop at the end of the flowering period in the previous year and are also located right under the faded flower plates. For this reason, the dead flowers should not be removed in autumn, but only in spring after the last late frosts - they serve as effective winter protection for the new buds. Annual pruning is not necessary, on the contrary: Such a measure would reduce the plants' flowering pleasure.

Nevertheless, you should rejuvenate your velvet hydrangea about every three years to prevent it from aging. This threatens, for example, when the bloom subsides. You can also cut with confidence if the velvet hydrangea does not grow as desired. In this case the flowering fails or is reduced, but since the velvet hydrangea is very pruning and can also sprout from sleeping buds without any problems, even more radical pruning remains without further consequences.

For the rarely due pruning, you can proceed as follows:

On the other hand, dead or diseased shoots should be removed as soon as possible throughout the year. They weaken the plant and represent a gateway for viruses, fungi and other pathogens.

In spring, cut young velvet hydrangeas just above the pairs of eyes (and be careful not to cut away any flower buds!). With this measure, you promote strong branching and thus more flowers in the future.