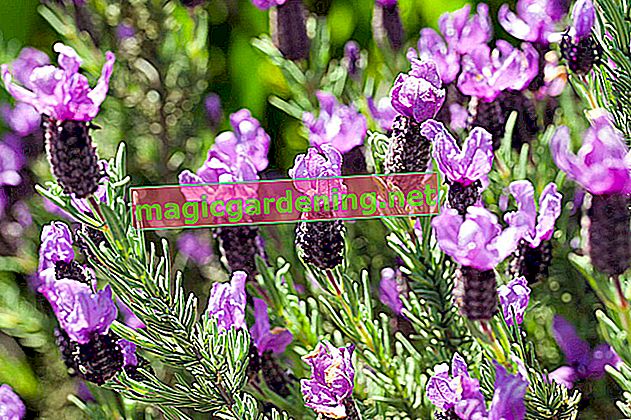 The lavender, botanically Lavandula stoechas, comes from Mediterranean regions like the better-known real lavender. Its distribution area also extends further south, namely to northern Africa on the Canary Islands and Madeira. Its original habitat is therefore a little warmer than that of real lavender. For cultivation in Central Europe, this means that it cannot be planted permanently outdoors. In contrast to real lavender, it is not frost hardy.

What you need to know about the origin of the French lavender:

The Schopflavender grows as an evergreen subshrub with particularly strongly branched shoots, which gives it a very bushy habit. In its natural environment it can reach a height of up to one meter. In this country in the pot culture it is only 30-50 cm high. The shoots are densely covered with foliage and give the crested lavender a very compact appearance.

The leaves of the potted lavender have a needle-like, lanceolate shape, similar to that of the real lavender, and reach a length of up to 4 centimeters. When they shoot they are still of a silvery green color, later they darken to a fir green. Aside from the flowers, the leaves also give off a spicy, aromatic scent reminiscent of pine needles.

The flower is the namesake for the coppable lavender. Their special feature are the light purple bracts that stand like tufts over the grape-like panicles. They give the shrub as a whole a cheerful, relaxed accent, not least because of the color contrast between the dark, mauve-colored flower panicles, the light bracts and the brownish, felty bracts.

The scent of the flowers is particularly appealing, as it is particularly strong and spicy like camphor. It not only attracts numerous useful garden insects, but also invites you to experiment with aromatic, homemade cosmetics or delicacies.

The characteristics of the topped lavender flower:

The flowering time is slightly dependent on the variety. The earliest varieties open their flowers at the end of May, the latest in September.

The requirements of the potted lavender for its location do not differ significantly from those of the real lavender. He wants it warm and dry with as much sunlight as possible. The more sun, warmth and dryness he experiences, the more intensely he will concentrate on the production of the fragrant essential oils. So pay particular attention to the fulfillment of its original location conditions if you want to attract a lot of bees and possibly make something nice out of the flowers.

What distinguishes the potted lavender significantly from the real lavender is its preferred pH value. In contrast to its conspecifics, it needs a plant base with little lime. So the earth should be acidic. Nevertheless, it thrives best in permeable, poor, heather-like soil that has a good proportion of sand. It is advisable to use special cactus or herb soil and loosen it up accordingly with sand or clay granules.

Like the real lavender, the topped lavender doesn't need much water. It is naturally adapted to long periods of drought and extreme heat. So water it only moderately so that the soil never stays dripping wet. You should use as soft, stale water as possible as irrigation water, ideally rainwater.

The topped lavender is also frugal in terms of nutrients. He loves a poor substrate and basically does not need to be fertilized at all. You may be able to give it a little low-dose, potassium-rich fertilizer after wintering or use fertilizer sticks (1.45 € on Amazon *) to encourage vigorous budding.

As a non-winter hardy species, the coppable lavender has to be cultivated in a pot - at least over the winter. Basically, you can transplant it outside in the summer after the ice saints are over - provided you can offer it a suitable place and planting ground. At the latest when the first frost is announced, you have to move it back into the pot.

A terracotta pot is best suited as a planter for the potted lavender, as it is absorbent and promotes a dry soil ball. In addition, the material underlines the Mediterranean character of the plant.

In the pot, you have to pay particular attention to good permeability of the substrate: So work a coarse drainage layer made of expanded clay (€ 17.50 on Amazon *) into the lower part of the sandy soil mixture.

You should repot the potted lavender in early spring when you take it out of winter quarters. If necessary, you can thin out the roots to encourage growth.

The rules for pot culture at a glance:

Like all non-frost-hardy cultivated plants, the potted lavender needs a separate wintering phase. In view of its northern hemisphere origin, it must be protected from freezing temperatures during this time, but it still needs a temperature reduction compared to the summer phase. Because the winter season is of course not unknown to him. The ideal winter temperature for him is around 5 to 10 ° C. He should still have it bright. A suitable wintering place is a cold house, a window seat in the unheated stairwell or in an attic under a skylight.

The potted lavender is only poured very sparingly in the wintering quarters. Even in summer it needs little water, in winter the watering amount should be reduced so that the pot ball does not dry out completely.

Within the species Lavandula stoechas there are also conditionally hardy varieties that can also be planted permanently outdoors. Nevertheless, this is only recommended in rather mild regions, where winter temperatures rarely drop below freezing point. However, if there are occasional phases with critical freezing temperatures, such a potted lavender variety can also be protected by covering it with fir branches or jute.

You should cut back the lavender once after the first flowering. For two reasons: on the one hand, the truncation induces a second flower, which you and garden insects can look forward to. On the other hand, the regular cut keeps the shrub beautifully compact and dense, which corresponds to its typical habit and ensures a well-groomed impression. In addition, the pruning also serves to avoid excessive lignification and unsightly balding.

In order to support the compactness even more intensively and also for rejuvenation, you can cut back the potted lavender a little after it has been wintered. In February or March, when you start to get him used to warmer temperatures again, a precise pruning will do him good. This also stimulates vital new growth.

The easiest way to propagate the crested lavender is by cuttings. To do this, cut young shoots about 10 cm long, free them from the lower leaf green and put them in planters with potting soil. You can cover them with foil to ensure a uniform, protected growth climate. The planters must be light and warm.

Seed cultivation also promises a fairly high rate of success for the poppy lavender. You can also harvest the seeds yourself and store them over the winter. From the end of February, when the mother plant is ready for winter, place the seeds in seed trays with potting soil and, if so, cover them only very lightly, as these are light germs. Place the bowls in a bright, warm place and carefully keep the substrate moist. The seeds usually germinate after a week or two.

Due to its high content of essential oils, the potted lavender is pleasantly resistant to diseases and pests. What is most likely to harm it is too much moisture. It can rot the roots and lead to mold growth. If necessary, a fungus then also nests, which, however, is seldom the case. In this case, remove all diseased parts of the plant as early as possible and use a fungicide.

Basically, lavender is naturally edible. It does not contain any toxins and is particularly valuable due to its high content of essential oils.

How it becomes palatable, however, is another question. Because its rather tough, scratchy plant structure and the very intense, almost austere scent of leaves and flowers do not make it a delicacy that can be eaten raw. But: It is ideal for flavoring fine dishes. The plant parts are not likely to be eaten, but it is possible.

Due to its dry, ethereal flavor, the Schopflavender is suitable for flavoring both desserts and hearty dishes. Lavender sugar, for example, is great for a floral note in cakes and the like, while lavender salt provides a very interesting note in stewed meat dishes. It is also advisable to add a lavender blossom to each glass when you are boiling home-made jams, such as apricots or peaches.

Last but not least, oil can also be wonderfully refined with flowers and fresh shoots of French lavender. It gives wild herb salads in particular a fragrant note.

Dried flowers can also be infused into an aromatic, flowery and healing tea that has a digestive and relaxing effect.

If you plan to plant out your potted lavender in summer, it is best to choose a south-facing slope. Due to the slightly vertical position, the southern plant can soak up even more sunlight. Stones in the immediate vicinity of the bed also provide the shrub with cozy radiant warmth even after sunset.

This variety is characterized by panicles in clear, reddish purple and particularly long bracts in light purple. The bracts are so long that they tend to overhang and thus form a sweeping tuft. The flowers of the Lavandula stoechas Butterfly Garden appear in July and can be reproduced until October if the faded stands are carefully cut back. They give off a pleasant scent and are a valuable source of nutrition for bees and other insects.

With a height of 40 to 80 centimeters and a width of only 20 to 30 centimeters, the variety shows a very tight, slender growth.

Particularly with the Lavandula stoechas Butterfly Garden is its noteworthy frost hardiness. In generally milder regions of the country, it can therefore also be cultivated permanently in the open air.

The variety series Lavandula stoechas Madrid is available with different flower colors, which is quite special within the potted lavender species. Because here the color spectrum goes beyond the typically dark, dull purple. With sub-varieties such as Madrid Pink, Madrid White or Madrid Sky Blue, more cool freshness is drawn into the appearance of the potted lavender: Madrid Pink shows panicles in a slightly clearer purple and bracts in light rosé, Madrid White a completely white flower. With its night sky blue panicles and the contrasting, fresh white bracts, the Madrid Sky Blue is particularly decorative and appealing.

The Lavandula stoechas Madrid begin to open from around June, by continuously cleaning the faded panicles you encourage their new formation.

All Spanish lavender varieties have typically silver-green foliage and are around 40-60 cm high with bushy, around 90 cm wide growth.

Lavandula stoechas Kew Red is also very attractive and brightly colored. As its name suggests, its flower color is reddish. The panicle is a rich, velvety magenta, from which the bracts stand out in a delicate white-pink. In addition, the pretty structure exudes a strong, very seductive scent. The refreshing splendor of flowers appears from July and unfortunately ebbs again in August. In terms of height, the Kew Red is somewhat smaller at around 40 to 50 centimeters and, with a narrow width of 30-40 centimeters, also significantly slimmer than many of its conspecifics.