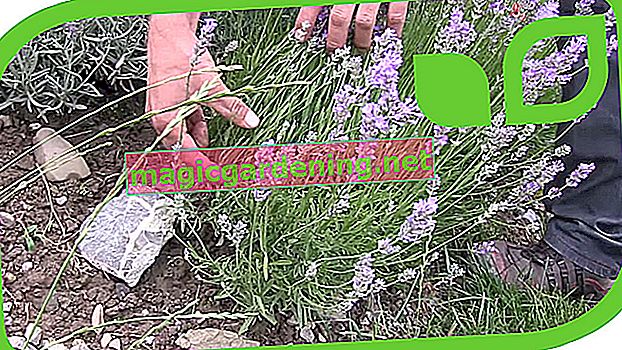 Why do you have to cut back lavender?

From a botanical point of view, lavender is a sub-shrub. As such, the vigorously growing plant - many varieties of lavender can grow up to a meter high and just as wide - tends to lignify from below with increasing age. Where the lavender is already lignified, neither new leaves nor flowers grow. In the gardening language, this phenomenon is called "balding". With good care, lavender bushes can live to be at least 10, sometimes even 20 to 30 years old - and then, uncut, look pretty bare. Only regular pruning prevents the lavender from doing so and ensures that it sprouts new shoots and flowers every year.

It all depends on the right time

In Germany trees and bushes are mostly pruned in autumn. For the sensitive lavender, however, an autumn cut is fatal, as it deprives it of the power to overwinter. The faded inflorescences in particular offer the plant a certain protection from the cold. It is better to cut the lavender in early spring, before the first new shoots start to grow. As soon as the plant starts to flower again - which can be the case with the potted lavender as early as May - it is already too late for a topiary. Ergo, you should cut your lavender back in March, at the latest in April, if the weather permits. A warmer period without frost but with a lot of sun is ideal.

If you prune back the faded inflorescences in July, but no later than the beginning to mid-August, you will encourage your lavender to flower a second time. However, if possible, you should not cut later, as otherwise the plant cannot mature - and there is a high probability that it will die in winter.

When cutting the lavender, be sure to keep the following points in mind:

Can you rejuvenate lignified lavender?

Rejuvenating heavily lignified lavender is a difficult endeavor. Mostly, heavily cut bushes do not survive such a measure, because lavender only very rarely sprouts out of the old wood. Dividing very old plants is usually not possible due to the heavy lignification. It is better to propagate the plant with cuttings instead and start over. This time, however, you should pay attention to a regular topiary.

Lavender can often be raised wonderfully as a tree, whereby regular and correct pruning is all the more important in this case.